Android and Samsung steal the show in comScore October report

When it comes to statistics on mobile devices, there’s one name that shows up in our news readers more often than any other – comScore – and today’s results are in, October 2011 on the docket, and they’re full of Android and Samsung for the win. The first chart you’re going to see is a comparison between this summer’s July and the month of October, and the results are clear on the top smartphone platforms in the comScore polls of these months: while RIM, Microsoft, and Symbian all fall by point percentages, both Apple and Google (Android) rise, with Google jumping 4.4 points. Looks good for the robot-based operating system so far.

Then there’s a set of results that show the manufacturers of devices, these manufacturers carrying in some cases more than one mobile OS. The months of July and October are again shown, Samsung and LG taking the highest portions of the pie in both cases. On the other hand, Apple did rise between these months by 1.3 percentage points while LG fell by 0.3 and Samsung stayed exactly the same. Those points may seem small here, but with thousands and millions of devices sold a year, little points can mean a lot. Meanwhile Motorola sits in the third spot in both months, falling 0.5 percent between the two, and RIM remains at the bottom with less than 10% of the market and a 1 percentage point loss between the two months. 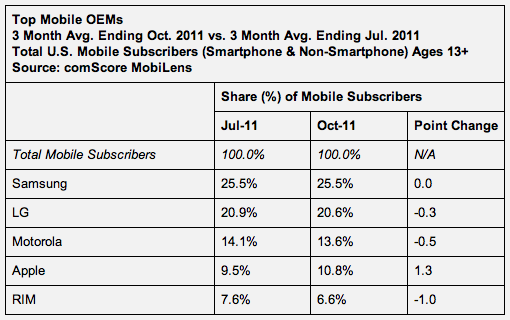 Then there’s an odd chart that again shows the difference between July and October of 2011, this time showing off the mobile content usage of those people polled in this most recent set of polls. The top place in this chart is shown to be “sent text message to another phone” by a wide margin, this option jumping up in the middle-range of increase between the months at 1.8 percent. The lowest jump is also the lowest option on the chart chosen by users, that being “listening to music on a mobile phone.” Second from the top is “used browser” followed by “used downloaded apps”, both of these percentages jumping by right around 3 percent between the two months. THe remaining two options aren’t quite so sparse as the music option, but are relatively low compared to the rest: “played games” and “accessed social networking site or blog.” Imagine that! 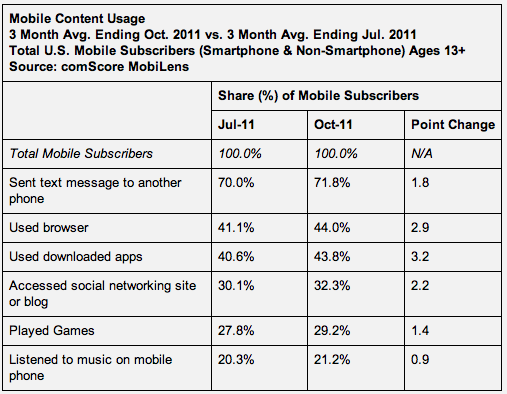