Research firm comScore has just released its latest figures that unsurprisingly show continued growth for both Google and Apple in the US smartphone market. Google’s Android is seeing a steady upward climb now reaching 43.7 percent market share, while Apple’s iPhone seems to be slowing a bit with smaller incremental changes. It’s recent launch of the iPhone 4S, however, may give it a boost.

Apple is now at 27.3 percent, which is only about a 0.3 point change from the month before, while the month prior to that it had a 0.4 point change. Still, Apple is now further ahead of RIM by 7.6 points, a gap that’s been steadily widening as the BlackBerry maker continues to lose market share, mostly attributed to its customers converting to Android devices. RIM has dropped to 19.7 percent market share.

When it comes to smartphone manufacturers, Samsung and Apple are the only two seeing more consistent growth over the last few months. However, Samsung has the most market share at 25.3 percent, followed by LG at 21 percent, Motorola at 14 percent, Apple at 9.8 percent, and RIM at 7.1 percent. 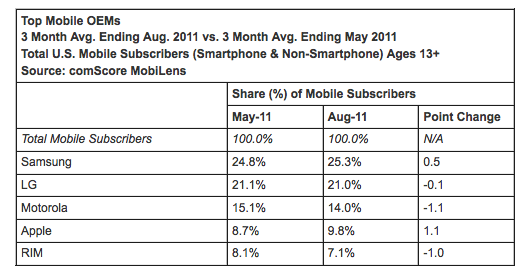