NASA has revealed the spacecraft that the new Mars rover will use to travel to the red planet in 2020, as the US space agency continues to pave the way for an eventual manned mission. Mars 2020 will see a brand new rover set loose on the surface of the planet, complete with a toolkit of all-new instrumentation to do research.

It won’t be NASA’s first rover on Mars, of course. Four previous rovers have been deployed to the red planet, all managed by the Jet Propulsion Laboratory at NASA.

First came Sojourner, the Mars Pathfinder. That landed on Mars on July 4, 1997, and remained operational until communications were lost a little over two months later. Spirit followed, landing on January 4, 2004. Although NASA only intended it to operate for a relatively short period, Spirit managed to keep transmitting until March 22, 2010.

Opportunity came shortly after, landing on January, 25 2004. It managed to operate for fifteen years, until a dust storm in 2018 blocked its solar panels and the rover died. Finally, Curiosity was landed on Mars on August 6, 2012, and is still operational. 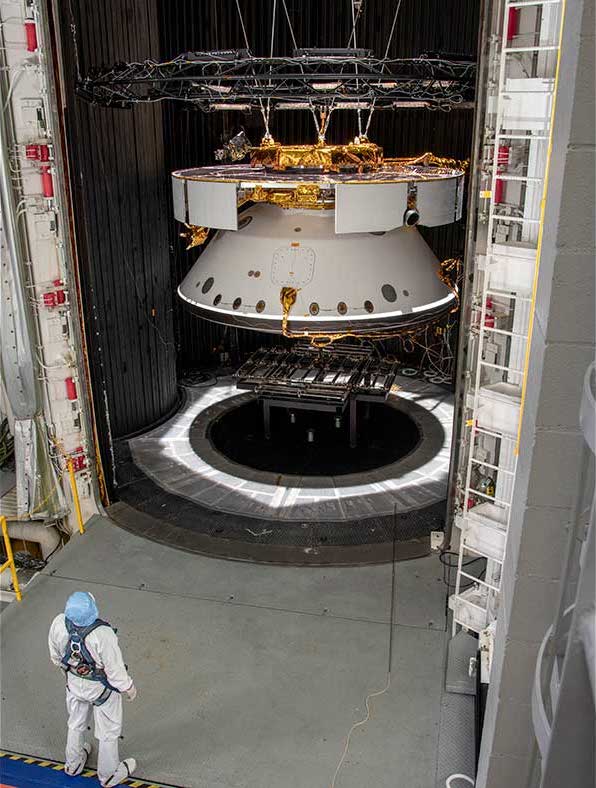 Each rover has utilized different tools and instruments to carry out different research. The Mars 2020 rover is expected to operate for at least a Martian year – approximately 687 days – and will wield a drill so that it can take coring samples from soil and rocks. NASA isn’t planning on bringing those samples back from Mars, but hopes this “sample caching” could be a first demonstration of a process that might eventually allow such extracts to be brought back to Earth.

Of course, it needs to get there first. To do that, NASA will use the Mars 2020 spacecraft, the complete cruise stage of which is being shown off assembled for the first time. It’s atop the white and black aeroshell, that is used to protect the vehicle both as it cruises to the planet, and as it descends through the Martian atmosphere.

A rocket-powered descent stage is inside the aeroshell, meanwhile. NASA used a replica rover – about the size of a car – to simulate the space it will occupy, since the real rover is still being constructed. Altogether, the spacecraft will take around seven months from its launch from Cape Canaveral Air Force Station in Florida in July of 2020, before – if all goes to plan – it lands at Jezero Crater on February 18, 2021.

To do that safely, it’ll need a big parachute. NASA demonstrated that technology in action last year, with a record-setting deployment of a test ‘chute from a Black Brant IX sounding rocket.