Citrix Nirvana phone lets you leave the laptop at home

Smartphones have been around for years, Google want to coin Superphone and now Citrix and Open Kernel Labs are pushing their idea of the Nirvana phone; if there’s one thing you can say about the mobile segment it’s that it’s never short of a niche or two. Nirvana, say Citrix, is being able to leave your laptop at home or at the office, and instead rely on your smartphone, not just for cut-down mobile versions of apps but, after plugging in full-sized peripherals, having exactly the same access to your main system as you would sat at your desk.

According to Citrix’s research, 70-percent of people would prefer to leave their laptops at home during a trip. However the risk of being caught short without a system means they can’t. A Nirvana phone, then, uses mobile virtualization to deliver the “full productivity experience”, replicating the home or work environment from any location with wireless coverage.

Citrix and Open Kernel Labs are talking a lot about enterprise use for the Nirvana phone, but we were more interested in how mainstream consumers might make use of the technology. The premise is simple: the duo are pushing for a reference design of sorts that future smartphones would adhere to, a checklist of functionality that will tally against the Nirvana phone specifications. None of it is especially unusual, given the way the mobile chipset market has been progressing: Bluetooth 2.0+ with full HID support, USB 2.0+ Host support, WiFi and 3G data, a video output such as HDMI or VGA (not merely TV-out) and at least an ARM 528MHz processor paired with 256MB ROM and 192MB RAM. 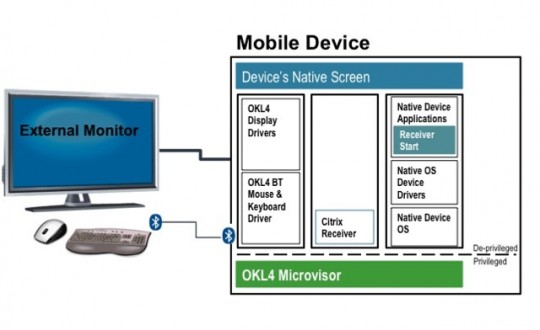 Compare that list against something like Qualcomm’s Snapdragon, NVIDIA’s Tegra or Texas Instruments OMAP4 and there’s nothing unusual to be found. What it allows for, however, is virtualization of a home or business system; think of it as turning your smartphone into a thin client. It’s all platform agnostic, so we can expect to see it on the usual suspects – Windows Mobile, Android, Symbian, maybe even iPhone OS – and if device manufacturers implement it right you still have access to core phone functionality while you’re working.

Citrix expect their enterprise clients to jump at the chance: give employees a smartphone rather than a laptop, safe in the knowledge that they can plug in a full-sized display and peripherals and work, as if in the office, wherever they are. As Nirvana phone compliant devices proliferate, however, we wouldn’t be surprised to see consumer-focused services offer the benefits of hosted virtualization to users outside of the enterprise. Imagine, say, Google offering a free virtual environment to Android smartphone owners – hook up a display and a keyboard and you’ll get full access to your Google Docs account – or for a small monthly fee to your ISP having the flexibility to leave your laptop behind when you next travel.

Of course, before we see that Citrix and OK Labs need to persuade handset manufacturers to fettle their devices to suit the Nirvana phone platform. They’re already working with some big names, apparently, though they wouldn’t reveal exactly who’s on board; expect something toward the end of this year or early in the next. For the end-user, however, it would all be temptingly straightforward: plug in the display, Bluetooth-connect your keyboard (or drop it into an optional docking station) and get going. Considering how often we’re to be found dragging a laptop around, just in case of breaking news, we can’t wait.

Communications Platform Builds on Mobile-to-Enterprise Virtualization Giving IT & Mobile Workers a Single Device in the Office, on the Road, and at Home

CHICAGO – February 2, 2010 – Open Kernel Labs (OK Labs), the leading global provider of embedded virtualization software for mobile phones and broadband Internet devices, and Citrix Systems, Inc. (NASDAQ:CTXS), today announced the “nirvana phone” reference architecture, using virtualization to enable both mobile communications and office desktop-type productivity. The nirvana phone concept goes beyond traditional smart phones by allowing users to access their corporate virtual desktop and applications from a single device, in any location. With support for docking to full-sized displays, keyboards, mice and other PC-type peripherals, nirvana phones will offer mobile workers a complete “virtual desktop in your pocket”, allowing them to take their desktop anywhere without the need to carry around a full laptop.

The nirvana phone reference architecture emerges from the partnership between OK Labs and Citrix, together with key ecosystem partners ranging from semiconductor suppliers and handset OEMs to enterprise IT suppliers and mobile network operators (MNOs). The design builds on Mobile-to-Enterprise (M2E) virtualization and readily-available functionality like mobile virtualization, cloud computing and wireless connectivity (3G, WiFi, Bluetooth). The nirvana phone reference architecture also incorporates emerging capabilities in mobile chipsets and handsets like full resolution video and HD output. The jointly-developed reference architecture can be viewed at http://www.ok-labs.com/whitepapers/sample/the-nirvanaphone-concept-spec-and-reference-architeture

“The nirvana phone takes smartphones to the next level by bringing M2E from paradigm to platform and ultimately to product,” noted Chris Fleck VP of Community and Solution Development, Citrix. “As HD video and other capabilities come on line in mobile chipsets, Citrix and OK Labs are working together to give OEMs a clear path to building handsets that meet the needs of IT organizations and mobile workers alike, delivering virtual desktops and applications to virtualized mobile devices.”

“The nirvana phone will provide groundbreaking capabilities without breaking IT budgets with exotic technology,” said Steve Subar, President and CEO, OK Labs. ”The nirvana phone represents a near-term paradigm shift – OK Labs, Citrix, and our ecosystem partners envision real-world converged nirvana devices enabled for both mobility and desktop productivity entering the market within 12 to 18 months.”
Mobile-to-Enterprise (M2E) Virtualization
Citrix Systems is both a strategic investor and a key partner for OK Labs, working with the company to provide solutions for delivering enterprise applications to mobile with M2E virtualization. The companies’ combined technologies, including Citrix desktop virtualization and the OKL4 mobile virtualization solution, promise easily-deployed and securely-managed access to enterprise and desktop applications from wireless devices. M2E virtualization enables end users to leverage a single device, bridging corporate and personal worlds without risk of compromising company data, applications, or networks.
Learn About the Nirvana Phone – February 9, 2010 Webinar
The joint event from OK Labs and Citrix will give participants insight into the details of the nirvana phone design and the benefits it provides.