Our cars are getting smarter. Need some proof? This latest driver assistance technology is so smart that it can predict the future. Of course, not predicting the future like a fortune teller or psychic, but predicting when certain problems with certain components might happen, even before they have the chance to happen, allowing drivers to take preventive measures instead of just putting out fires Chevrolet calls this Driver Assurance and it will be coming in next year’s models of the car maker’s line.

Chevrolet’s upcoming vehicle diagnostic system is tied up with OnStar 4G LTE, the recent connectivity platform developed by General Motors. Why does it need LTE connectivity, you ask? The data from sensors in certain components are sent to OnStar’s secure servers, where the data is processed and analyzed to look for potential problems that may impact vehicle performance. If any such issues exist, a notification is sent back to the customer via email, SMS, or OnStar’s mobile app. We took OnStar 4G LTE for a drive last July and had somewhat mixed results, with problems in network strength and reception in certain areas, parking spaces particularly. 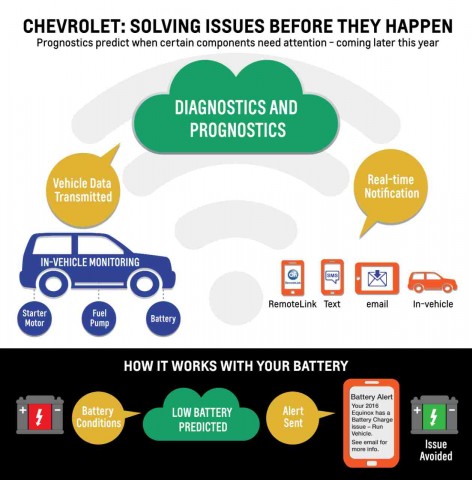 For its initial run, the predictive technology will cover key components such as battery, starter motor, and fuel pump. These are just the bare essentials for a well running car, however, and more parts are expected to be added to the list in the coming years. At the moment, Chevrolet models that already have OnStar connections actually already receive monthly reports on tire pressure and oil life of the car sent through the owner’s email. The new system, however, is more up to date and will warn users before the problem starts and not in a monthly cycle only.

The new Driver Assurance feature will make its way first into a select few, including the 2016 Chevrolet Equinox, Tahoe, Suburban, Corvette, Silverado and Silverado HD, particularly those with certain powertrains. More are promised to come throughout 2016.