ChefSteps’ Joule wants to be the iPod of home sous-vide. The Internet of Things has reached the kitchen, and few gadgets please ambitious home chefs like a sous-vide cooker. Distilling what once was limited to professional kitchens into a one-two punch of sleek hardware and user-friendly software, if Joule was any more helpful it’d be eating your dinner for you.

If you’re not already onboard the sous-vide wagon, it’s actually pretty straightforward. Professional kitchens discovered that, by suspending vacuum-sealed food in a water bath at a precisely-controlled temperature for extended periods, you could make cooking them perfectly almost foolproof. The downsides were that that precise control demanded expensive equipment, and that the extended periods could easily span 24 hours or more. 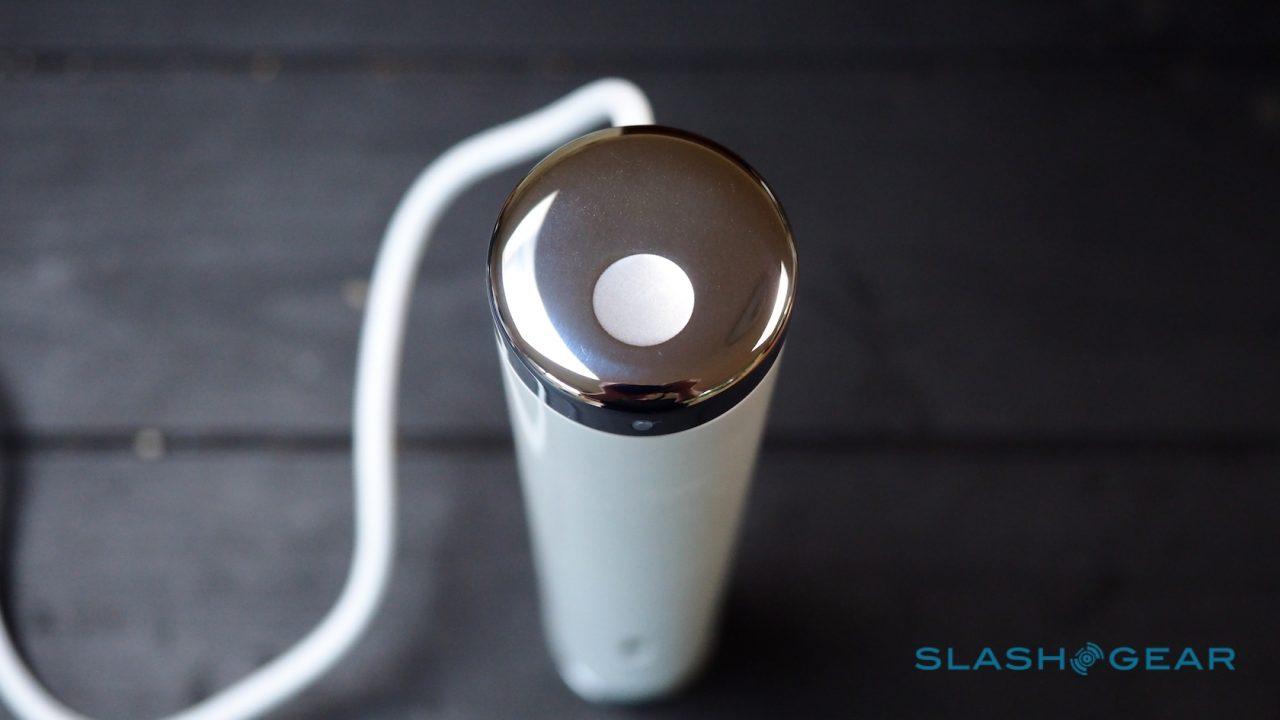 Home sous-vide cookers like ChefSteps’ Joule can’t cut the cook time, but they have made the whole thing more affordable. Rather than all-in-one water baths with integrated heating elements, Joule stands in a regular cooking pot or plastic tub. It’s under $200 and probably the smallest sous-vide out there today, not to mention easy to clean, with a simple screw-off base giving access to the removable plastic impeller blade.

Even with the rise of affordable sous-vide devices, the process still has a reputation as really being for foodie fanatics. In reality, though, as long as you can plan ahead sufficiently, it’s actually a far more flexible way to cook than many more common methods. Since the temperature never spikes, food can remain in the water bath for extended periods without overcooking or burning: if you struggle at times with getting meal timings to match up, sous-vide can actually be a huge stress-reducer. 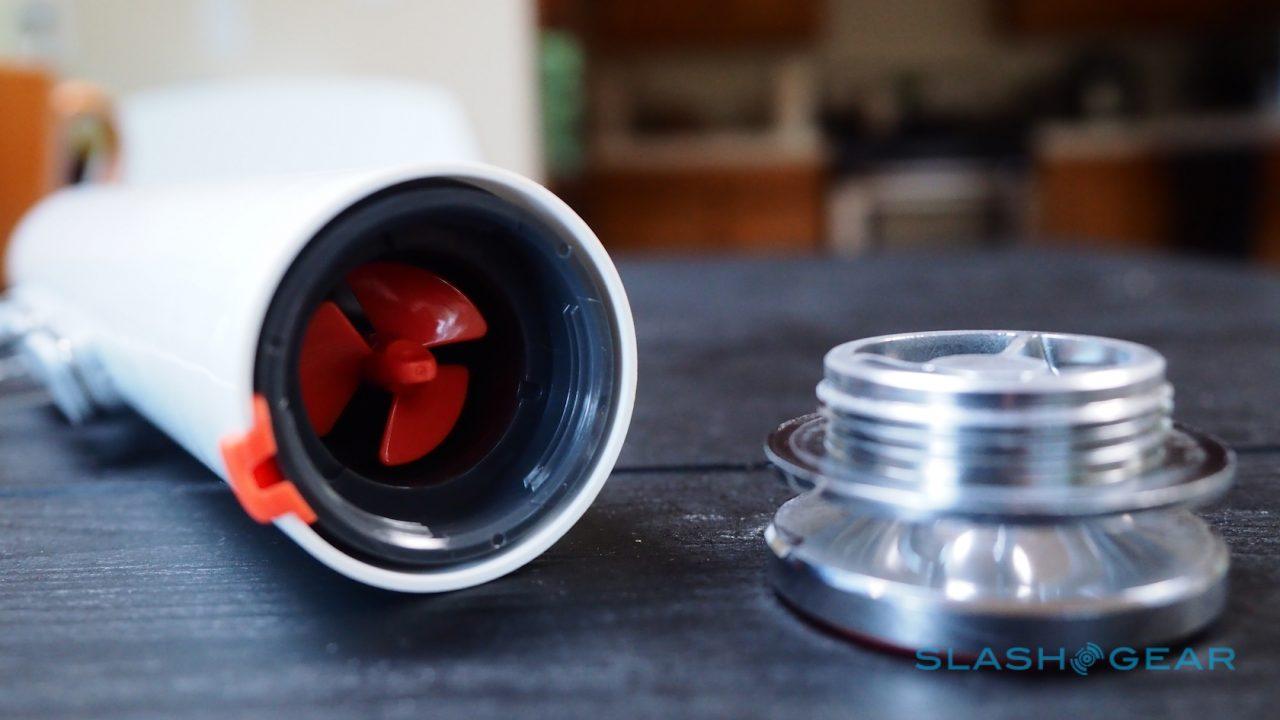 It’s definitely compact. Compared to Anova’s Precision Cooker, one of the most popular sous-vide devices out there, it’s much slimmer, shorter, and lighter; you can drop it in a cutlery drawer and have no problems closing it. Joule is easier to use, too, with a magnetic foot that clings to the bottom of a pan of water rather than the Anova’s slightly fiddly clamp. If you’re using a non-metal pan, there’s a basic clip too, though it’s not as secure as Anova’s once you’ve gone to the effort of positioning it and tightening it up.

Unlike some sous-vide devices, Joule’s base can be touching the bottom of the container, rather than demanding a circulation gap that generally increases the amount of water you require. It also doesn’t require its water outlet to be submerged. In fact, ChefSteps says that just 1.5-inches of water depth is all that’s needed, which means faster initial heating; you’ll hear the trickle as it splashes through, but otherwise Joule is almost silent. If you accidentally drop the whole thing into water, usefully it’s waterproof. 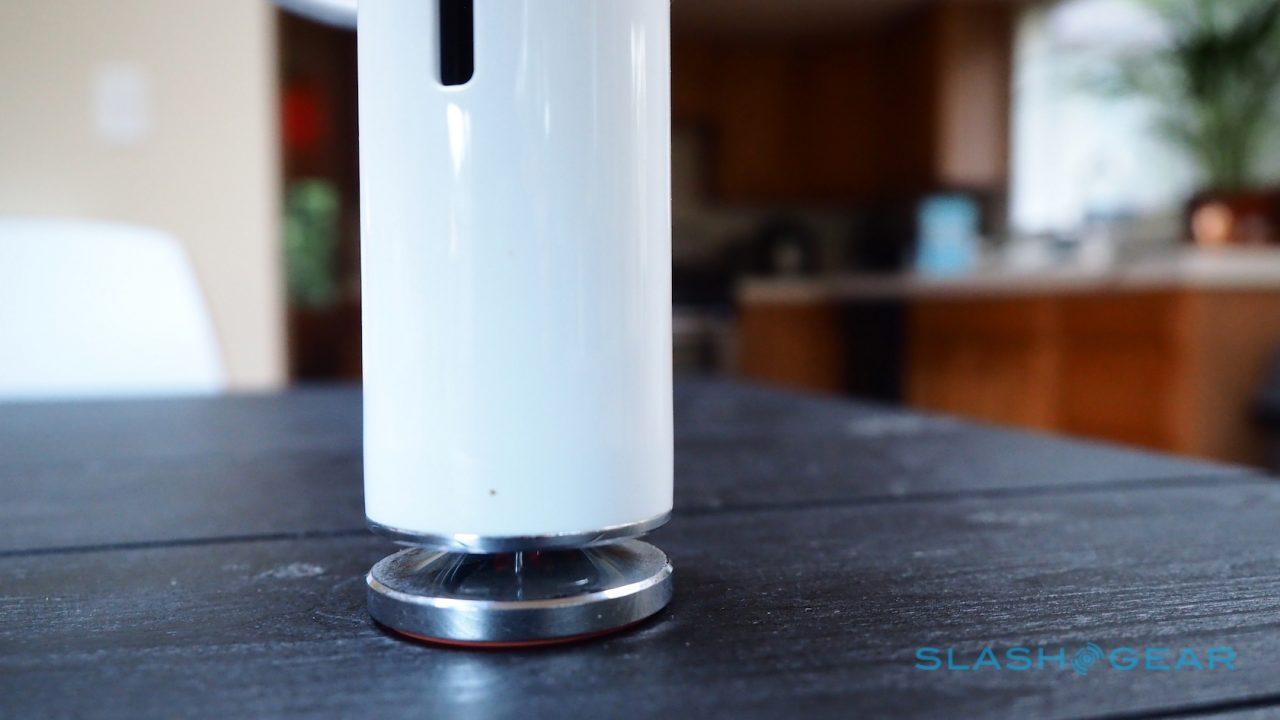 You do give up on standalone flexibility for its small dimensions, mind. Joule has a single button which basically turns it on and off, and only a status LED rather than a display; all of the temperature and timing settings are controller via the smartphone app. Anova also has a companion app for remote use, but there are basic temperature controls and a display on the cooker itself, and thus it can be used without the app.

ChefSteps’ argument is that it’s the app which makes its sous-vide so special. Yes, you can manually set temperatures and timers if you have a recipe or tried-and-true method you prefer, but the company is more proud of its highly flexible guides. Choose a meal – a pork chop, perhaps, or a fistful of asparagus – and it will walk you through preparing it, from readying the ingredients to be bagged, to cooking them in the water bath for the right length of time, to finishing them off with a sear or maybe a reduced sauce. 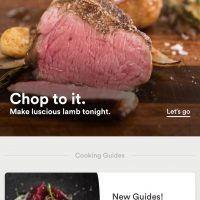 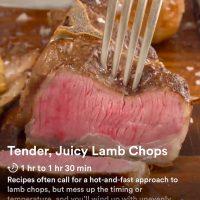 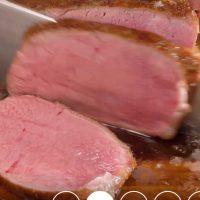 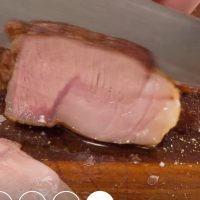 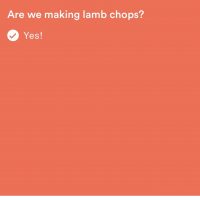 There are plenty of photos and videos to assist with more complex steps, and the Joule app also uses them to help with the most common question around sous-video: what temperature should I use? By showing short clips of the results possible – steaks cooked rare through to well-done, for instance – it’s easier to figure out not only what’s safe but what’s to your personal preferences. At the end of each recipe you can give feedback as to how you liked it yourself.

For example, I love pork chops but cooking them in a pan can be frustrating: it’s easy to leave them in a minute or so too long, and be left with a dried-out slab. With Joule, I didn’t even bother opening the vacuum-sealed pouch the two chops had come in, instead simply dropping them into a pan of preheated water and leaving them there for about an hour, as per the app’s instructions. They could, it reassured me, have stayed in there for anything up to four hours without the taste or consistency suffering. 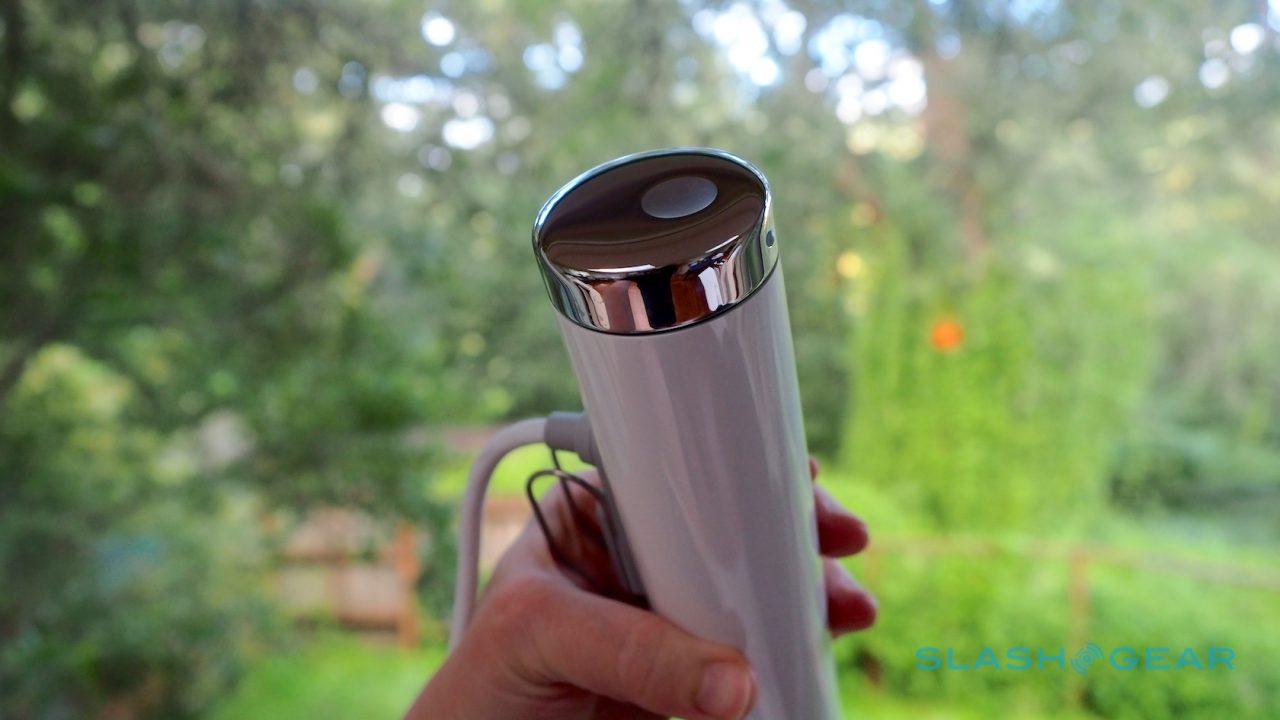 Some seasoning and a quick sear on both sides in a hot pan finished it off, since sous-vide doesn’t get to the high temperatures required for browning. Some use a kitchen blowtorch for that instead. When I cut in, it was soft and juicy, just how I like it.

Like slow-cooking, sous-vide does require you to think ahead. The times involved usually count out any last-minute meals. All the same, the ability to drop a few things into a Ziplock bag, squeeze the air out by partially-submerging it in water as you seal it up, and then leave Joule to its own devices to cook them can be a lot less labor-intensive, even if it takes more time than traditional methods. 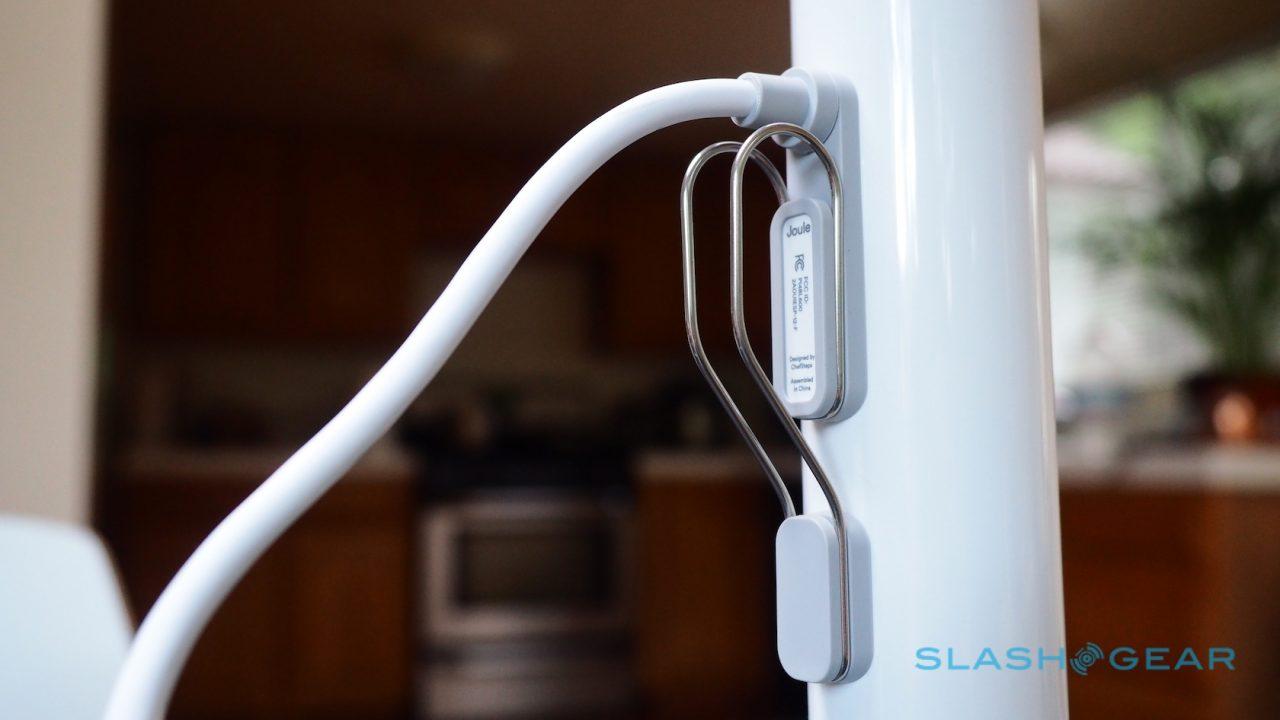 Personally, with both ChefSteps’ and Anova’s cookers on hand, I’ve found that I use the smaller Joule more often. That’s mainly for its easier setup, since I can just stand it into a saucepan of water rather than trying to fit a screw-mount at just the right height. You pay more for that convenience, mind: Joule is $199, versus $129 for Anova’s Bluetooth version (or $179 for their WiFi model).

Both can handle heating and maintaining around the same amount of water, and both have recipe-packed apps, though I found ChefSteps’ to have an edge in the usefulness of its guides. Anova has standalone functionality in its favor; Joule has its compactness and easy setup. The results on your plate are the same, but ChefSteps’ Joule’s sheer convenience has made it my go-to sous-vide cooker. 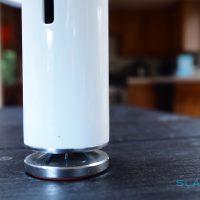 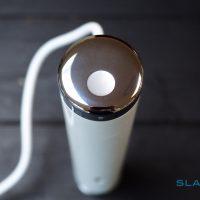 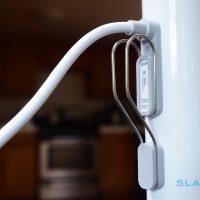 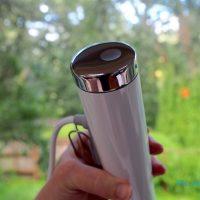 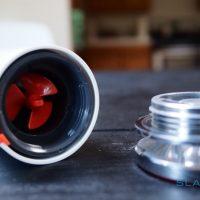