Physicists, prepare yourself a stiff drink: the team at CERN’s Large Hadron Collider beauty experiment have found results that could indicate a violation of the Standard Model of particle physics. The latest outcome of testing by the vast instrument aiming to unlock the secrets of the Big Bang and what happened in our universe right after it, the results are yet to be confirmed but could prove to be a huge upheaval in current physics understanding.

The Large Hadron Collider beauty experiment, known as LHCb, is underway at one of the four points on the collider where CERN smashes beams of protons together. Its focus is to track how particles containing b and anti-b quarks – known as “B mesons” – decay after those collisions.

“Each one of LHCb’s sub-detectors specializes in measuring a different characteristic of the particles produced by colliding protons,” CERN explains. “Collectively, the detector’s components gather information about the identity, trajectory, momentum and energy of each particle generated, and can single out individual particles from the billions that spray out from the collision point.”

According to the Standard Model of particle physics, decays involving the two types of so-called beauty quarks – known as “flavors” – should occur with the same probability. However, the LHCb findings indicate what’s being described as a “potential violation of lepton flavor universality” since the decay ratio is skewed. 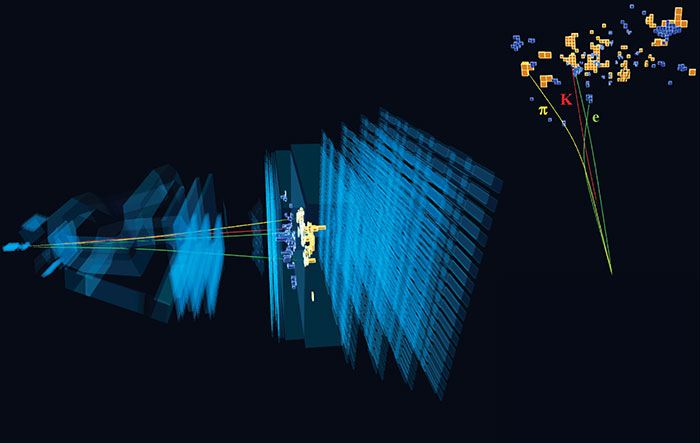 “The new result indicates hints of a deviation from one,” CERN explains, “the statistical significance of the result is 3.1 standard deviations, which implies a probability of around 0.1% that the data is compatible with the Standard Model predictions.”

It’s a small deviation, but not the first time there have been signs of such an issue with the generally-adopted thinking. Indeed, LHCb and other experiments carried out over the past decade have observed similar anomalies, CERN points out. It’s only with this newest batch of LHCb results – which focused with greater precision on the decay measurements – that the exact ratio has been figured out for the first time.

“If a violation of lepton flavor universality were to be confirmed, it would require a new physical process, such as the existence of new fundamental particles or interactions,” Professor Chris Parkes from the University of Manchester and CERN, and LHCb spokesperson, explains. “More studies on related processes are under way using the existing LHCb data. We will be excited to see if they strengthen the intriguing hints in the current results.”

The results of the study were announced at the Moriond conference on electroweak interactions and unified theories, and at a parallel seminar at CERN.

It’s still early days for the findings. In scientific terms “evidence” has a fairly specific meaning: a result that goes past 3 standard deviations, but still falls short of the 5 standard deviation level at which scientists would say it’s a full “observation.” More research will be needed to ascertain whether the deviance is an error in some way, or can be confirmed by future measurements.

The Standard Model of particle physics describes three of the four known fundamental forces: electromagnetic, weak, and strong interactions. A huge effort by scientists, it was effectively decided in the mid-1970s when quarks were experimentally confirmed. CERN’s own confirmation of the Higgs boson in 2012 helped cement the model, in fact. More data will be confirmed on the potential violation when the LHCb experiment resumes collecting data in 2022, after an upgrade to the detector has been completed.