The first presenter, the MC of the keynote, began speaking about the reason CeBIT exists – it exists as essentially “a job exchange”, made to connect companies with one another as well as with creators and developers in attendance at the conference. As Prof. Dieter Kempf stepped on stage, the chat became aimed at the market as it’s aimed in the near future. 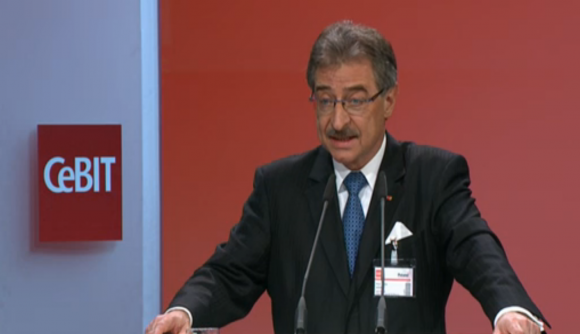 One of Kempf’s key points was the transfer from the consumer to the “pro-sumer”. This is the type of person who, when driving a car, for example, is “a user of the car but also is a developer of the car”, working with the creators of the car (and it’s software, in the future), to make it better as they use it. Another point he made was in the arena of telecommunications – making it clear that he believed that the global economy would not move forward without it. 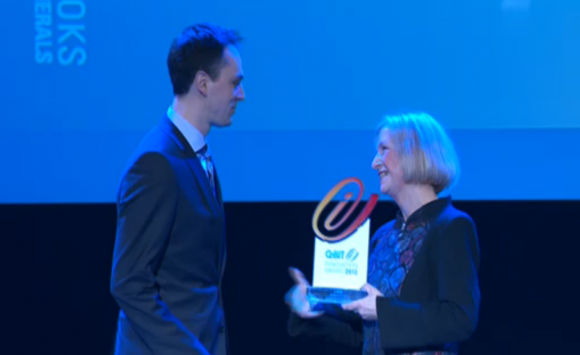 As Dr. Angela Merkel stepped on stage, the CeBIT Innovation Awards were revealed – the first prize was revealed, in fact: AILA, a “female robot” made to help with our human exploration of space. This innovation comes from the German Research Center for Artificial Intelligence and the University of Bremen.

We’ll see more of AILA soon – and she’ll be in space in the future as well, we must expect! 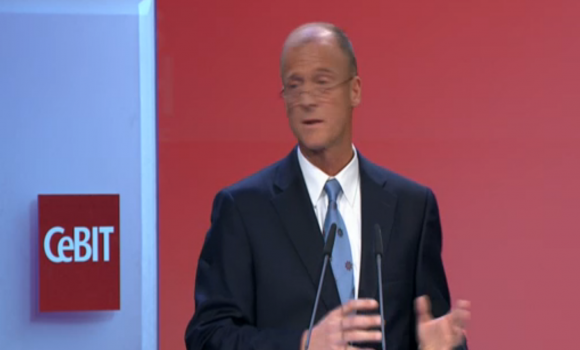 Speaking about the future once again, Dr Thomas Enders (again, of the European Defense and Space Company), spoke about how upgrades and changes in the airline industry are slow. Very, very slow – and too slow, in most cases. The difference between an upgrade cycle in a new aircraft and the technology inside of it is very, very different, and reinforced the idea that pushing for speed and innovation here with a quote from Bill Gates on Airport Transport – he called it “the original world-wide-web.”

A musical interlude was shown featuring two musicians creating images on the big screen with their musical machines. This absolutely awesome interactive display showed games like PONG, flashed multi-colored digital rainbow streams, and displayed statistics about the Polish-influenced electronics industry. A lovely barrage of tunes were heard while it all went wild.

Finally up on stage was the Prime Minister of the Republic of Poland, mister H.E. Donald Tusk. He made it clear that opening CeBIT 2013 with Germany was an honor, and that this event was certainly the world’s most important meeting place for the IT and Telecommunication industries. 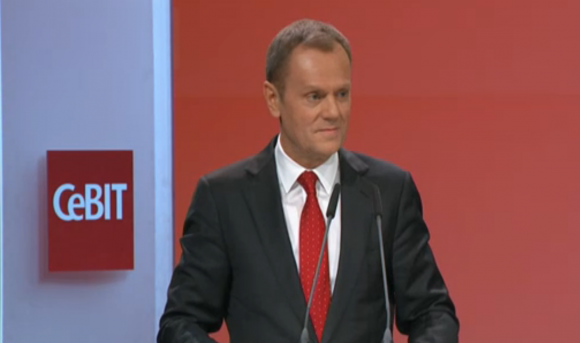 He spoke about 20,000 IT and Telecommunications students graduating in Poland every year, of their potential and how both Germany and Poland will have the most IT specialists being produced than anywhere else in Europe. Of replacements for silicon for processors, Polish video game development, and the value of Polish innovators in these lowered economic times. And he made it clear that “We have to continue towards a knowledge-based economy.” Tusk spoke: “We have to spend more on training, education, science, and research.” Simple and clear.

Stay tuned to SlashGear for CeBIT 2013 coverage from start to finish. Hear of anything popping up at CeBIT you’d like to see with SlashGear’s eyes? Let us know! We’ll be ushering in the hands-on and up to the minute news action for the next set of days – straight from Hannover!