To get Ditto in Pokemon GO in the summer of 2019 you’ll need to watch a short list of monsters. The list of Pokemon hiding Ditto changes every once in a while, so it’s important to have the latest list of Ditto Pokemon available at any given moment. At this very moment, the list of Ditto Pokemon is significantly different from what it was when we first went Ditto hunting – quite different indeed!

Many features in Pokemon GO change with each new wave of monsters. Each time a new region is introduced to the game’s virtual universe, certain elements within that universe change by default. Ditto does not change by default, but by the will of the hand of the master, Niantic.

To find Ditto, one must seek out and capture Pokemon from a list of non-Ditto Pokemon. These Pokemon appear normal when the average gamer sees them in Pokemon GO. They do not look any different from any other Pokemon with their same name. It’s only after they’ve been successfully captured that they transform “back” into Ditto.

NOTE: Each of these current-gen Ditto Pokemon are shown in the image above. They are best friends with one another and with Team Rocket!

The Field Research called “Make an Excellent Throw” was introduced during the Let’s Go Celebration 2018. This Field Research included a Pokemon encounter with a Pidget that, if the user chose to catch, transformed into a Ditto. This Ditto had a maximum capture CP of 356.

Detective Pikachu Celebration Field Research included a Zubat encounter that turned into a Ditto upon capture.

The very first version of Ditto in the game appeared with the following disguises. Note that these disguises do not appear to reveal Ditto at this point in the game in the summer of 2019. 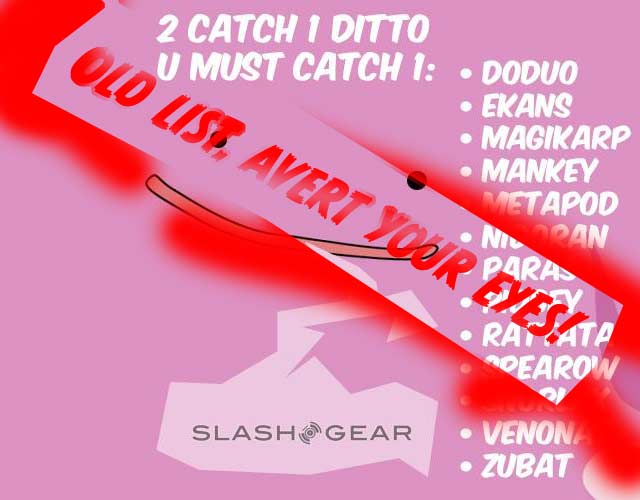 UPDATE: At one point, just after the release of its parent region of Pokemon’s first release, Zigzagoon had been know to transform into Ditto. That is also no longer true. OR at least there’ve been no reports as such for a long while.

Ditto is a fun Pokemon – he’s anything. He can be anything, he can pretend to appear to be anything. He’s got the ability to run any Pokemon’s powers and closely replicate their aesthetic exterior. The only thing Ditto cannot do is replicate another Pokemon’s HP. As such, Ditto is what’s commonly referred to in this game as a Glass Cannon.

A Glass Cannon can be great. Another Pokemon that’s always been classified a Glass Cannon is Gengar. This ghost-type Pokemon never really had a lot of defense or HP with which to keep itself alive for long, but in attack mode, it packs a WOLLOP!

Ditto can be described in a similar way, save its ability to grow more helpful to a user due to its inability to keep a shape for longer than one Pokemon battle. You can’t just transform into a Mewtwo then stay a Mewtwo forever. It’s all very temporary.

So what’s Ditto best at in Pokemon GO? Filling a spot in your Pokedex and potentially fulfilling a requirement in your Pokemon Research. Also he’s a real cute blob!