Canon have announced a pair of high-definition camcorders that look likely to make serious videographers (i.e. not me) weep, like little children, with joy.  The XH A1S and XH G1S both record to HDV tape, have 20x lenses with manual zoom and focus, and use Canon’s optical image stabilizer system. Each can record full 1080p high-definition footage.

Used with the Canon FS-CV DTE Recorder, the two camcorders can bypass the HDV tape system and record direct to an attached hard-drive. The Canon XH A1S and Canon XH G1S HD camcorders will be available in late December with an MRSP of $3,999 and $6,999 respectively. 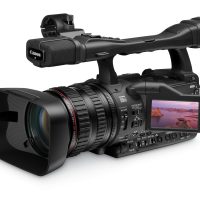 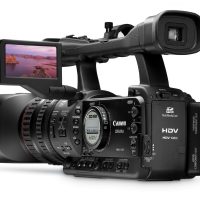 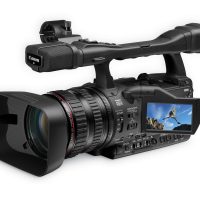 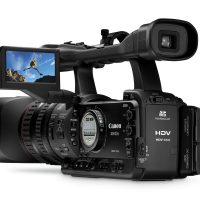 To improve lens operability, the new Canon XH A1S and XH G1S HD camcorders are equipped with a function to customize the “operational feeling” of the camcorder. Acceleration and deceleration have been added to the zoom when starting and stopping in the zoom key mode to achieve a more natural zoom sensation during filming.

User-Definable Operation
The new camcorders provide users with an unprecedented range of image/color settings, camera-control functions, and viewfinder display choices. Video can be captured and output in multiple frame rates to meet the demands of diverse production assignments. These frame rates include: 60i for mainstream production; 30F for perfect frame grabs or Web delivery; and 24F for emulating the look of motion-picture film. Canon’s Factory Service Center can also provide an optional upgrade to add 50i and 25F frame rates. The camcorders can be switched in all frame rates between 1080-line 16:9 aspect ratio HD video and 480-line 4:3 aspect ratio SD video (or 576 lines in 50i or 25F mode).

Both models provide Total Image Control for customizing image and color settings, with a total of 23 custom presets available for image quality adjustment, with the range of image color presets extended from +/-9 to +/-50 steps for fine-tuning the picture (an important feature for achieving the visual subtleties favored by cinematographers). Custom image preset files can be stored to an onboard SD/SDHC Memory Card and shared with other Canon professional models including the XL H1S, XL H1A, XH G1, and XH A1 camcorders for seamless multi-camera production work.

Custom camera functions and operation settings total 21 items and 33 sub-items for achieving creative “looks” for footage. Among these functions are: “shockless” white balance for smooth, color-accurate dissolves between two pre-set white balance values (adjustable from 2000K to 15000K); the ability to increase gain in 0.5dB increments from 0dB up to +18dB, and 3dB and +36dB settings. A selective noise-reduction function is available for reducing the noise in targeted color areas, which is important for blue/green chroma-key applications in special effects work.

Using the custom display settings feature, a camera operator can tailor the display to match their shooting style. These include 22 items and 40 sub-items for selection of status information that can be shown in the camcorders’ 2.8″ widescreen LCD or color EVF.

Improved Audio Specifications
User-requested refinements in the Canon XH A1S and XH G1S HD camcorders’ audio capabilities include: two-channel audio performance; two built-in XLR terminals with separate audio-input sensitivity settings; the ability to simultaneously record sound from the supplied internal microphone and an external microphone; line output level switching; an audio (manual) limiter and a new metal headphone jack for reliable connectivity. The result is better overall flexibility and control of the camera by enabling the use of one cameraman to do the job of many.

Users can easily facilitate multi-camera shoots with the Canon XH G1S model due to the camcorder’s Genlock synchronization input. This feature permits trouble-free switching of the camcorders in a multi-camera situation. With its SMPTE time code input/output terminal, each camera on a shoot can have matched time code.

The Canon Difference
Since it is critical to achieve very sharp focus when shooting in high definition, the XH A1S and XH G1S models feature Canon’s revolutionary Instant AF focusing system, which uses an external sensor, in combination with Canon’s autofocus system, to significantly decrease the time it takes to find focus, even in low-light conditions, reducing focus “hunting.”

The new Canon XH A1S and XH G1S HD camcorders are scheduled to be available in late December for an estimated retail price of $3,999 and $6,999, respectively.