Canon has a lot of stuff on display here at CES 2013, but it’s introducing one new camera that’s small in size but packs quite a few features. It goes by the name of the PowerShot N, and like the recently released Samsung Galaxy Camera, one of the biggest features of this camera is Internet connectivity. With the PowerShot N, you can not only connect to your social network and upload the photos you take with your camera, but you can also connect to other devices to view photos on those.

Of course, those connectivity features might just pale in comparison to the touchscreen that stretches across the entire rear of the device. With this touchscreen, you can add captions to your photos from right there on the camera, and the screen even flips up to create something of a stand for the device. If you’d like, you can view the photos you’ve taken with the camera on your tablet or smartphone, and then use your mobile device to switch the camera off after you’re done viewing your images (though sadly you can use a mobile device to turn the camera on).

The PowerShot N has been officially dubbed a “creative” camera, which will suggest five different creative changes you can make to a photo. These could be anything from cropping to filters like black and white – officially, Canon is saying that the camera uses “intelligent screen analysis” to make these suggestions. Of course, the PowerShot N will also keep your original image, so if you’re not a fan of the suggestions the camera makes, your original will still be intact. 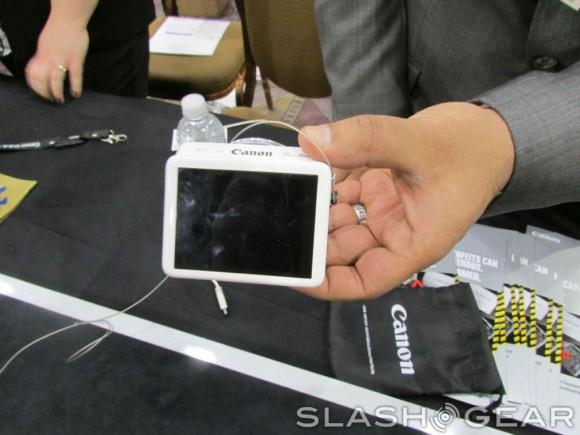 That’s a healthy amount of features for this little 12-megapixel shooter, but this still has plenty of the features you’d expect. These include low-light performance, ISO up to 6400, and the ability to capture video in 1080p. Canon says the PowerShot N will begin shipping in April 2013 and will come with a price tag of $300, which doesn’t seem too bad. We’ll hopefully be getting a closer look at the PowerShot N around then, but in the meantime, check out our CES portal for all of the news you crave from the show!