Coffee is a serious matter, and a lot of what you get in the cup is about timing. Breville’s Grind Control brewer may not have the steaming bells and whistles of an espresso machine, but it proves that drip coffee needn’t be dull – or anything other than delicious. It’s also the first full-sized brewer I’ve seen that’s just as happy preparing coffee for one cup as it is for twelve.

It’s not a retiring piece of kitchen equipment, though. I like the eye-catching brushed silver metal finish, though others I asked said it reminded them of something you’d find in an airplane’s galley. 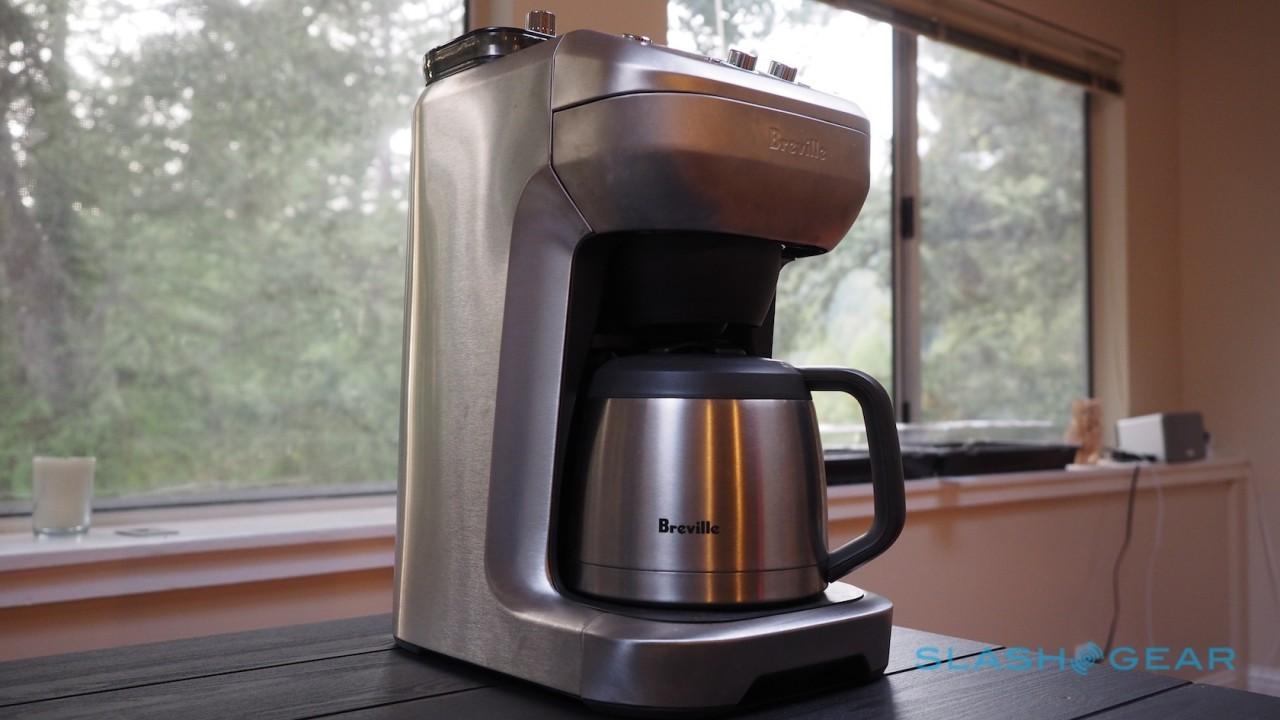 The bulk is to accommodate not only the brewing apparatus but the grinder, too. It’s a burr grinder, so the coffee beans are crushed in the tiny, adjustable gap between rotating burrs, which leads to more consistently sized pieces and thus more even brewing compared to a cheaper whirly-blade grinder that produces a wide variety of dust, shards, and chunks.

The beans go into a removable hopper on the top, with a closely-fitting cover to help keep air out, and a dial to adjust the grind size across six settings. A locking wheel closes off the feed chute so you can remove the hopper while it still has beans inside, which is useful – it’ll hold around a half-pound in all – though you always leave a small spoonful of them still in the grinder’s throat.

If you just want to try a different coffee type periodically, you can bypass the grinder and load already-ground coffee into the brew chamber. 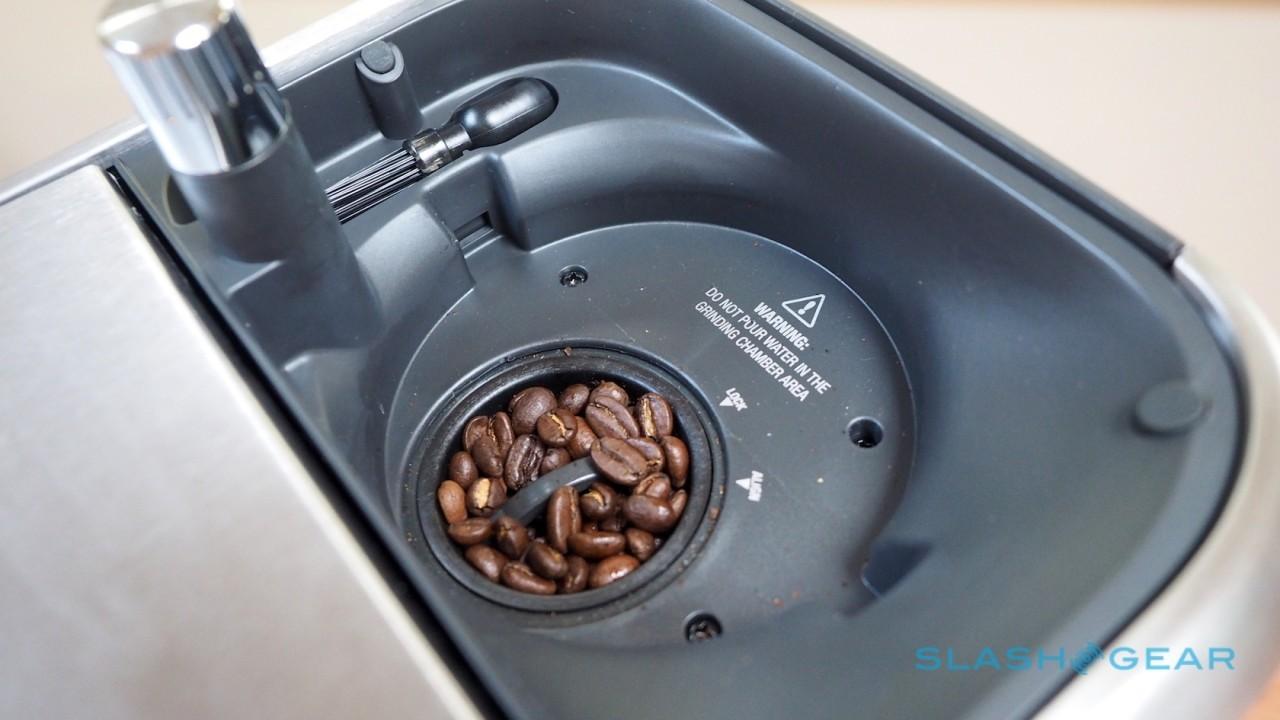 It’s the grinder which makes the programmability of the Grind Control worthwhile, in my opinion. While timer-based coffee brewers certainly aren’t new, they almost always require loading with pre-ground coffee when you set the timer.

If that’s in the evening, envisioning a fresh cup when you wake up the following morning, you’re basically brewing with stale coffee. The aromatic oils dry up within minutes after grinding: you certainly lose the nuances of taste overnight. That’s why baristas insist on grinding for espresso just before they pull a shot, and if you’re serious about enjoying your brewed coffee then you should be doing the same. (It’s also why you should never buy pre-ground coffee from the store, even if it’s vacuum sealed). 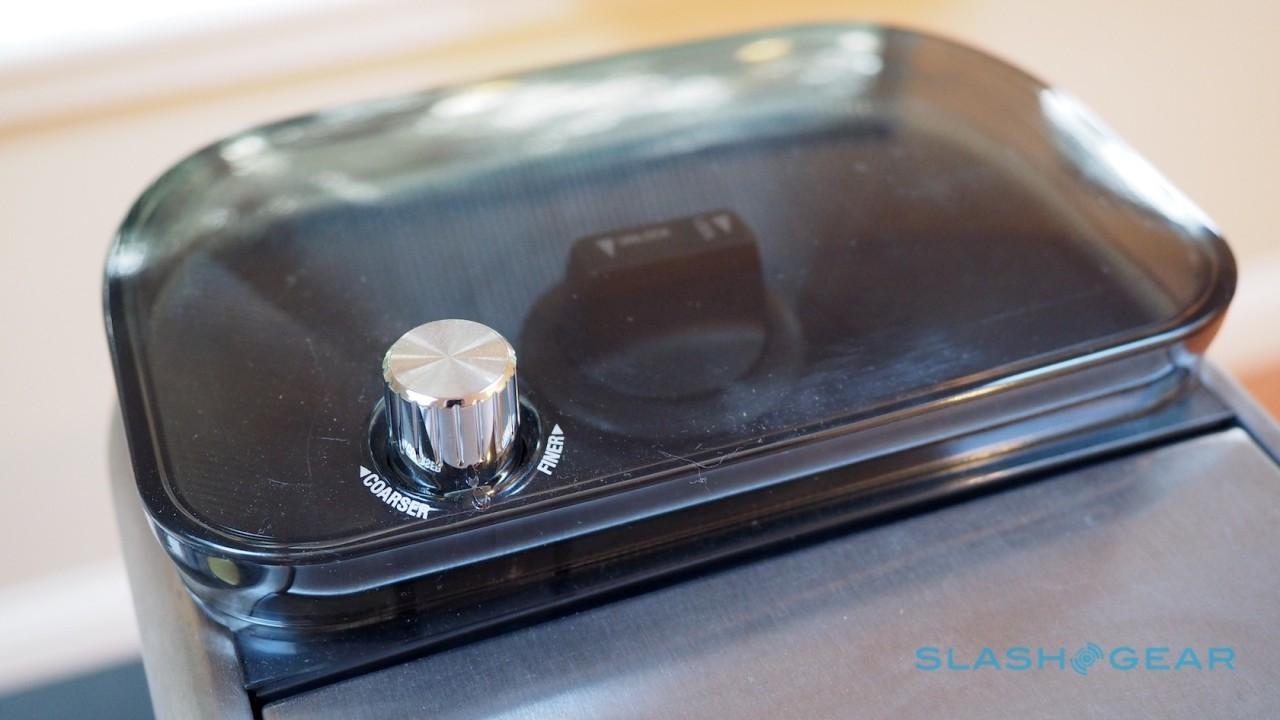 Breville’s other unusual feature is its closed brew chamber. It’s a pod, roughly the size of two fists held together, with a hinged lid; it can be used either with the reusable goldtone filter basket Breville provides, rinsed out each time, or – my preference for flavor and convenience – with flat-bottomed paper filters that you can drop right into the compost when you’re done.

The goal is to keep air out and aromatics in while the brew process takes place, not to mention reduce the amount of heat that dissipates. 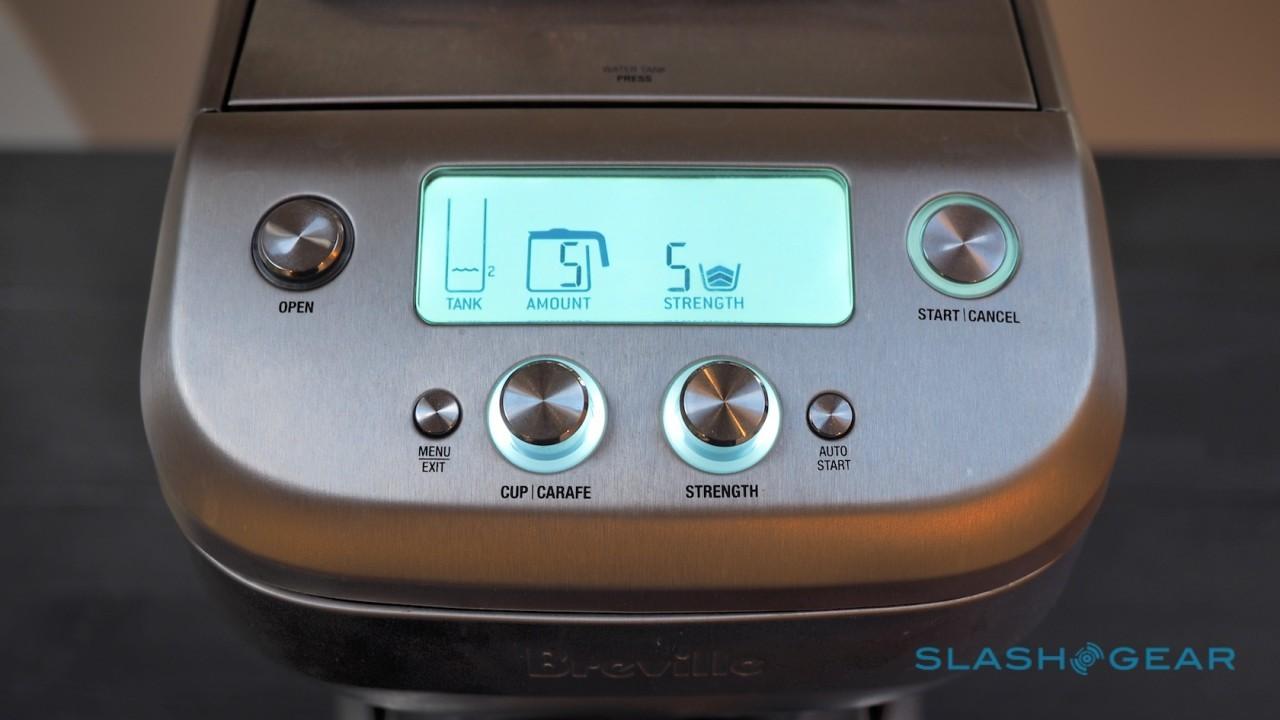 Since I’m generally not feeling entirely myself in the morning – that’s one of the reasons I need the coffee, after all – the Breville’s controls are thankfully straightforward. The buttons and knobs are large and illuminated, and there aren’t many of them to get confused.

Most often you’ll be dealing with brew amount and strength; each gets a knob that can also be pressed as a button. That flips them between pot or mug brewing, and between integrated grinder or pre-ground coffee, respectively. Smaller buttons flanking them set the clock and control the optional timer; once the brew cycle has finished, the display is locked to “change filter” so that you don’t accidentally try to make another pot with the same, full filter. 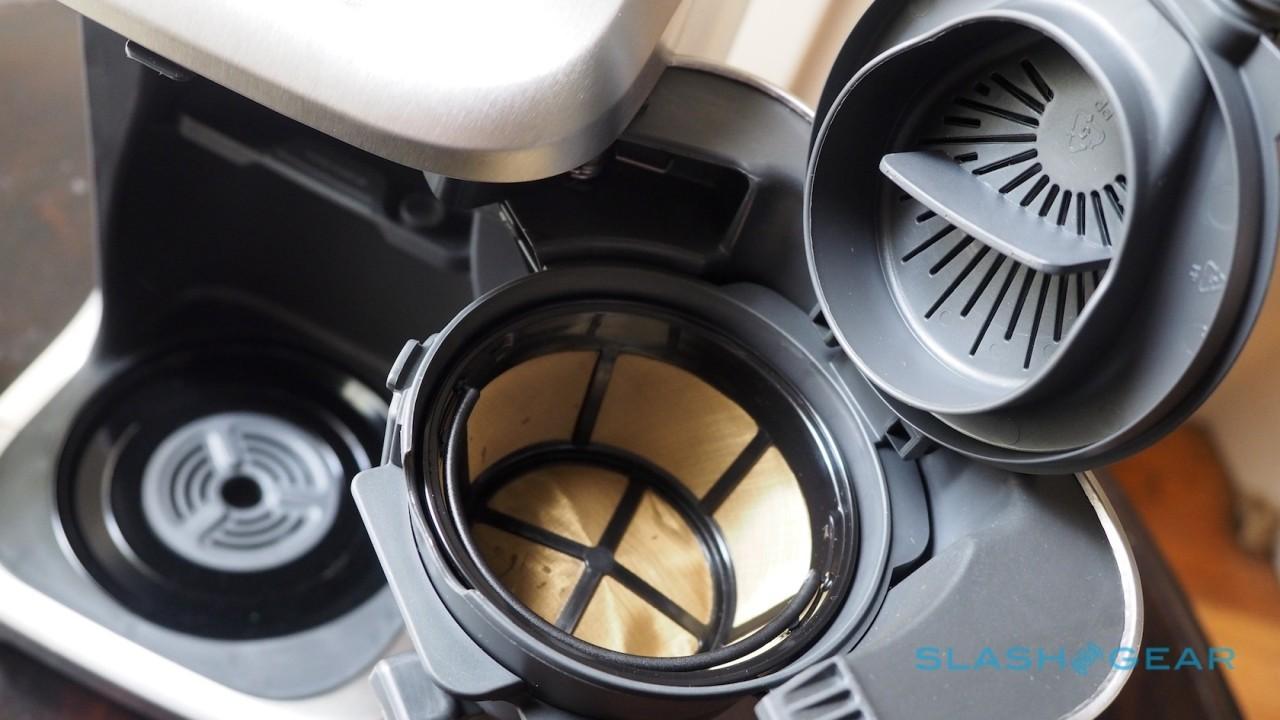 A mechanized valve on the bottom also allows the Grind Control to work with either the included 12-cup double-walled carafe – which can be a little frustrating to pour from cleanly thanks to the design of its lid and spout – if you’re brewing several cups-worth, or into a single mug or travel thermos, between 8 oz and 20 oz in size.

That flexibility has really changed how I prepare and drink coffee. Previously, I would’ve either made a whole pot – which would cool and go stale as the day progressed – or use a simple plastic pour-over cone to make one cup at a time, which could be time-consuming. 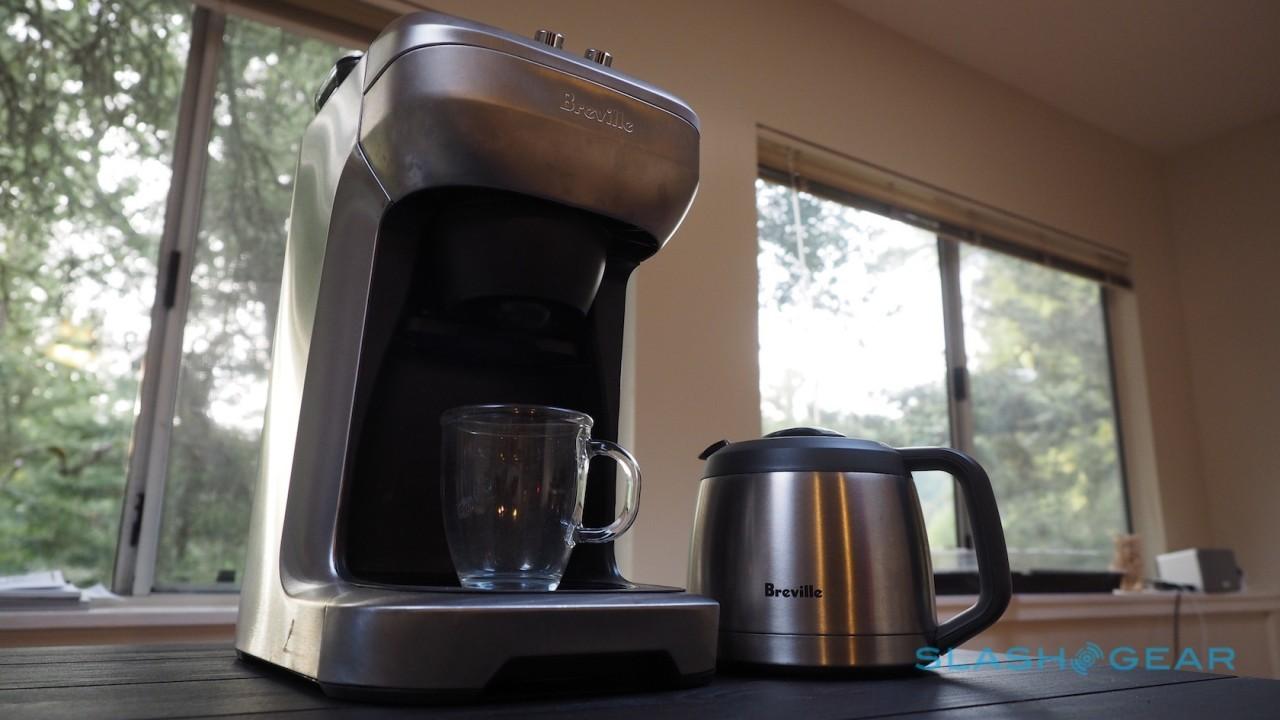 With the Breville, I could prepare a pot of coffee if I had company, but otherwise use the machine as a single-cup brewer, almost as though it ran on pods but with the knowledge that the coffee was actually fresh. With paper filters, clean-up was a matter of dumping out the old filter, giving the brew chamber a rinse, and then slotting a new filter into place ready for the next cup.

Breville claims to heat the water in the brewing chamber to 200 degrees Fahrenheit, as per SCAA (Speciality Coffee Association of America) standards. You’d be surprised how many drip coffee machines don’t; unfortunately because of the sealed chamber I couldn’t jab my instant-read thermometer probe in there to check. 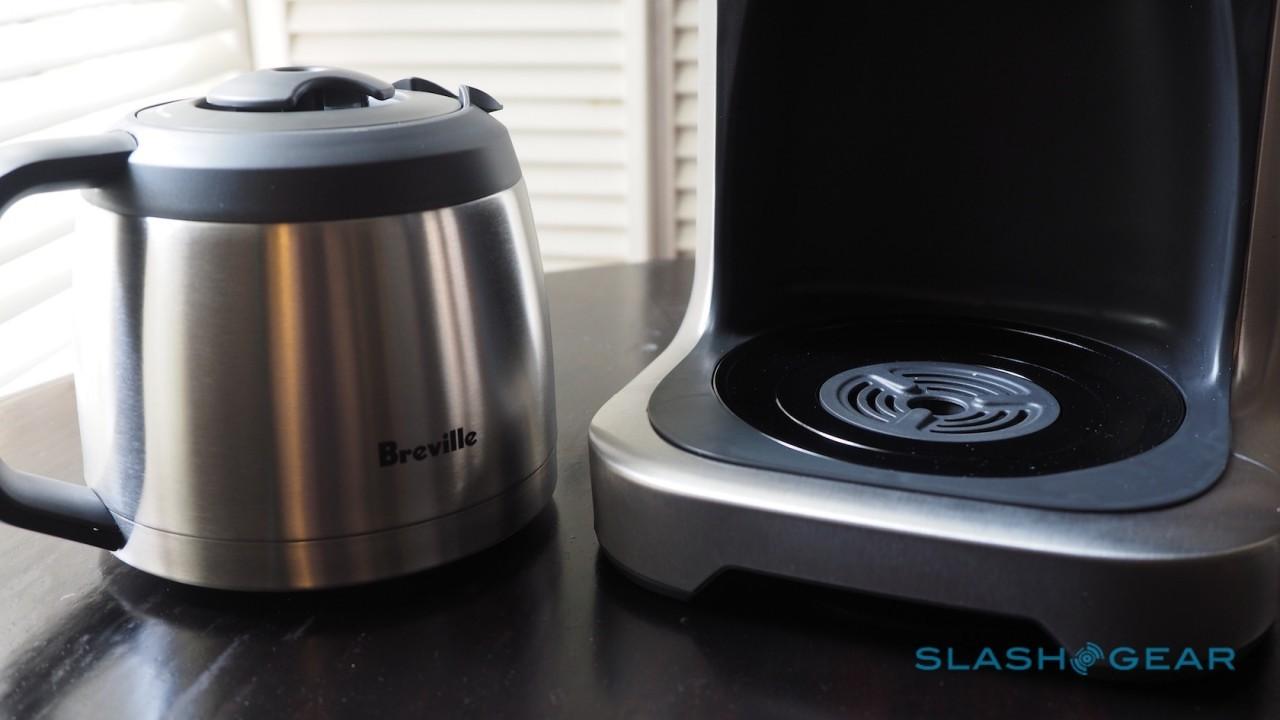 I could, however, test temperature in the carafe. After preheating it with hot water from the faucet, I brewed a 10-cup cycle and – when the Breville beeped to let me know it was complete, even though I could’ve poured some out partway through – then measured the temperature.

Right after brewing, the coffee measured 175 Fahrenheit. I poured off approximately two cups’ worth and then tested again after 90 minutes, at which point the temperature had dropped to 158 F. Finally, after 3.5 hours, it had fallen to 139 F; on the lukewarm side when I added cream, but still drinkable. 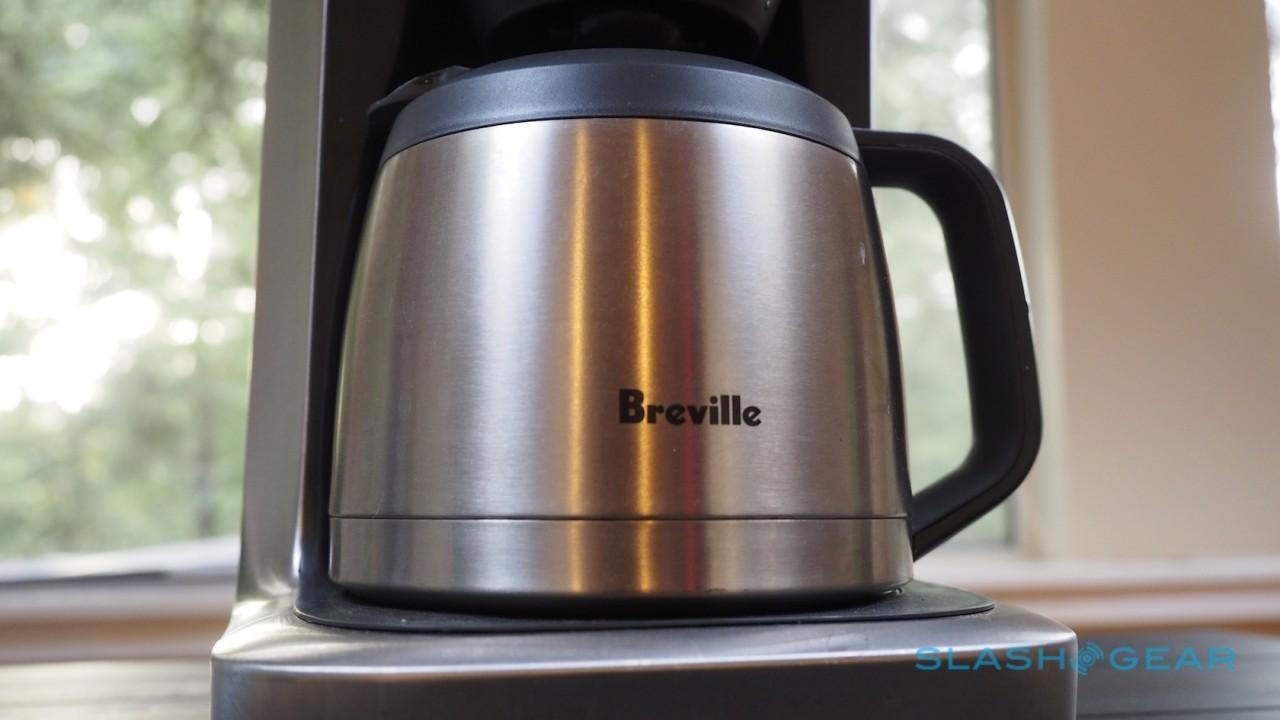 In some ways, I’d like to see Breville go further with the Grind Control’s smarts. Though programmable start times are useful, they’re also restricted in flexibility: if you get up earlier than expected, you have to trigger the brew manually, while if you get up late the coffee won’t be so fresh.

Some sort of WiFi connectivity, allowing for remote control and – preferably – integration with third-party platforms like SmartThings would really take the brewer to the next level. 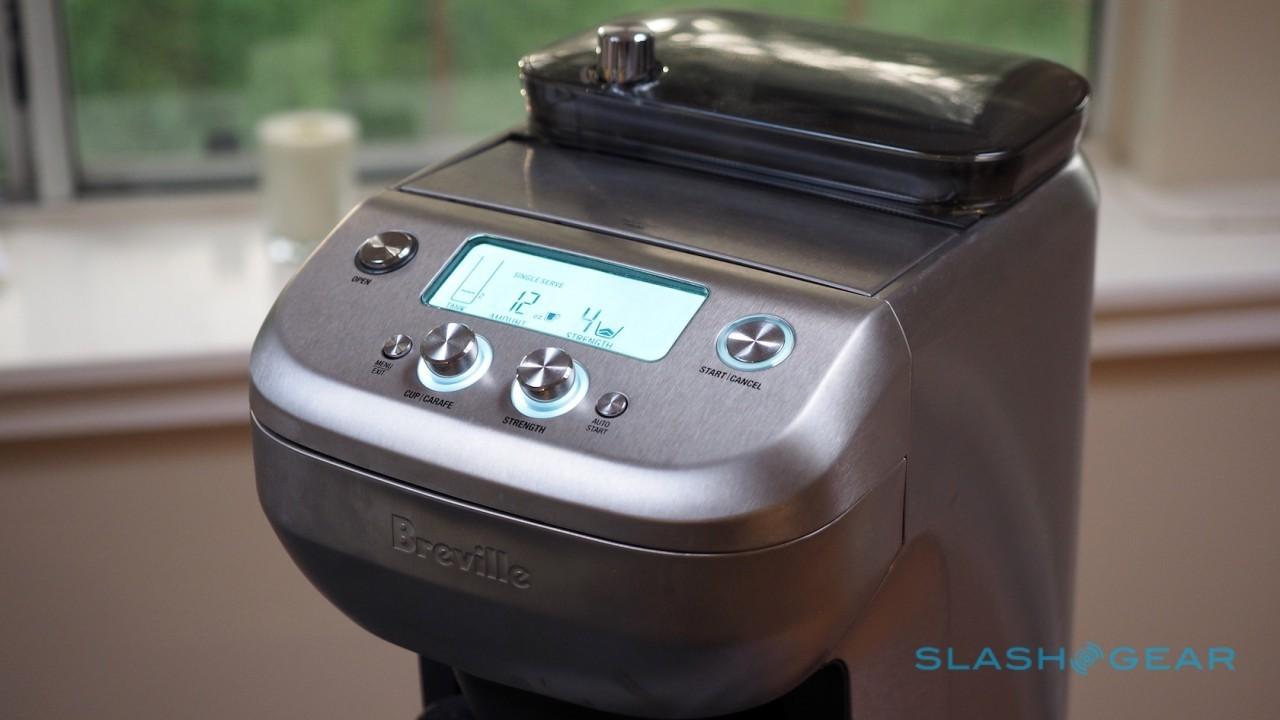 All the same, the audience for that is probably fairly small, and it would add to the Grind Control’s already not-inconsiderable price tag of $300. With cheap brewers available for a fraction of that, you need to really put a premium on your coffee to consider the Breville worthwhile. Personally, the convenience of single-cup or pot brewing, not to mention the reassurance of the grind-on-demand system and the ease of clean-up, would be sufficient to earn the Grind Control a spot on my countertop.