Now that the Boxee Box by D-Link is officially official, and the NVIDIA Tegra 2 chipset is the same, Boxee can finally confirm that yes, they’ve used the low-power 1080p-capable Tegra T20 chip in their upcoming media streamer.  According to a new post on the Boxee blog, the dual-core ARM Cortex A9 CPU means the Boxee Box is capable of Adobe Flash 10.1 decoding, HD streaming and local 1080p playback.

They’ve also confirmed a few more details about internal components, including the fact that the networked mediaplayer will have a Broadcom 802.11n wireless chip.  The remote control – which we saw for the first time earlier in the week, and which has a QWERTY thumb-board on its flip side – will communicate using a Nordic RF chip.  However there won’t be a hard-drive – to keep costs down – or hardware IR support, though you’ll be able to plug in a USB IR dongle since the Boxee software will still support it.

Meanwhile, the new Boxee Beta is now available for public download, for Mac, Windows and Ubuntu.  It features guide content from TV.com along with a new app for blip.tv and more.  More details on the Beta here. 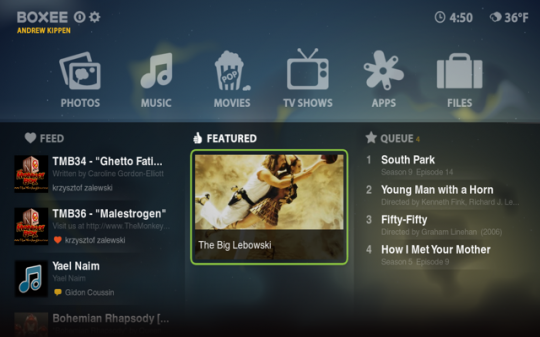