The car world may be going all-wheel drive, but BMW still has rear-wheel drive ambitions: welcome, then, the BMW Concept Z4. Previewing, as the name suggests, the third-generation Z4 that will replace the seven year old second-gen car, the droptop two-seater is being shown off for the first time at the Pebble Beach Concours d’Elegance 2017 this week. It’s a chance to bring the sporty convertible bang up to date with BMW‘s current design language.

The familial resemblance with the second-generation Z4 is clear. Like that car, it has a long hood and short trunk, pushing the cabin back and extending out the wheelbase. This time around, though, BMW has truncated the overhangs and trimmed the hood length, which it says puts the driver closer to the center of the Z4 Concept. 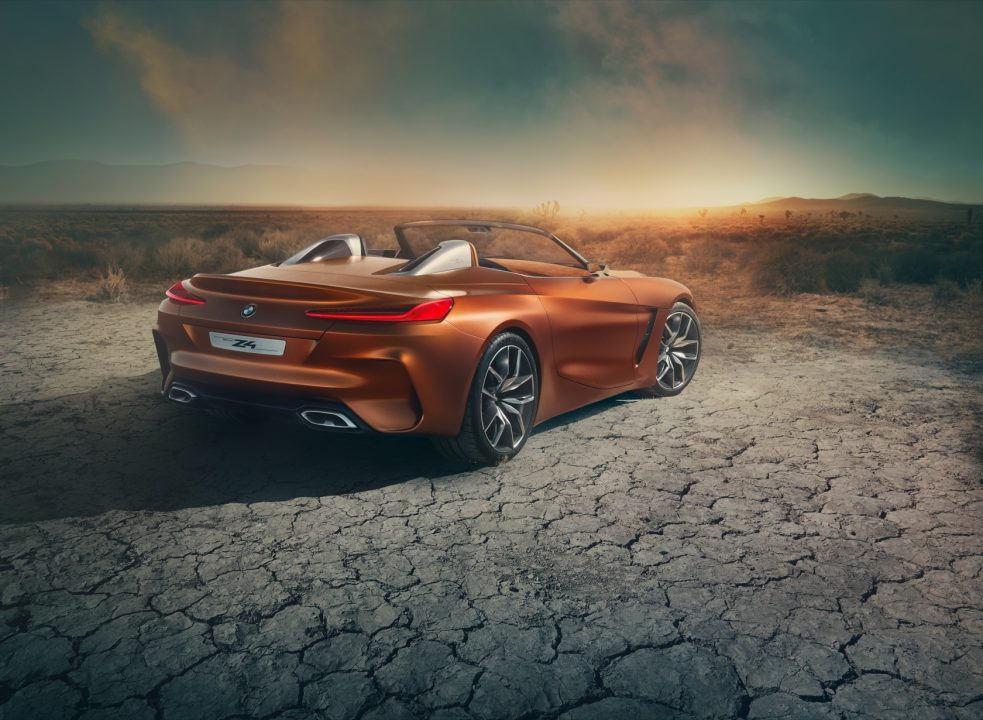 Up front, the shark nose fascia is even more aggressive, with the oversized kidney grille lower and broader than before. BMW says it wanted to trigger associations with the Z8 and give the Z4 Concept “a certain flamboyance.” It’s not the only heritage touch, mind: the mesh that fills those kidneys is a nod to the BMW 328 Mille Miglia classic.

Unusually, the headlamps have been spun 90-degrees and stack two overlapping tubes on each size. The turn signals have been integrated, pointing into the grilles diagonally, while their shape and angles are echoed in the gill-vents on the clamshell hood. Bigger front apron vents and a sizable carbon-fiber insert borrow from BMW’s motorsports division. 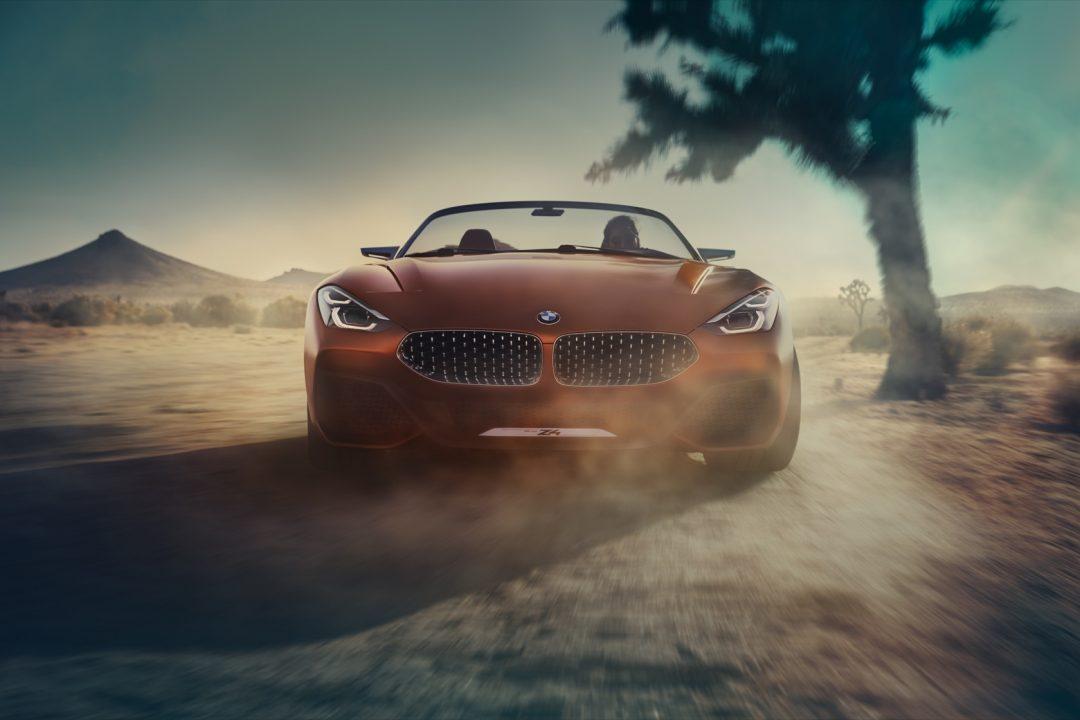 At the back, meanwhile, the twin domes that stretch back from the headrests help hide the rollover bars. Wide hips over flared wheel arches are offset by slim, L-shaped rear lamps. A wider-than-normal spoiler helps emphasize the overall width of the car, while the carbon-fiber diffuser picks up the motorsports theme from the front. BMW says the goal was to emphasize the car’s rear-wheel drive nature, while the lowered door sills help to underscore how close to the road the Z4 Concept is.

Inside, meanwhile, the Energetic Orange exterior paint continues, along with chrome and leather. BMW opted to make the driver’s seat, plus the door trim, instrument panel, and center stack all black, making a visual cocoon that wraps around the driver. Twin displays are mounted – one behind the wheel, one atop the center stack – at almost the exact same height, with the ability to move graphics between the two as if they were a single ribbon of screen. 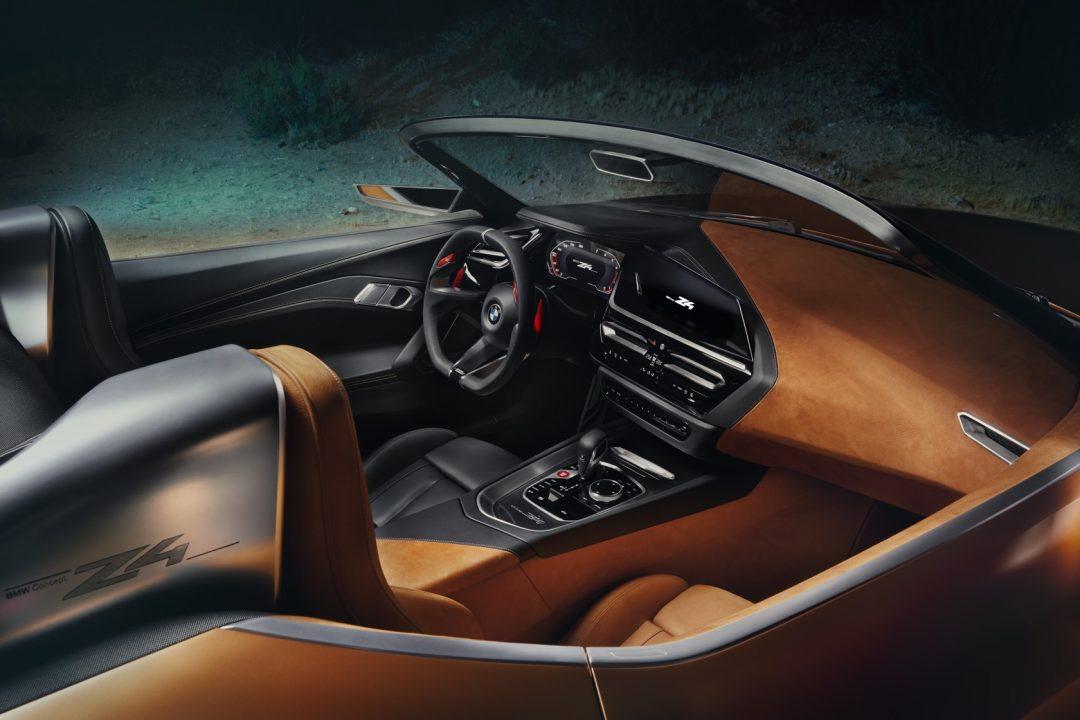 A head-up display projects key data right into the driver’s eyeline, Controls are grouped into what BMW is calling “function islands” that can be easily identified and reduce distraction. Laser-cut motifs bring a hexagonal pattern into the cabin, while there’s carbon-fiber on the door sills. 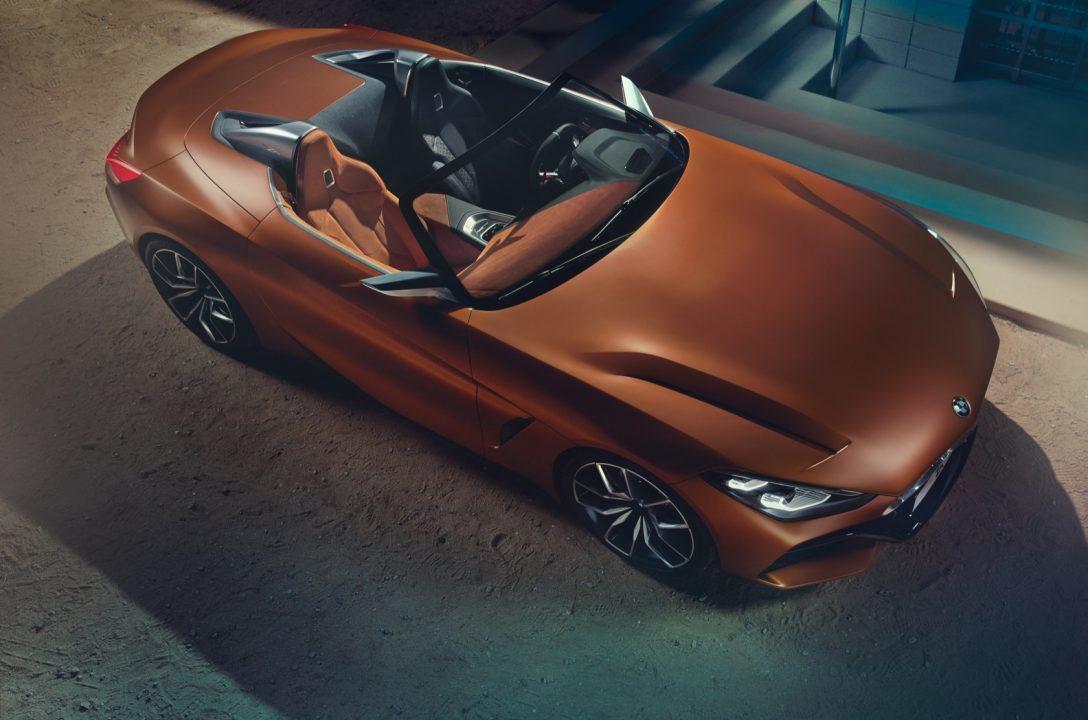 “The BMW Concept Z4 in an all-out driving machine,” Adrian van Hooydonk, Senior Vice President of BMW Group Design, said of the car. “Stripping the car back to the bare essentials allows the driver to experience all the ingredients of motoring pleasure with supreme directness. This is total freedom on four wheels.”

That freedom will see a few changes, most likely, before it’s available for sale. BMW says it’s a “look ahead” to the production Z4, that will be unveiled officially next year. Expect the same sort of overall styling and proportions, but a more straightforward cabin, at the very least.