What’s in a phone? If it’s the BlackBerry Z10, then it’s plenty of Qualcomm gadgets and a surprising mixture of components already seen used in Samsung’s Galaxy S III, with a new teardown of the BlackBerry 10 smartphone suggesting the Canadian firm may well have cribbed some design inspiration from South Korea. UBM TechInsights whipped off the Z10’s covers and dug around the parts bin raiding inside, with Qualcomm apparently ousting one-time BlackBerry best-buddy Texas Instruments for the most part.

Where TI was previously a mainstay for processors and chips in BlackBerry phones, the Z10 instead looks to Qualcomm for its 1.5GHz dualcore processor, 3G/LTE modem, GPU, power management chip, GPS, and more. TI is relegated to providing the WiFi/Bluetooth/FM combo chip, while Samsung donates the flash memory and RAM. 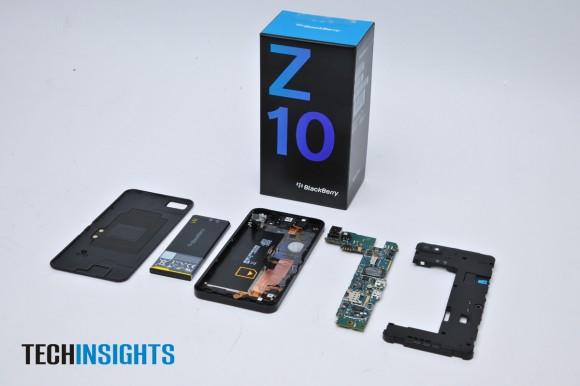 Perhaps more interesting than the origin of the components is the decision process BlackBerry (nee RIM) seemingly made in how they were combined, something which is supposedly strongly reminiscent of Samsung’s assembly strategy with the Galaxy series. Various parts – from the processor that’s also in the LTE Galaxy S III, to the new WCD9310 audio codec in the same phone – seem to indicate that BlackBerry certainly knows who its key rivals are.

“It’s not certain if these decisions the designers made on what semiconductors, ICs and other modules to use were by design or by accident” UBM concludes, “but based on the relative success of the Samsung Galaxy S3, it isn’t a bad model to draw from.”

If you’re more interested in how the BlackBerry Z10 – and BlackBerry 10 as a platform – performs when the phone is in one piece, check out our full review.