The BlackBerry Tour 9630 has made an appearance in Verizon’s internal inventory systems, although according to the tipster the smartphones themselves are not yet in stock.  Expected to go on sale as of July 13th, the BlackBerry Tour is believed to sit underneath the BlackBerry Bold in terms of range position, with a price tag of $199 with a two-year contract

As for specifications, RIM are yet to make anything official but the Tour 9630 is believed to be a cross between their Curve and Bold handsets.  It will have EVDO Rev.A connectivity, together with quadband GSM for global roaming, a 480 x 320 display and a 3.2-megapixel camera with video recording capabilities.

Other specifications include GPS and a microSD card slot to augment the 1GB of internal storage.  Dimensions are believed to be 4.46 x 2.48 x 0.55 inches, and there’s both USB and Bluetooth connectivity.  No word on whether Verizon will allow the Tour to have WiFi or not; we’re expecting it to be absent. 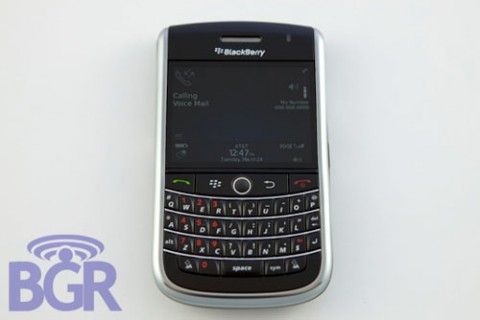