RIM’s native SDK for the BlackBerry PlayBook – demonstrated at BlackBerry World 2011 earlier this week – isn’t expected until sometime this summer, but one developer has already figured out a way to bypass the existing Adobe AIR environment and get QNX native code running on the 7-inch tablet. Adam Bell discovered that, with a little tweaking, it’s possible to copy QNX apps coded on the QNX desktop environment, aka the Neutrino SDP (software development platform), over to the PlayBook and have them run as native code.

That’s because the QNX desktop environment already comes with a cross-compiler that allows developers to create native apps for ARM processors, like the TI chip the PlayBook is based on. Software can be written in regular C/C++ and then compiled and copied across to the tablet. 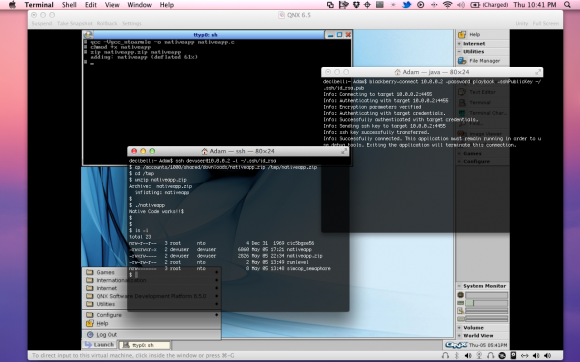 That last step did take a little legwork, since if you merely shuttle the code over to the PlayBook’s “downloads” folder, using SSH into the device as “devuser”, it lacks the necessary permissions to actually run. Instead, Bell found that if you set the binary as executable, and then zip it up, you can move it from the “downloads” folder, unzip it, and run it as a native PlayBook app.

The workaround means that, rather than use AIR to develop apps as RIM is currently insisting on, developers can now create titles with full access to everything RIM’s own software on the PlayBook can use. Whether the company will approve of that remains to be seen, but it’s certainly another benefit of the flexibility of the QNX platform the tablet is based on.