With the arguments over the BlackBerry Storm (review part 1 & 2)still raging, it’s going to take a solid, dependable smartphone from RIM to settle some users down.  The BlackBerry Curve 8900 on T-Mobile might just be that device: a more traditional full-QWERTY form-factor than some of RIM’s recent diversions, SlashGear has been spending some time with a pre-release 8900 and have some first-impressions in advance of our full review.

As looks go, the 8900 doesn’t break any new ground for RIM.  Happily, the Curve family has always been blessed with handsome looks and sturdy build, and this latest device is no different.  Solid and tough, it’s also surprisingly light and compact, nestling well in the hand.  The display is amazingly crisp, an area which RIM have been excelling in recently with both the Bold and the Storm, and the latest BlackBerry OS 4.61.114 does its usual job of making the majority of functions available from the first level of menus.  The keyboard, while not as aesthetically pleasing as that of the Bold, is responsive and highly usable, with just the right amount of key spacing (in fact some of us prefer it over the Bold) and clickiness.

As with the Bold, the web browser is a huge step forward for a BlackBerry.  While it’s not up to the standard of mobile Safari on the iPhone, nor in fact some third-party offerings such as Opera’s browsers, it’s nonetheless capable of showing full desktop webpages and, thanks to the trackball, navigating and zooming through them easily.  Here the 480 x 360 display really comes into its own. 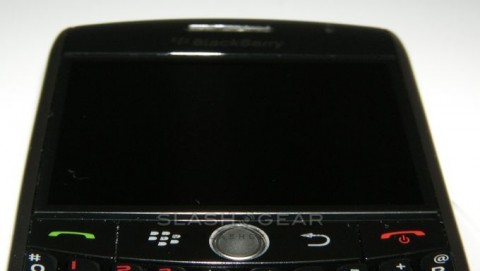 For that reason, the absence of 3G is all the more frustrating.  We’re not sure exactly why, but RIM have given the Curve 8900 WiFi b/g and, at most, EDGE data capabilities.  In a suitable hotspot the 8900 is as speedy as you need, which makes it incredibly noticeable when you slip out of range and fall into 2.5G coverage.

We’re also not entirely convinced with this BlackBerry’s UMA call quality.  Several times during test calls we’ve had people tell us that we sound odd, or that they can hear digital artifacts.  It’s a strange inconsistency, as at other times the 8900 manage good to very good quality.  We’ll be testing this out much more over the coming days, to see whether it’s a network issue or something implicit to the smartphone itself. 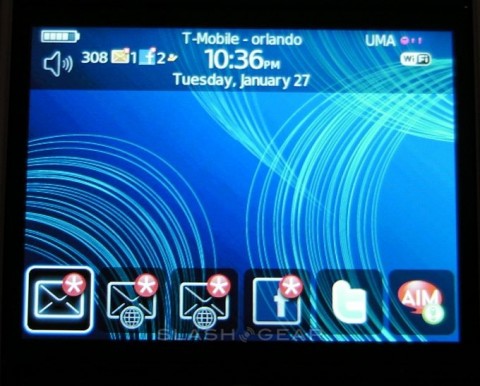 The camera is a 3.2-megapixel unit with auto-focus and image stabilization, together with a flash and 2x digital zoom.  It’s capable of still images and recording video, with the latter maxing out at 480 x 352 resolution (though our Curve shipped switched to the lesser 320 x 240 setting).  Image quality is good, though the flash is pretty anemic, and the zoom, while digital, doesn’t involve too much quality loss.  Video, meanwhile, is less impressive, with frequent blocky patches and poor refresh rates. 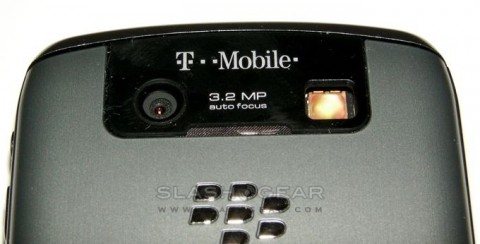 With a 1,400mAh battery, RIM are suggesting 5.5hrs talktime or up to 15 days standby from the Curve 8900.  With WiFi permanently switched on, minimal web surfing but plenty of emailing, UMA calls and instant messaging, we got through the day with two bars remaining.  Frankly, we have no concerns about battery life on the 8900, and are happy it could make it through a hectic workday without complaint. 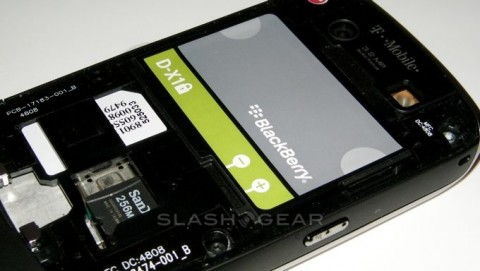 To be frank, which seems to be the audience the BlackBerry Curve 8900 is aiming for: the mobile professional.  Without 3G or superlative media functionality, it’s less likely to appeal to the consumer market; instead, lengthy battery life and a severely bashable keyboard make for a reassuring business partner.

We’ll be putting the BlackBerry Curve 8900 through its paces over the coming days, so expect the full SlashGear review at the end of the week.  It goes on sale in T-Mobile retail stores, at select retailers and online beginning February 11th, priced at $199.99 with a new two-year contract and data plan.