Verizon‘s second smartphone announcement this morning is one for the heavy messengers (no, we’re not talking about fat couriers): the BlackBerry Curve 8530, tipped as dropping this month back in August.  The Curve 8530 has not only EVDO Rev.A but WiFi b/g and GPS, together with a full QWERTY keyboard and 2-megapixel digital camera.

There’s also VZ Navigator, a 3.5mm headphone socket and dedicated media keys, all the usual messaging accounts (including SMS, MMS and IM) and a microSD card slot.  Onboard storage is 256MB and the processor is a 528MHz chip; the traditional BlackBerry trackball has been replaced by a touch-sensitive trackpad.

The BlackBerry Curve 8530 will go on sale from November 20th in black and smoky violet, priced from $99.99 following a $100 mail-in rebate.  That presumes a new, two-year agreement, with data plans kicking off at $29.99 on top of a regular voice plan. 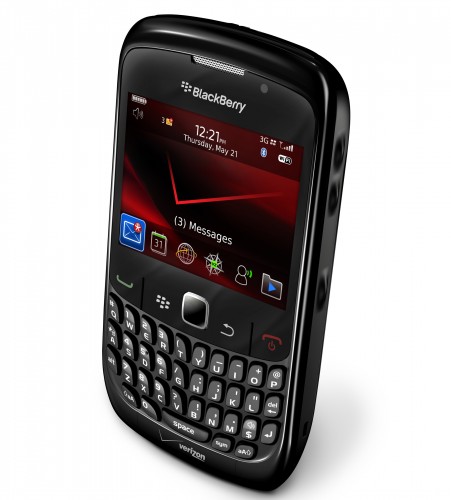 Pricing and Availability
• The BlackBerry Curve 8530 smartphone is expected to be available from Verizon Wireless beginning Nov. 20 for $99.99 after a $100 mail-in rebate with a new two-year customer agreement on a voice plan with an Email and Web feature or an Email and Web for BlackBerry plan. Customers will receive the mail-in rebate in the form of a debit card; upon receipt, customers may use the card as cash anywhere debit cards are accepted. Data plans for the BlackBerry Curve 8530 smartphone begin at $29.99 when added to any Nationwide voice plan.
• For information on all Verizon Wireless products and services, visit a Verizon Wireless Communications Store, call 1-800-2 JOIN IN or go to www.verizonwireless.com.