As we ramp up to the 30th of January and the official launch of RIM’s own BlackBerry 10, we’re seeing multiple leaks and test videos like the one we’ve been shown today, complete with a demonstration of the software’s Voice Control system. This system is built in to BlackBerry 10 and looks rather familiar if you’re used to Siri from iOS or S-Voice from Samsung’s Galaxy series. In this case you’ll be pressing the Start button (aka power button) on your device a 2-count and the Voice Control system will activate.

At the moment we’re able to see several functionalities included in this build, starting with the ability to send an SMS message courtesy of the folks at Telekom Presse. Though the voice recognition here is nothing like we’re seeing with advanced diction-decoding voice systems like Siri, pre-set commands appear to work perfectly well. You’ll also see the system make a phone call and start up a bit of music as it exists on the device itself – perhaps streaming apps in the future, too!

This video also shows off a couple other items that we’ve seen in the past, including the next-level keyboard with its fully functional predictive text engine. The maps application you may have seen in the past is also being shown here in brief. While we’re not sure this is the final version of the software that will be revealed at the end of this month, what we’re seeing thus far does seem to be relatively solid – as a demo, anyway. 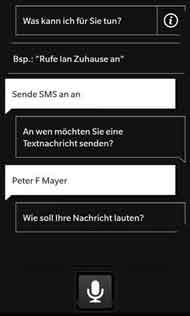 The machine you’re seeing these demos on is the BlackBerry Z10. This is a touch-centric device working with the newest iteration of BlackBerry 10 and will be acting as one of RIM’s 2 or more hero devices at the launch of this new operating system. Have a peek in our BlackBerry 10 tag portal for more and hit the timeline below for the most recent action in the RIM universe!