This week the folks at Hyperbolic Magnetism are probably pretty pumped up about all the press they’re getting for Beat Saber. They first started development for this game back in 2016, and between then and now it’s been tested by hundreds of users. In its first couple weeks on the Steam VR store and Oculus Store, Beat Saber’s become a sort of shock hit.

The developers behind this game came from PC development roots and a mobile uprising. “We are Hyperbolic Magnetism – a small indie game studio run by Ján “Split” Ilavský and Vladimír “Loki” Hrinčár based in Prague, Czech Republic,” said the folks at HM. “We started working together in the late ’90s on PC games, but since the advent of the App Store we quickly changed focus to mobile. Our goal has been always to come up with a unique gameplay and great yet simple visual style.”

The title they’re rolling with now, Beat Saber, is all about jamming to tunes in virtual reality with a pair of laser swords. There’s a word “saber” in the title, but don’t call them lightsabers. This is no Lucasfilm joint.

The game plays a lot like Dance Dance Revolution or Guitar Hero – but instead of tapping arrows, you’re bashing boxes. Users employ a pair of controllers that, in the VR universe, are engaged as a pair of lovely light sticks. The basic music is made by musician Jaroslav Beck, while additional tunes are “modded” in after the fact. 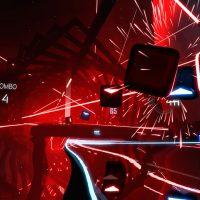 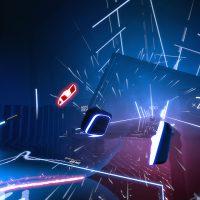 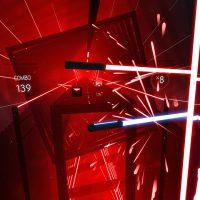 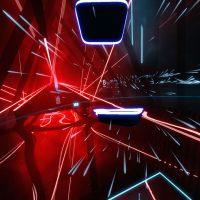 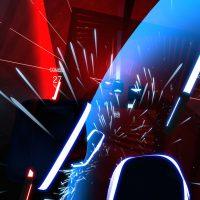 Above you’ll see a number of screenshots captured by the folks behind the game. This game is available in the Oculus store for Oculus Rift right now – and it’s available for HTC VIVE in the Steam app store as well – in the VR section. It’ll run you around $20 if you want to pick it up.

While the standard bit of gameplay utilizes two separate sabers, OBVIOUSLY someone combined the two to make a mod for a Darth Maul dual-bladed lightsaber situation. Have a peek at that mod below, and never-4-get Star Wars Kid.