Last month we saw leaked pictures of the BlackBerry Messenger design for BlackBerry 10 leak out thanks to N4BB, and now the site is back with yet more pictures detailing the user interface and keyboard shortcuts that the app will employ. The site notes that BBM is being overhauled by The Astonishing Tribe, with certain features being hidden from view and pulled up with user gestures to save as much onscreen space as possible.

That will help save precious screen real estate on the N-Series BlackBerry 10 device, which feature a touchscreen and QWERTY keyboard. Performing certain gestures will show and hide user elements such as context menus, while keyboard shortcuts will be employed for training messaging actions. Hitting “C”, for example, will bring up a new chat, while “S” will jump the user straight into search. 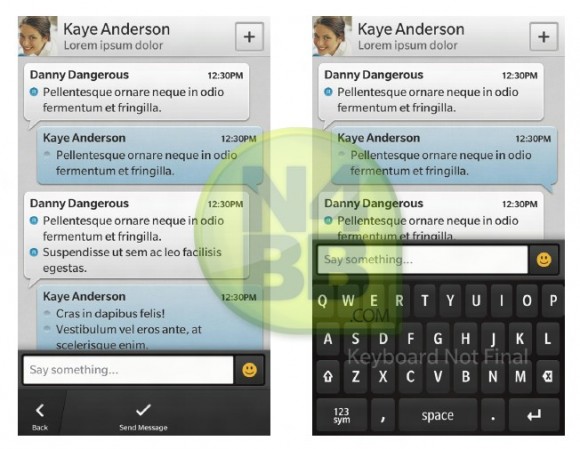 It looks like RIM is still tweaking the design, and as the screenshots suggest the onscreen keyboard for the L-Series device also isn’t finalized. A previous leak indicated that BBM would also feature theme support, allowing users to switch between a light and dark theme. The dark theme would be advantageous for the OLED screens employed on both phones, with pure black elements reducing power draw from the screens, maximizing battery efficiency as a result.