Today it would appear that BlackBerry is actually aiming to release their BBM chat apps for both the iOS and Android ecosystems, and we’ve got our hands on the both of them to show you what they’re all about. At its simplest, it would appear that BBM is coming to the public outside of the BlackBerry smartphone in a form that’s extremely similar to the original. At its most complex, it seems that the software team behind the apps for each new platform have done their homework as far as how the design language should translate.

Somehow or another, BlackBerry seems to have decided on a design language that fits Android and iOS both at once. The differences are minor – and in most cases there are no differences at all. It’s in the Android version that you’ll see a bit more versatility (using Google voice recognition for transcription at all points, for example) while both apps are prepared for smartphones only, here at first. Here you’ll find ease in access for each of the different kinds of chat as well – individuals and groups alike.

Group Chats are split up into Lists, Pictures, Events, and the Chats themselves, allowing a relatively simple way of navigating the whole system. This should provide a relatively easy way for businesses to conduct mini-meetings across platforms in the near future where before they were, of course, limited to BlackBerry devices alone. You’ll find the most recent message appearing in the Chat rectangle in the upper left, lists let loose below, and the most recent picture appearing in the upper right. 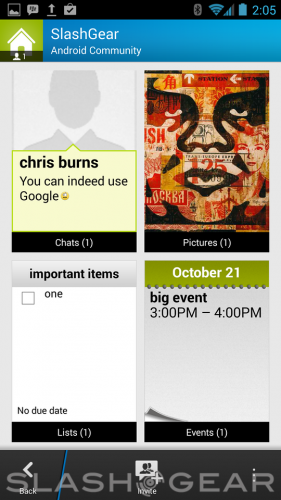 Inviting friends to chat is an action that’s conducted through a variety of different means, this including a tap with NFC (on Android and BlackBerry devices only, of course), SMS, Email, and the BBM-exclusive Barcode Scan and/or PIN code entry. This system has appeared slick and simple – certainly a plus for the whole ecosystem. Of course there’s no simple search function, as it’s not the same sort of situation as working with a social network like Google+ and Hangouts. 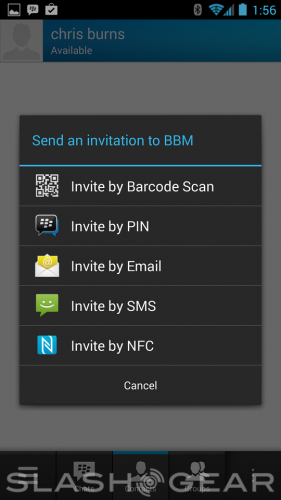 Settings range from the changing of notification tones to saving Chat History. You’ll be able to change the LED notification light for the app (if you’ve got such a light on your device) as well as change the way you look at contacts – list or grid. There’s also a way to turn off the persistent BBM Connected Icon in your notifications bar overhead, thank goodness.

There is not, however, a way to turn BBM off. Believe it or not, once you open the app up for the first time, you are logged in to BBM from that point forward. The only way we’ve been able to turn BBM off is to force quit the app – not very user-friendly. This notification also stays stuck in your Notifications list unless you flip the toggle in settings.

Chatting is an entirely enjoyable experience, able to make use of voice dictation (in Android) and a variety of smiling emoticons. Posting images is simple, uploads are fast, and the whole system seems to be running quick as a whip. We’ll be interested to see how this all holds up once the system is subject to the full brunt of Android and iOS users from the public on the servers. 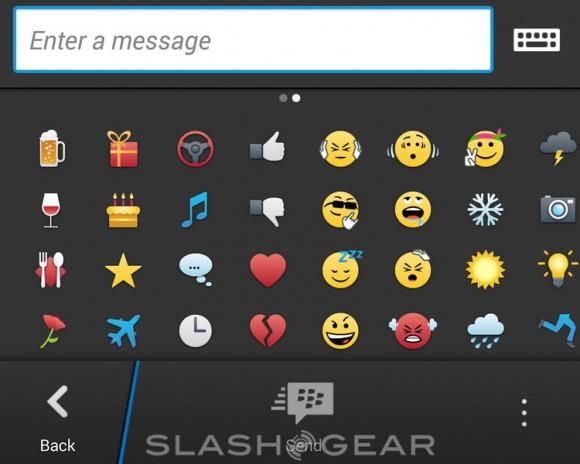 For those of you looking to use BBM as soon as possible, there’s a bit of an unfortunate block still up if you’re reading this within the first few days of the app’s launch. You’ll find a “BBM is on it’s way!” screen appearing when you first download the app, with access rolling out for the public over the next few days. BlackBerry isn’t taking any chances (or far less massive a chance) of a repeat of the first launch – servers should stay up this time around. 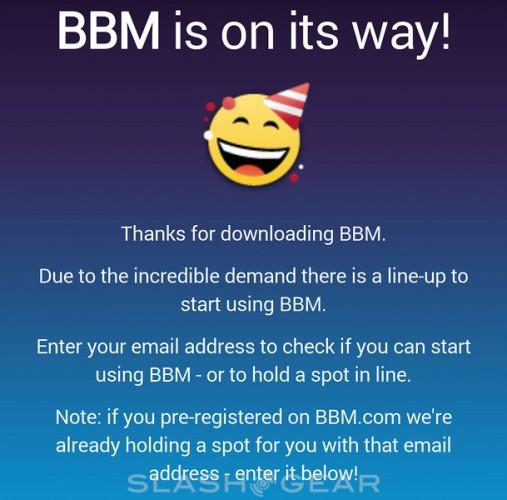 Once you’ve got access, please feel free to let us know how you’re liking the enviroment and if you’re new to the app OR if you’re returning from ages past. Is this your final straw, the last door holding you back from moving to Android or iOS? Or is it set to bring you back to BlackBerry with the lure of originality?