While this summer has no lack of action adventure movies going for it, what with the likes of The Avengers, Prometheus, and The Dark Knight Rises on deck, Battleship is prepared to be the cleanest selection of the group. The blockbuster category requires that a movie be spectacularly large in its on-screen scope, and the movie Battleship does this – and little else. Like each of the interviews you may have heard thus far on the film, including our most recent interview on Battleship with Industrial Light and Magic, this movie is definitely a “popcorn” flick – that means you should come prepared to quite simply sit back and be entertained, and entertained well.

The film Battleship was indeed conjured up by Hasbro as they own the rights to the timeless board game. Besides a couple of nods to the fact that the board game exists inside the film, there’s nothing to connect the two – save the battleship, of course. The visual effects in this film are second to none, and there are a handful of excellent or otherwise famous actors onboard, but know this right out of the gate: the most interesting character you’re going to meet is the USS Missouri. Keep that name in mind as we go through a quick summary of the film for context. 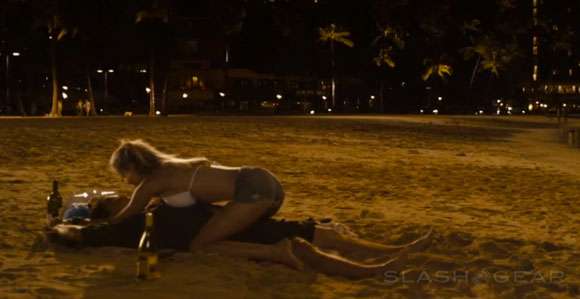 Take one part Air Force One, two parts Independence Day, and add in about 10 parts patriotic love for the Navy, and you’ve got an idea of what you’re in for in Battleship. One of several main protagonists in the film, Alex Hopper, (played by Taylor Kitsch) gets in a fight several years before the main bulk of the plot of the film, meets a girl, and is convinced to Join the Navy. At the same time in an unrelated event (also before the main plot line’s time) NASA sends a signal to a planet, the signal originating here on Earth in Hawaii. 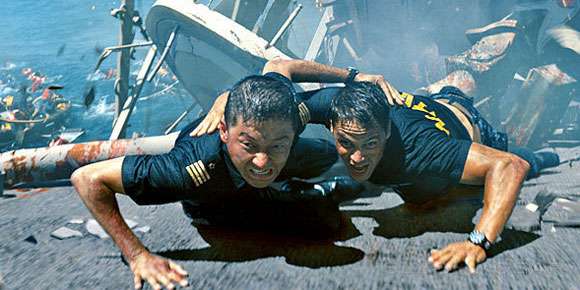 Fast forward 7 years to the present, 2012, and both Alex and his brother Stone are stationed aboard Navy Destroyer ships sitting comfortably in Hawaii – the plot thickens! The girl from earlier in the plot, Samantha Shane (played by Brooklyn Decker,) is revealed as the daughter of COMPACFLT Admiral Shane (Liam Neeson,) the Admiral being a superior of both of the brothers. Alex is set up for a coming-of-age-type situation, there’s love in the air, and five alien ships plummet to the Earth.

The rest of the film takes place (for the most part) in battle sequences in both Hawaii and Hong Kong – where one of the five ships has made berth. Of course the Aliens want war, the humans want to kill the aliens, and everyone has an awesome time getting blown up. In comes the most interesting character in the whole film as the new improved Destroyer ships prove useless against the alien threat. In comes the USS Missouri, aka the Mighty Mo, aka one gigantic battleship which in real life acted as surrender site for the Japanese fleet in World War II.

This ship is so interesting, one of the viral ads for the movie was dedicated to it alone. Have a peek:

And all the bad guys get killed and all the good guys win in the end and it’s a great time had by all – as you should well expect.

Why you should see it

I can’t overemphasize the idea that this is an effects-driven film. If you want to be impressed by the level at which the film industry – specifically ILM here – is able to operate on here in 2012, jump right in on Battleship. In our chat with ILM Visual Effects Supervisor Pablo Helman, we got an early taste of what we were in for this past week:

“It’s a ride. The visual effects work looks great – it’s a popcorn movie – and in regards to how some people ask me: can I actually turn off that part of me that actually just enjoys the movie? It’s definitely something you want to do here, you want to sit back, turn yourself off, and just be surprised and wowed by the images.” – Helman

BONUS: The soundtrack is headed by Steve Jablonsky, perhaps known best for having this same role on the Transformers series. Jablonsky composed the music for this film’s soundtrack, these compositions featuring guitarist Tom Morello – best known as lead guitarist and activist from the band that once was Rage Against the Machine.

In contrast with several high-impact science fiction films, action films, and even straight up love stories released this summer, the plot line for this movie has not been put under guard basically whatsoever. You can read the ending to the film on Wikipedia, for crying out loud. As a result, you’re going to get exactly what you payed for: explosions, gunfire, aliens death, and lots and lots of robots. If you’re looking for all the visual effects with an added bonus of a storyline that’s truly engaging, head to the Avengers. Industrial Light and Magic made that film a visual masterpiece as well – double down for the summer!

Battleship is a movie made for filmgoers looking to pick up some snacks, select their favorite theater seat, and tune out. This film is nearly pure entertainment, with just a hint of storyline twist and love interest to keep all parties attending the film from having a terrible time – that’s your action-hating date we’re talking about here. Make no mistake here though, of course, there is no having a terrible time at this film – it’s all fun and certainly brings on the big-money next-level action film power at right around an hour and a half long – in theaters right this second.

Don’t forget to check out the rest of our ever-expanding [Entertainment hub] for the biggest premieres of the summer and the hottest interviews with the people bringing you the futuristic technology these films need – now and into the future! 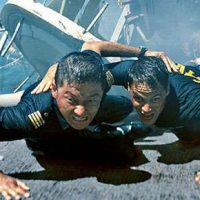 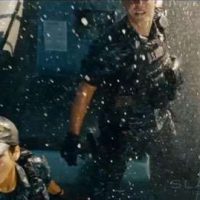 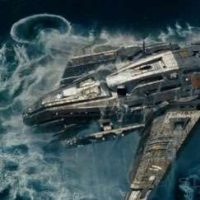 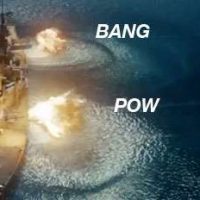 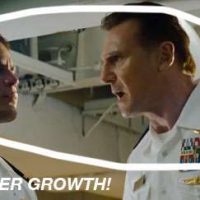 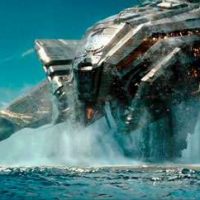 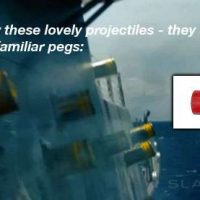 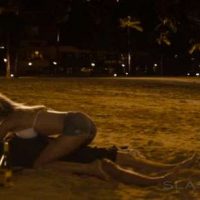 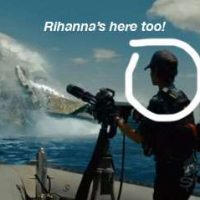