It was necessary this week for DICE GM Oskar Gabrielson to make a public statement about a female character in Battlefield V. For more than one reason. Twitter users (bot, troll, or otherwise) reacted to the latest trailer for the World War II-themed game with vitriol because they saw a woman, and that woman had a prosthetic arm. Apparently there was some issue with the fact that she existed.

The main message from Gabrielson was that there’s a female playable character(s) in Battlefield V, and they’re not going to be removed. That’s probably the most important piece of this equation. That was the most highly-loved message this week on Twitter, anyway.

First, let me be clear about one thing. Player choice and female playable characters are here to stay. pic.twitter.com/fvi9riUZDM

But Gabrielson also made mention of how they “want Battlefield V to represent all those who were a part of the greatest drama in human history, and give players choice to choose and customize the characters they play with.” Which is a bit much. Not the player choice bit, but the ‘greatest drama in human history’ bit, as if this game is anything but loosely based on real, accurate, authentic war. As loosely based on history as any game, no matter how accurate it strives to be.

He redeems himself in the next tweet, suggesting that the studio’s aim is to always do the following:

Then he brought on perhaps the most amazing Tweet of all time, gif-wise. It’s stuff like this that makes me feel OK about playing a video game where people are torn apart by metal and fire.

The Battlefield sandbox has always been about playing the way you want. Like attempting to fit three players on a galloping horse, with flamethrowers. With BFV you also get the chance to play as who you want. This is #everyonesbattlefield. pic.twitter.com/jZkzSRjIwL

Some reactions to the newest trailer suggest they’re upset the game won’t be historically accurate. They’re suggesting that because skin tone of playable characters can be changed, and people can choose to be female, they feel they’ll have an inauthentic experience.

How dare there be a battlefield full of black women with prosthetic arms in this World War II game? Right? /s

Ask yourself where you got all of your information on what World War II looked like, and felt like. Then ask yourself these 10 questions:

1. What about eye color?

3. How about realistic maps – how important is it to you that each map is authentic enough that a World War II veteran would be able to walk to a certain space and see a tin can they left near a tree at the edge of town?

4. What about ammunition? Each time you start a match, do you have a number of bullets based on how many bullets you had at the end of he last match?

5. Why can’t I leave the battle and just run away? What if I want to be a deserter, or betray my army and switch sides mid-match?

6. What about undergarments? Sock color?

7. Why don’t boots wear out, rendering the soldier less able to run around a map in all manner of terrain?

8. Why do characters come back alive after they’re killed?

9. Why do all of the guns fire accurately all of the time? How come guns never jam?

10. Why do both teams have the same start time? Why are there matches at all?

And if you see a woman in a World War II game with a hook hand and a bat with barbed wire around it and your first reaction is: “THERE WERE NO WOMEN IN WORLD WAR 2!” …Once again, you probably need to check yourself. 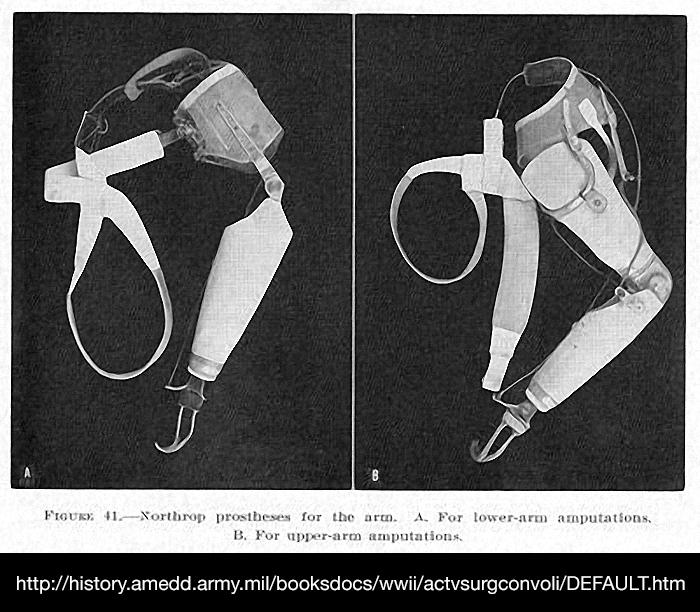 FUN FACT: This is what a prosthetic arm looked like in the 1940s. If someone lost an arm fighting in France in 1945, ideally they’d be sent home. But what if they wanted to keep fighting? Hand them a bat with barbed wire wrapped around it and send them on their way!

ALSO: See PCPowerPlay for 5 bad-ass women in WWII you need to know about, son.