This week the folks at Barnes & Noble have had leaked the newest addition to their NOOK family, a device by the name of NOOK Tablet, one that looks rather similar to the NOOK Color of the past but with a dual-core Texas Instruments OMAP4 processor instead. Inside you’ll also find 16GB of internal storage as well as a microSD card slot which can take 32GB, battery life of something around 4 hours of video playback (with wi-fi on) or 8 hours off. This device will connect over Wi-fi only and has the same 7-inch VividView IPS display as the NOOK Color.

The tablet has been thinned out by .02 inches, made lighter by .9 ounces, and increased in built-in storage by 8 GB. Other than that, This device seems to be rather similar to the original NOOK Color indeed. Have a look at our massive week-long look at the NOOK Color from back when it was called NOOKcolor right here: Week With NOOKcolor.

Other than that, there’s a bump in NOOK Color software in that it now features Hulu Plus, you’ve now got access to Rhapsody, MOG, and Grooveshark, and of course Pandora still works as it comes pre-installed. Real Simple and The New Yorker have been added to the Barnes and Noble library, and games such as Scrabble have been added to the basic NOOK Color store of games. 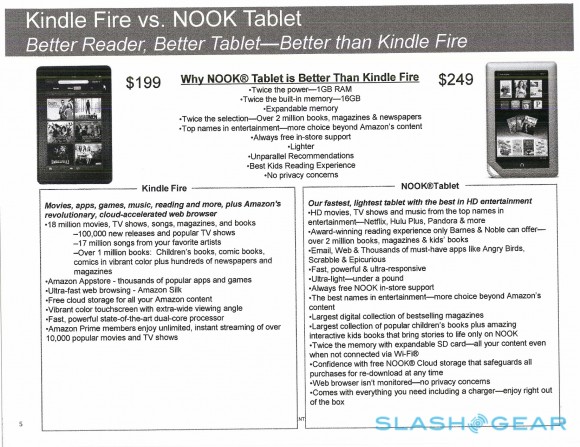 The current NOOK Color will be $199 in the near future while the new NOOK Tablet will be $249, this making us very much have to think about whether we want an ultra-inexpensive dual-core tablet or an undeniably inexpensive original NOOK Color. Think about that! Of course the whole thing will have to be rooted and turned to Android UNLESS the interface has been opened up beyond what we’ve seen on the NOOK Color thus far. We’ll just have to wait until Monday when all of this information comes out officially.