This week we’ve had a chat with Mark Daiss, Product Manager for Yahoo Aviate & Aviate Co-founder on the successful launch and continued updates to the Aviate Android launcher app. With the addition of Yahoo search to the app this week, the full replacement of your standard smartphone user interface is primed for action. Just in time for Christmas, just in time to change the way your brand new Android smartphone looks from the inside out. Supposing you want the Yahoo experience, that is to say.

Aviate isn’t brand new. In fact, it’s been in production for several years. The Beta of this app was only just released a bit over a year ago, and they joined the Yahoo team not long after that.

“We had a strong Aviate Beta release in October 2013,” said Daiss, “joined Yahoo in January 2014, and our daily active user base has doubled by 2.5x since we announced the general availability of Aviate in June 2014. Our users interact with Aviate about 100 times per day. Additionally, 75 percent of our users engage with Spaces, our auto- categorization and contextual feature that surfaces information to your homescreen the moment it’s useful, more than 10 times per day.”

Below you’ll see several screens from the Aviate app update that’s been released this week – for free, as Aviate always has been. 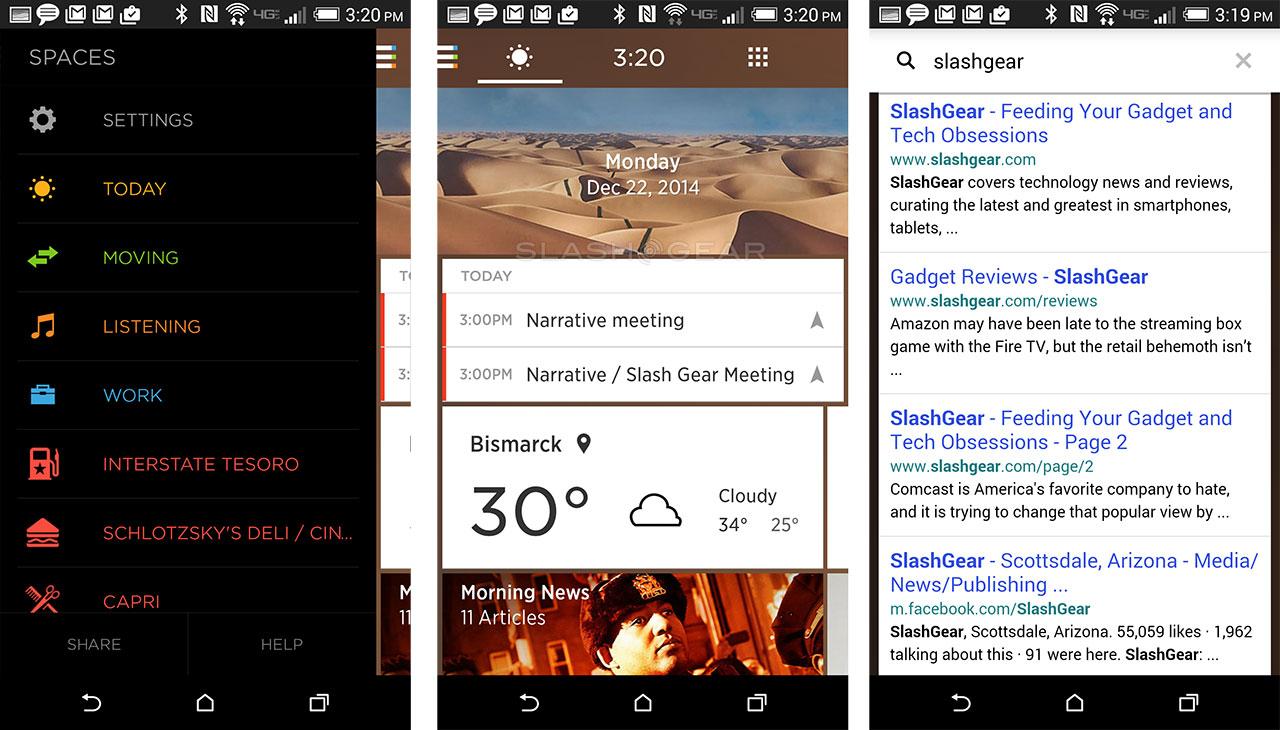 “Aviate makes the phone experience simpler to use while also bringing intelligence to the homescreen,” continued Daiss. “On the simplicity side, Aviate auto-categorizes apps in folders called Collections so that users don’t have to manage apps themselves. Upon install, Aviate immediately categorizes apps and continues to do so with every new app that is installed.”

“On the intelligent side, Aviate surfaces information at the moment it’s useful. The concept behind Aviate is to use contextual signals — be it time of day, location, or calendar data — to bring the user experiences forward and make phones more intelligent.”

“With Aviate, users can expect to see the information they need right at the moment it’s useful.”

This experience uses Android as its base – Google’s standard Android experience is found in their Google Now Launcher – available for many smartphones and tablets as well, also out and free right this minute. The crew responsible for creating Aviate wanted to take the experience in a new direction.

“Aviate wanted to take advantage of what phones are capable of in terms of understanding where you are, what you’re doing, and what you need.” Daiss continued, “We thought the homescreen was the best place to start as it allowed us to build technology that put content in front of users at the perfect moment.”

“Aviate’s vision is to connect you to the world’s information the moment it’s useful.”

“In thinking through how to accomplish this vision, we looked to mobile search and thought about how much your phone understands about you — your location, your contacts, your calendar, your emails. And we imagined context becoming a part of that mobile experience.”

The newest update to Aviate adds several bug-fixes and odd features, but the biggest bump is with the Yahoo search bar. This isn’t the only way Yahoo is expanding its reach in the search space. You’ll also find it popping up as the default search engine for Firefox.

“Yahoo is continuing to invest in context and improving search, because that’s where the future of mobile is heading. And, it’s evident that users are interested in more intelligent devices, illustrated by the way Aviate’s daily active user base more than doubled since launching in June.”

You can download the Yahoo Aviate launcher from Google Play right now. All you’ll need is a smartphone or tablet with Android version 2.3.3 and up. If your smartphone was released in the past several years, there’s a very GOOD chance you’ll have a version of Android that’s good to go.

As Yahoo Aviate is a launcher experience that competes with Google’s Now Launcher and Yahoo is an ever-growing entity in the smart device space, it seemed only right to ask Daiss whether or not this launcher was a sign of the times – whether or not Yahoo would eventually release their own smartphone.