Android devices run on a wide gamut of hardware configurations, ranging from the humble “basic” call and text handset to the flagship powerhouse. But despite even the biggest of computing muscle available, Android smartphones and tablets are still beset with performance problems, from using up too much CPU, eating up too much storage space, or draining your battery faster than you can charge. Security firm AVG has just revealed which apps are guilty of those crimes for this year’s second quarter and the results are rather surprising.

You probably wouldn’t expect it, but Snapchat is at the very top of that list. Contrary to the ephemeral nature of its content, its simultaneous use of the camera, Wi-Fi/cellular data, and GPS, all at the same time, means that its effects on your phone are long lasting. It manages to even displace Facebook as the top performance killer on Android.

Another completely unexpected entry is Tumbler who is noted to consume the most data consumption, greater than even Netflix and Spotify combined. AVG doesn’t elaborate on why the social network incurs the highest traffic despite the relatively lower level content that is viewed in the app.

Some of the data revealed by AVG are downright puzzling. Like why would Words with Friends need to run when you start up your phone and consume that much battery and data? Others, like Chrome’s voracious appetite for your storage space, is well known, even on desktops. Of course, there are also the mainstays of AVG’s list, which include Facebook, now joined by its Facebook Pages Manager, and Google Play Services. 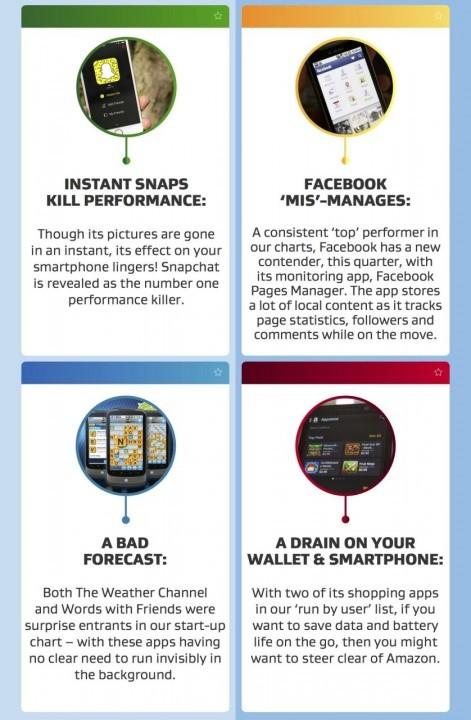 AVG isn’t trying to scare off Android users, says the report. It’s meant to arm users with knowledge on which apps to avoid like the plague. Unfortunately, their presence on AVG’s top 10 list implies that these apps are also the most used and most wanted, leaving users in a conundrum.