Automatic has pushed out a new app for iOS, with Automatic 2.0 bringing not only a redesigned UI but fresh features like fuel level warnings that can even remind drivers of certain models with a push-notification if they need to top up the tank. The new app, which works with the Automatic dongle that plugs into a car’s dashboard, also gives more user-control over when the speed alerts kick in, allowing risk-takers to silence the nagging.

Previously, the app automatically set the speed notification at the legal limit. After requests from users, however, Automatic will now allow them to set their own threshold. 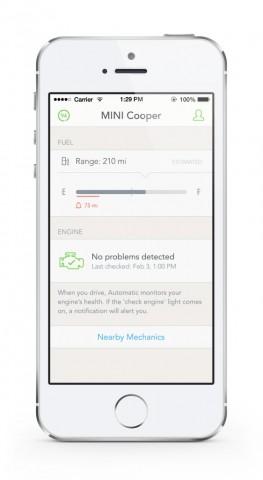 The alert itself has also been changed, with the app now making a single warning chirp when the speed threshold is passed, and then not sounding again unless the speed drops and rises above that limit a further time.

As for the fuel level integration, with compatible models the fuel remaining in the car’s tank will be flagged up in the app. Automatic 2.0 will also predict remaining range, based on usual driving habits.

A push-notification will be fired out when the level gets low, user-customizable as to how close to empty you’re willing to get, and set either by volume – e.g. a quarter of a tank – or by range – e.g. 80 miles left of driving.

Thanks to the platform’s integration with services like Twitter, SMS and IFTTT, it’s possible to have fuel status trigger other methods of communication. So, you could have your hue lights flash red if you need to allow extra time in the morning commute to fill up.

Unfortunately, not all cars will support the new feature. In fact, Automatic estimates, around half of models otherwise compatible with the dongle won’t report fuel levels; there’s a checker to figure out whether your car will play nicely or not.