Audi is really giving mobile devices a good run this year. After a new smartwatch custom made by LG, the car maker is also turning to tablets. But make no mistake, this isn’t your regular Android tablet simply slapped on with some car-related features. Like the Audi smartwatch, this tablet has been meticulously designed and curated by Audi not only to bring the latest car diagnostics, navigation, infotainment features to backside passengers, they have also been designed to protect said passengers in case of an accident.

Of course, the Audi tablet does all your usual infotainment and navigation duties. You can control the car’s FM radio or select music to be played either from the tablet’s own storage or the front unit’s hard drive or even an optional optical disc drive. You can look up places and navigation routes and send them to the front unit for the drive to accept or reject. You can also view the car’s status and diagnostics information from the tablet, whether or not it’s attached to the connector, as long as the tablet remains connected to the front unit via WiFi. WiFi is really the main communication line between the car and the tablet, as the connector mainly serves as a power supply, so no 3G or 4G on this one.

The tablet is also a full-fledged Android tablet running 4.4 KitKat, though the familiar Android user interface is hidden behind the main Audi UI. But once there, you have access to more content and apps, pretty much like you would on any Android tablet, with full access to Google Play Store and Movies, which means lots of games and distractions for the young ones and the young at heart. 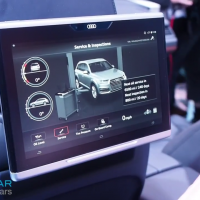 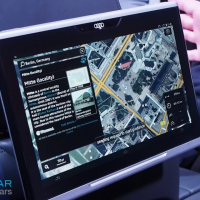 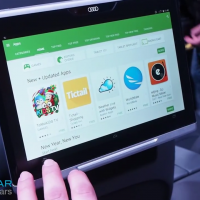 The tablet itself is manufactured by Pegatron and runs on an NVIDIA Tegra 4, not exactly the more powerful Tegra K1 or the just announced Tegra X1. That said, the tablet is designed by Audi itself to match its requirements for safety and quality. According to the car maker, its crash tests revealed how fragile and dangerous consumer tablets can be during an accident, breaking glass and deforming its shape under such sudden and extreme forces. Using special glass and a stacked display formation, Audi is able to prevent the tablet from breaking and bending. In addition, a special coating makes the tablet viewable even in bright light and when moving and it is more resistant to smudge than most consumer devices. Our first brush with the tablet’s display gave us the impression of touching satin.

The new Audi tablet will be offered as optional accessories to the Audi Q7 later this year, either in one or two seat configurations. The current iteration is just the first step in Audi’s grand scheme of things. For now, the tablet is only able to read information off the car but future versions will also be able to control some of the car’s settings, most likely environmental ones like air conditioning and lighting.