When is an SUV not quite an SUV? When it’s Audi’s Q8 Concept, freshly revealed at the North American International Auto Show (NAIAS) 2017 today. Blending the size and off-road abilities of an SUV with the design elements of a coupe, and then throwing plenty of new tech – including a plug-in hybrid drivetrain – into the mix, the Q8 is Audi‘s vision of a new, range-topping luxury car.

On the outside, it’s clearly related to the Q7 SUV, though a whole lot sleeker. 16.5-feet long, and with 9.8-feet of that being wheelbase, it features a bold fascia with an even wider version of Audi’s now-traditional Singleframe octagonal grille. That has honeycomb mesh, plus six upright double-bars that, Audi says, emphasize the height. 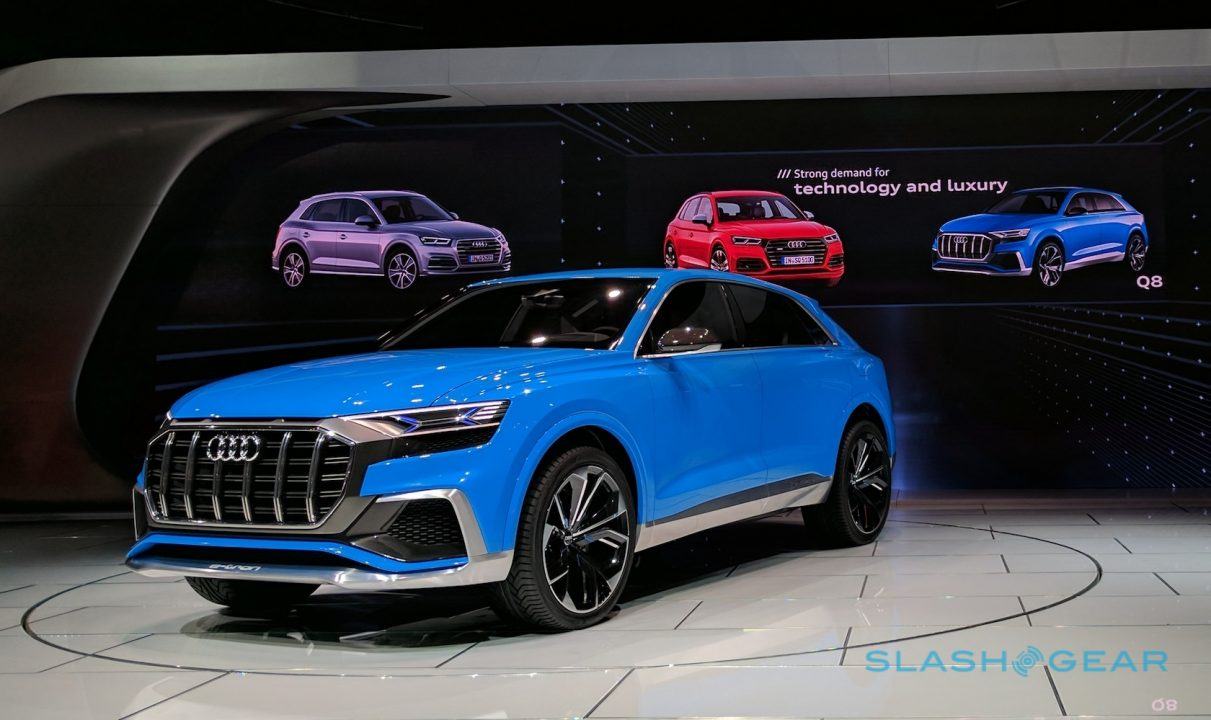 Around that there’s a contrasting-color frame, and then turbine-styled air inlets and an aluminum blade detail to the lower edge of the bumper. Audi has done away with the main headlamp cover-glass, giving each lighting unit its own individual glass cover instead, and integrating them into the extended Singleframe. Blue laser signature lights are incorporated into the digital Matrix laser lights for high and low beam, as we saw on the R8 last year.

It’s not the only fancy lighting. Just below the edge of the hood is an LED light guide that wraps around the headlamp edges. That also gives the e-tron signature lighting effect. It works well against the Bombay blue paint job. 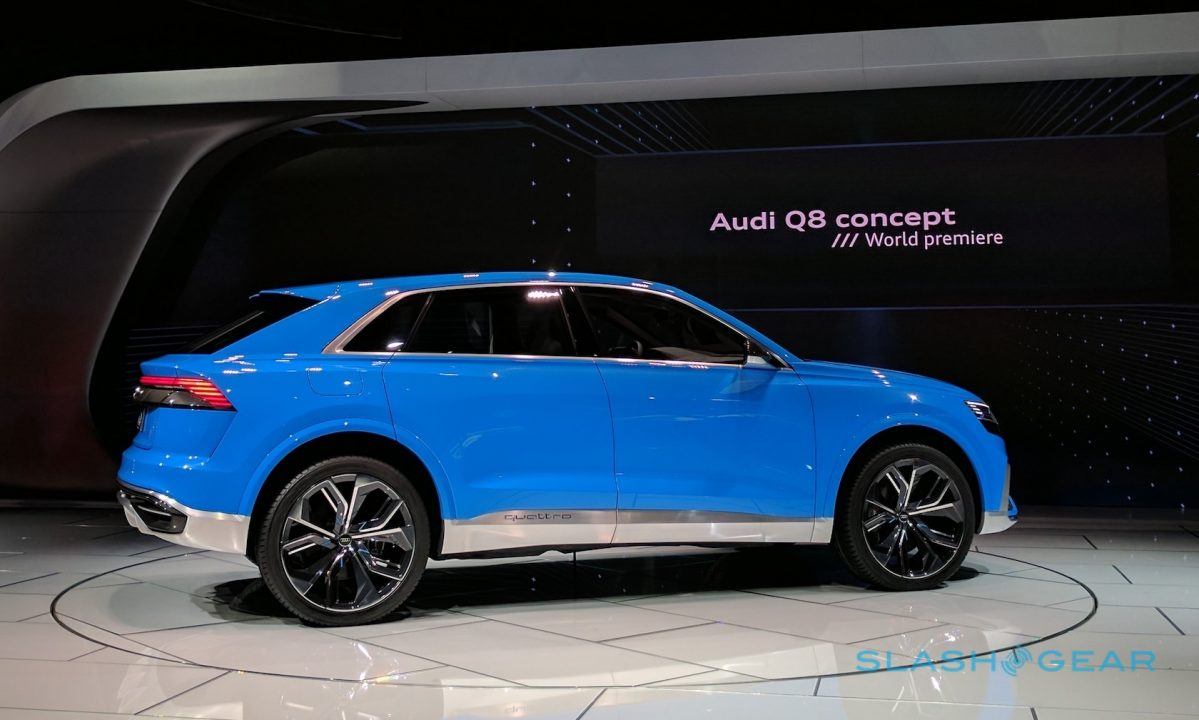 Moving around the side, there’s frameless windows and all of the body lines sweep upwards toward the rear for a sense of dynamism. Though 5.6-feet tall, the sloping rear roofline picks up hints of Audi coupes. Power doors swing open to preset angles when their touch-sensors are lightly pressed. 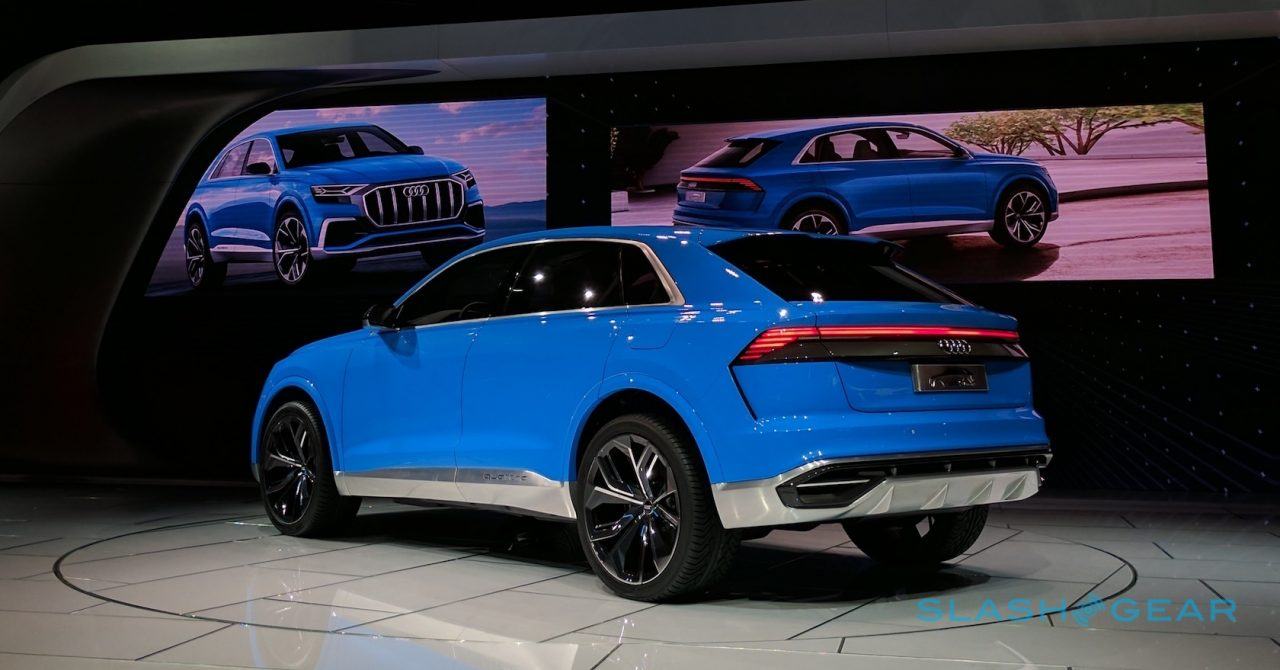 Audi says it borrowed from the Ur-quattro style for the broad C-pillars, plus the flared shoulders over the wheels, though they’re also reminiscent of previous Audi Prologue concepts. Aluminum sills are echoed by more aluminum around the tail lamps, though there’s also high-gloss Carbon Atlas on the diffuser. Unsurprisingly you get a power tailgate too.

Inside, rather than the seven seats of the Q7, Audi has turned the whole cabin over to cosseting just four people and their luggage. That means four big seats, surrounded by a horizontal wraparound arc that starts up beneath the windshield and continues around the doors. A floating center console has a shift-by-wire lever for the transmission, among other controls. 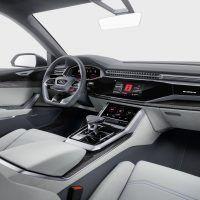 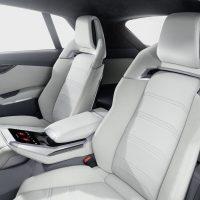 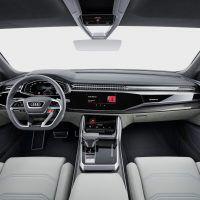 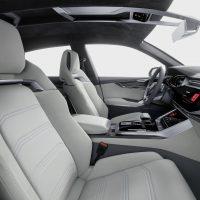 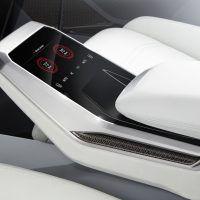 Each seat is made up of individual segments, and there’s 22.2 cubic feet of cargo space. Nappa and Nubuk leather is used in SUV-impractical pastel silver, while the headrests get a “structured textile” cover.

As for the technology, there’s a Virtual Cockpit display for the driver, with a 12.3-inch 1920 x 720 panel that can show more information than we’ve seen before. Alternatively, a dedicated “performance” view shows just the essentials: speed and engine speed. A head-up display is included too, with augmented reality feature that can overlay navigation instructions atop the actual junction you need to take in the road ahead. 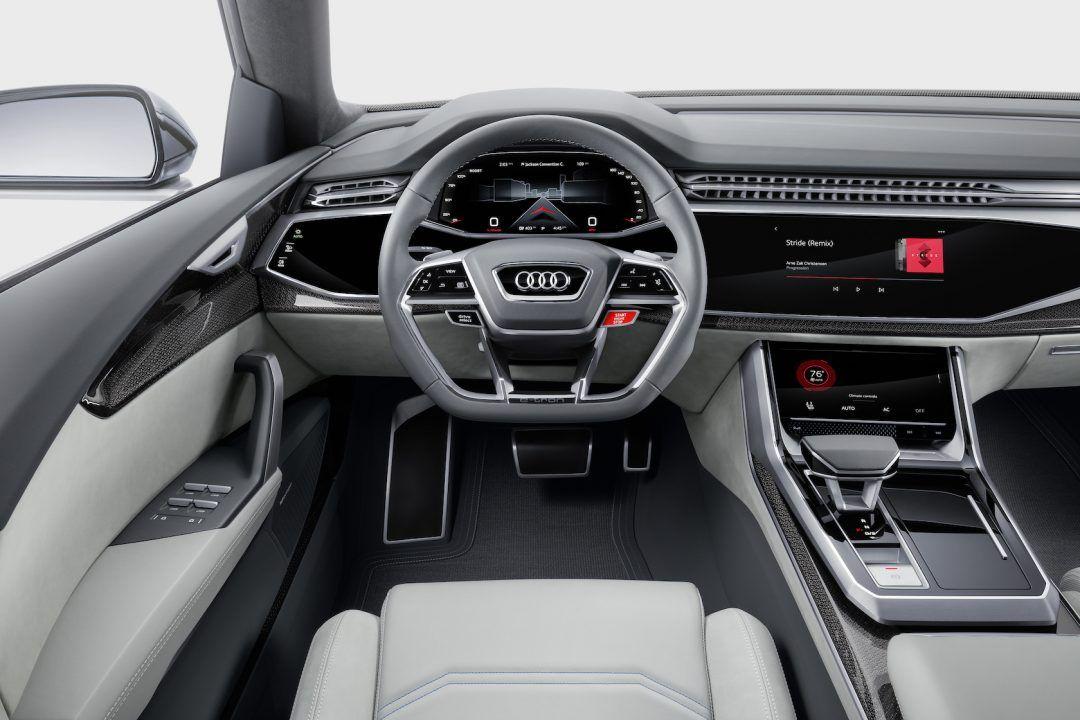 A central monitor in the dashboard is a touchscreen, and there’s another touchscreen lower down that’s dedicated to HVAC controls. That can be used while the wrist is resting on the transmission selector lever. It only shows front passenger controls if the seat detects there’s someone sitting there; otherwise, it defaults to a more simplistic UI. Indeed, getting rid of extraneous controls is a theme in the Q8’s cabin, with Audi replacing many physical buttons, switches, and levers with touch commands. 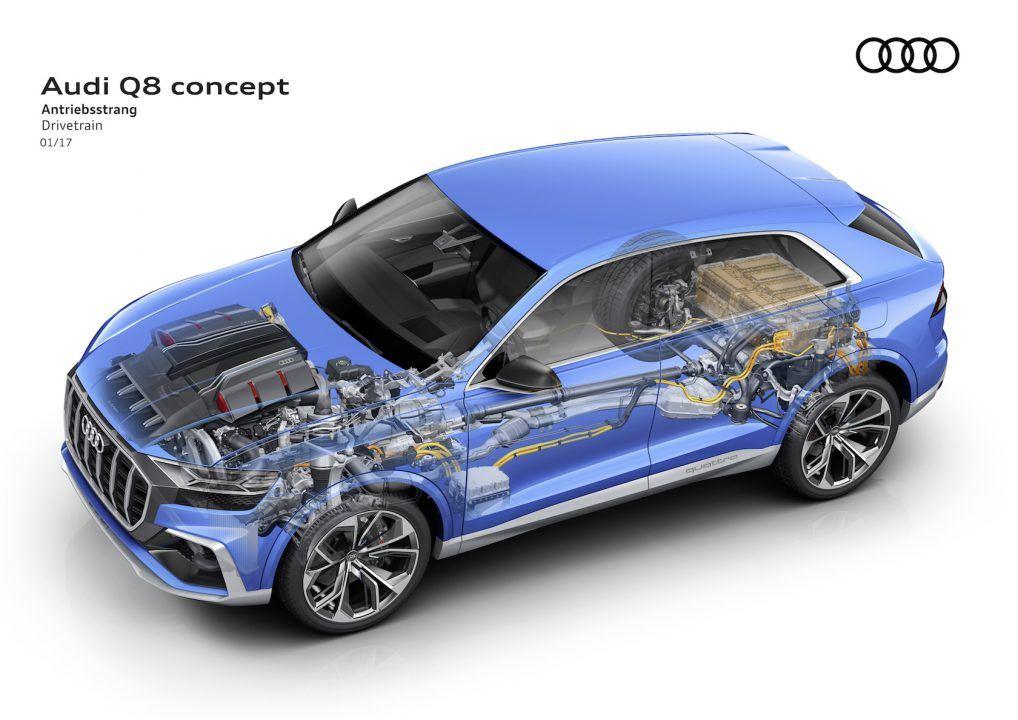 Under the sheet metal, there’s a hybrid drivetrain made up of a 3.0-liter TFSI engine and electric motors, combined with an eight-speed tiptronic automatic gearbox. The gas engine musters 333 HP and 369 lb-ft. of torque, while the electric motor adds 100 kW of power and 243 lb-ft. Overall, that pushes 330 kW (402 HP) and 516 lb-ft. of torque through the quattro all-wheel drive. 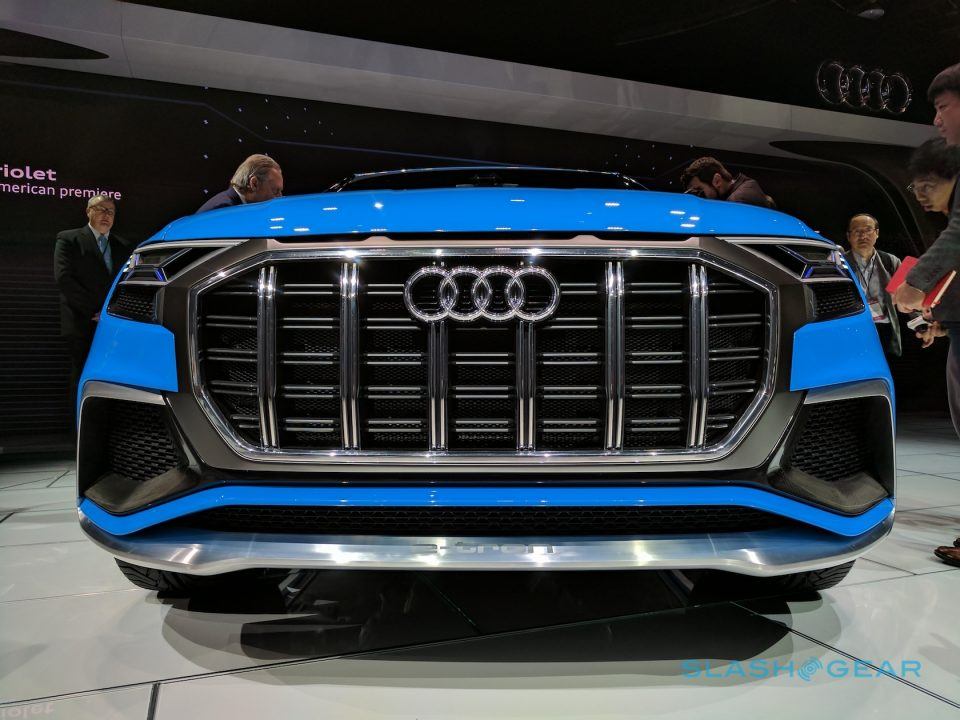 As we’ve seen in previous production Audi EVs, there’s smart control over the powertrain. Using the company’s predictive efficiency assistant, the route ahead is analyzed so that the Q8 knows when it’ll get the best out of electric-only, and when it should switch on the gas engine. Audi also plans to use Car-to-X services to augment that assessment. Alternatively, drivers can manually switch between EV, hybrid, and battery-hold modes.

The quattro system has selective wheel braking for torque vectoring, together with adaptive air suspension with controlled damping. A 3.5-inch ride height adjustment is possible, too. The concept has 23-inch wheels and 20-inch ceramic brake discs. 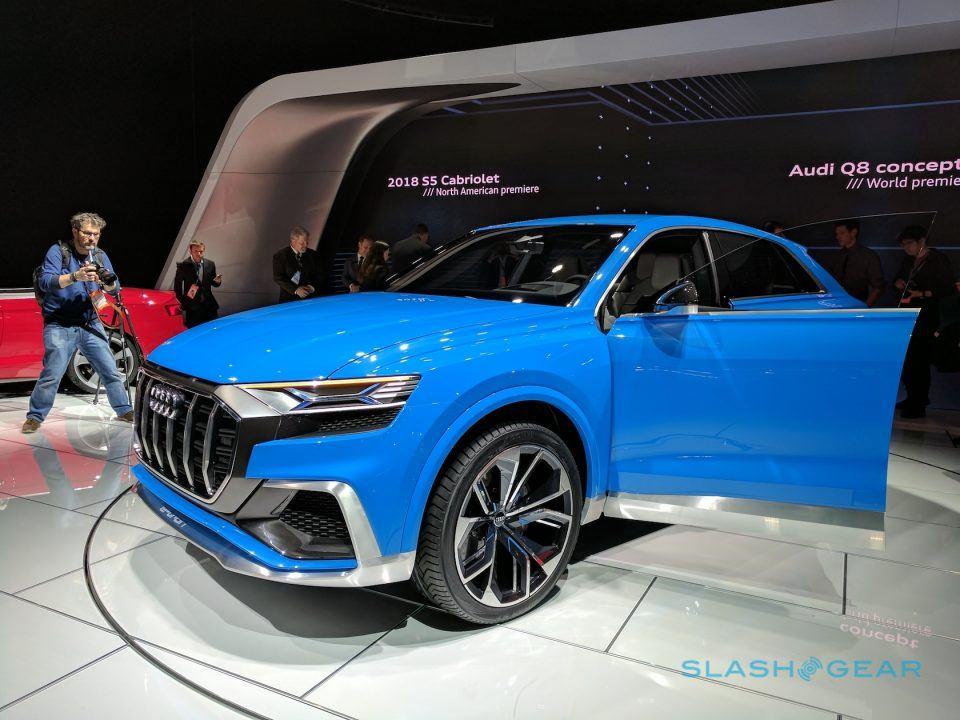 According to Audi, though the Q8 concept shown off today is, as the name suggests, a concept, it does preview a production vehicle. A new model based on the concept is due to launch in 2018, the automaker claims, sitting above the Q7 and offering an SUV-esque alternative to the A8 luxury sedan. That should put it right up against truck-exotica like the Range Rover and, indeed, even super-luxury models like Bentley’s Bentayga.