Audi was the first German car brand to release a production-ready electric SUV: The e-tron, a vehicle unmistakably an Audi with its familiar silhouette and bold Singleframe grille. The e-tron SUV has none of a modern electric car’s quirkiness, which is either a good or bad thing depending on how you look at it: Audi’s search for something with mass-market appeal left it looking pretty much like a conventional gasoline-powered SUV. If you’re pining for more style in your electric Audi SUV, though, the German carmaker has unveiled the 2021 Q4 Sportback e-tron.

“We are really excited about this car, we feel really positive about the whole package,” said Ambar Kaya, exterior designer for Audi AG. “It’s such a good car for today’s market that we feel like it’s going to hit the ground running.” It’s no secret that SUVs and pickup trucks are the car world’s current favorites, and any carmaker would be amiss not to have an SUV or two in their portfolio.

According to recent data, sport-utility vehicles made up 47-percent of U.S. auto sales in 2019 while sedans were only 22.1-percent of the pie. By 2025, meanwhile, the combined sales of SUVs and light trucks are expected to climb to 78-percent, compared to 72-percent in 2019. While the data only refers to gasoline-powered vehicles, you don’t need a degree in marketing to determine what people are buying in terms of new cars, whether they’re electric or otherwise. 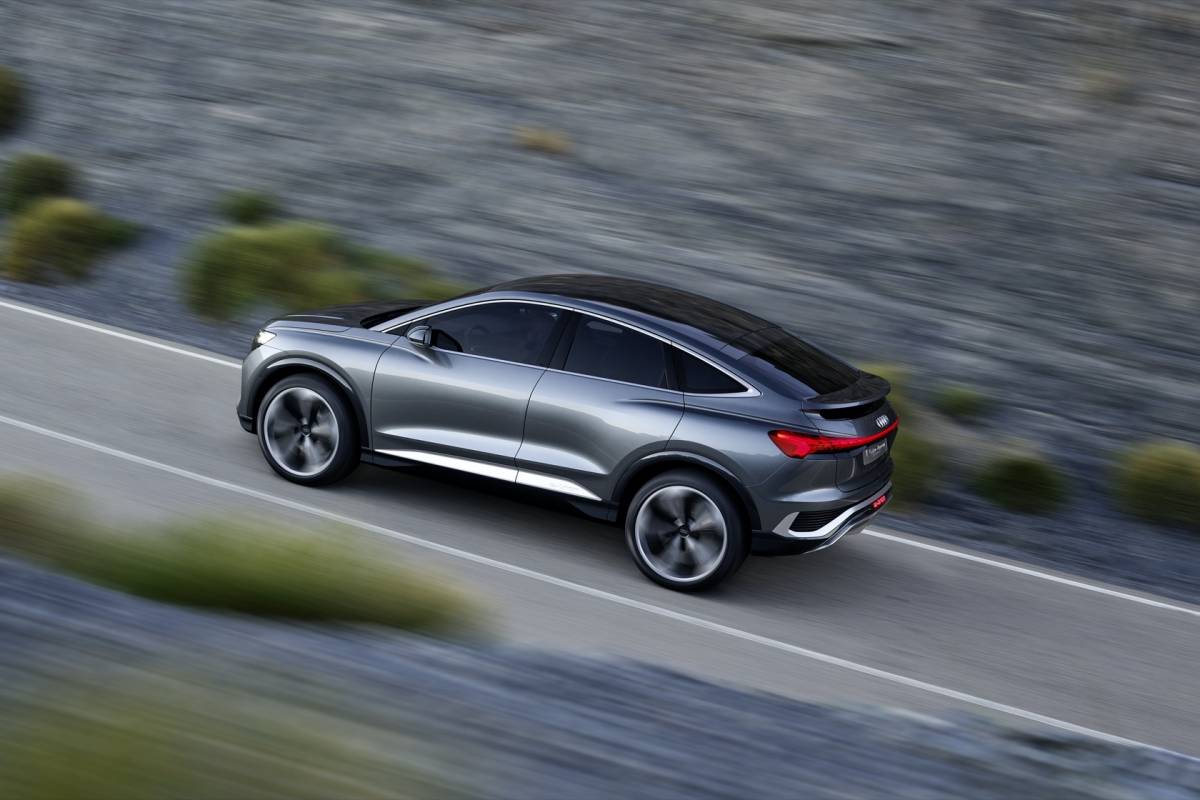 I was at the 2019 Geneva Auto Show when Audi unveiled the 2021 Q4 e-tron, the first Audi to use Volkswagen’s MEB architecture. Back then, it was clear that Audi was evolving a new design philosophy with more rounded surfaces and softer lines – qualities that I went on to experience first-hand in the gorgeous e-tron GT around the streets of Los Angeles. 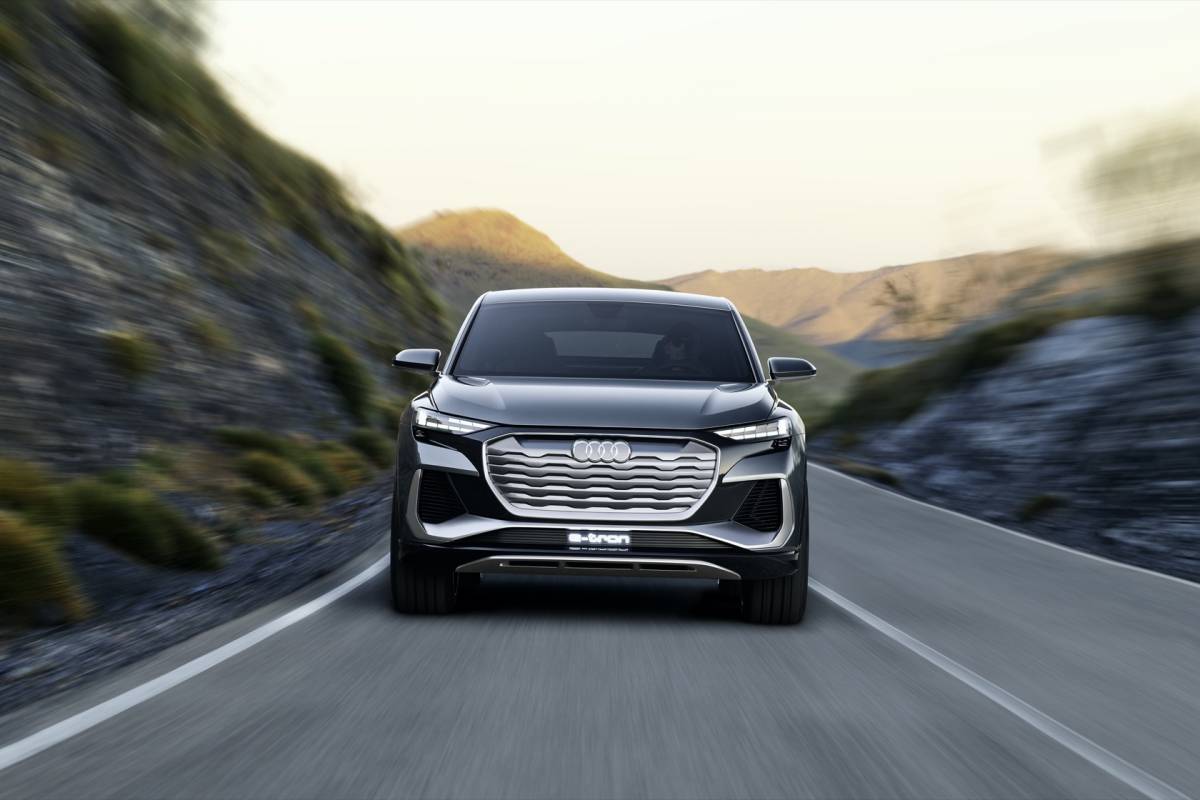 “I’m really happy with the way it turned out, it’s got an aggressive, bold stance on the road. Take notice of how the fenders are soft and muscular,” added Kaya. “I’m really pleased we got those in the production car because it felt a little bit like some of our cars got a bit too stiff.” The Q4 Sportback e-tron concept has Audi’s characteristic Singleframe grille, but the grille is surrounded by a black mask to give it a distinctive road presence.

Since we’re talking about a ‘sportback,’ it also has a progressive stance and a sloping roofline. “And we did it without losing too much headroom,” Kaya promises. But the concept’s best feature, in my opinion, is its Audi Digital Matrix LED headlights. “The lamps are really innovative. For the first time on a production car, the user will be able to change the light system or graphic depending on their preference,” added Kaya. Will it make it to all U.S.-bound Q4 Sportback e-tron? Maybe, maybe not; that comes down to local regulations. 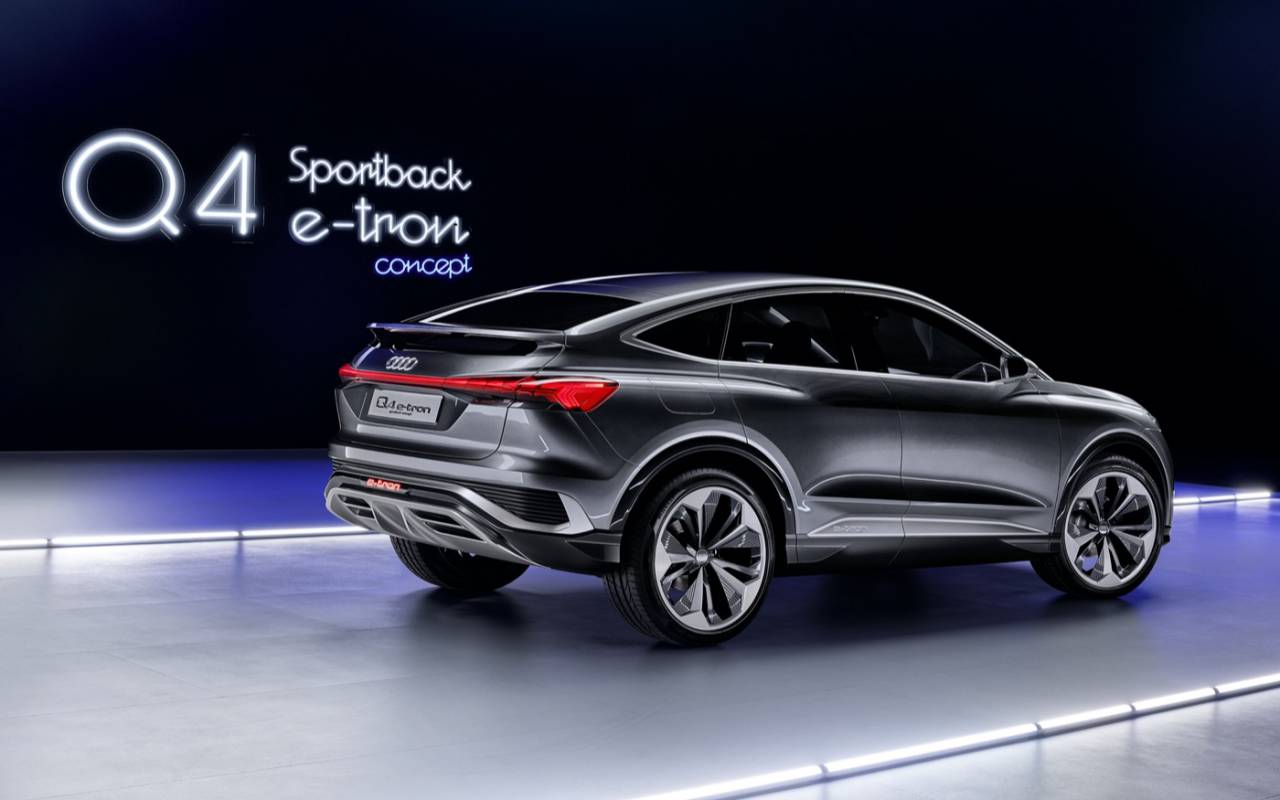 You won’t mistake the 2021 Audi Q4 Sportback e-tron for a high-riding sedan, that’s for sure. It does have a muscular stance, though, with the wheels pushed outward towards all four corners. The Q4 Sportback e-tron measures 15.1-feet long (4,602 mm) and is shorter than both the e-tron SUV and the Q5. “That’s not big, that’s a compact car in the upper compact segment, I would say,” said Josef Schlossmacher. “But if you look at the 9.1-foot wheelbase (2,773 mm) and the small overhangs, that’s a lot for a compact car.”

Audi is celebrating the 40th anniversary of its iconic Quattro rally car this year. And in a way, the new Q4 Sportback e-tron is channeling some good ole’ rallying vibes. 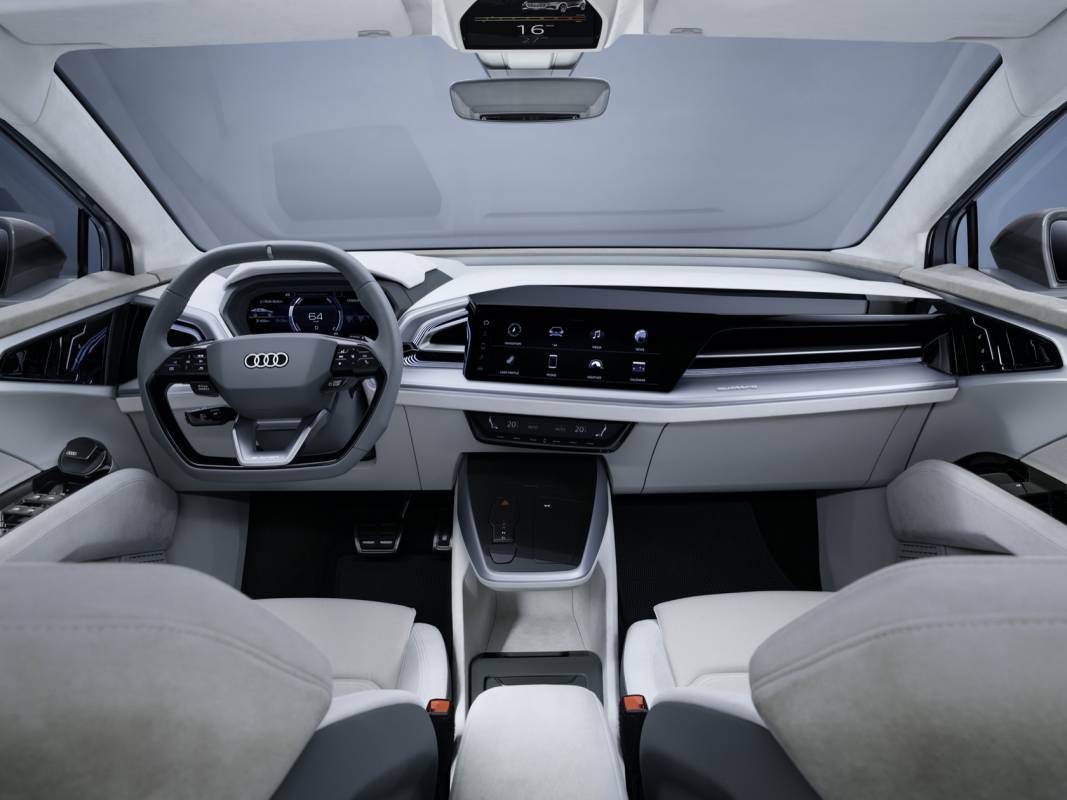 There’s an electric motor in the front and one in the back, essentially making it a proper Quattro with AWD. But the Q4 Sportback e-tron can switch off its front electric motor when cruising, and it can switch it back on again when you step on the right pedal. It has an estimated WLTP-rated range of 280 miles (450 km) with the standard 82 kWh battery pack. 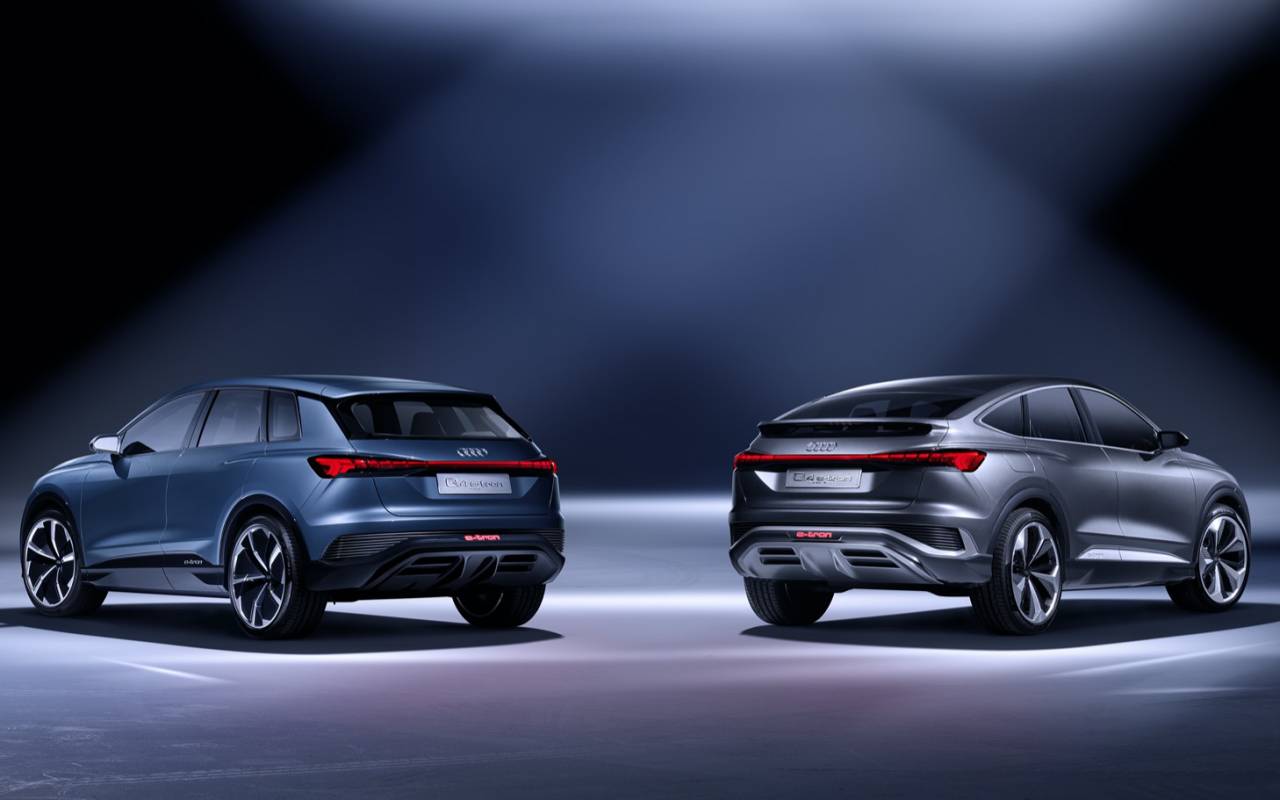 The Q4 Sportback e-tron concept produces a combined 301 horsepower and 228 pound-feet of torque with two electric motors, enough to get it from 0 to 60 mph in 6.3-seconds and a top speed of 112 mph. And yes, a single motor variant is already in the works. It will have a rear-wheel drive and a smaller battery pack which, according to Audi, should still be enough for around 500 miles of range.

Aerodynamics play a significant role there, on any car of course but particularly for an EV. SUVs aren’t traditionally associated with doing well at that, but with a drag coefficient of 0.26 Cd only the Tesla Model X is more slippery through the wind.

The Q4 Sportback e-tron concept relies on both a glass-mounted rear spoiler and rear diffuser for its airflow control. They don’t hurt the looks, either: it’s a great-looking package with its aggressive yet high-end stance, rear light bar, short overhangs, and distinctive façade – dare I say it looks more exuberant than the e-tron SUV? I’ll leave that to you to decide, but if Audi wants the Q4 Sportback e-tron to sell competently compete with the likes of Tesla, the price should be highly competitive. 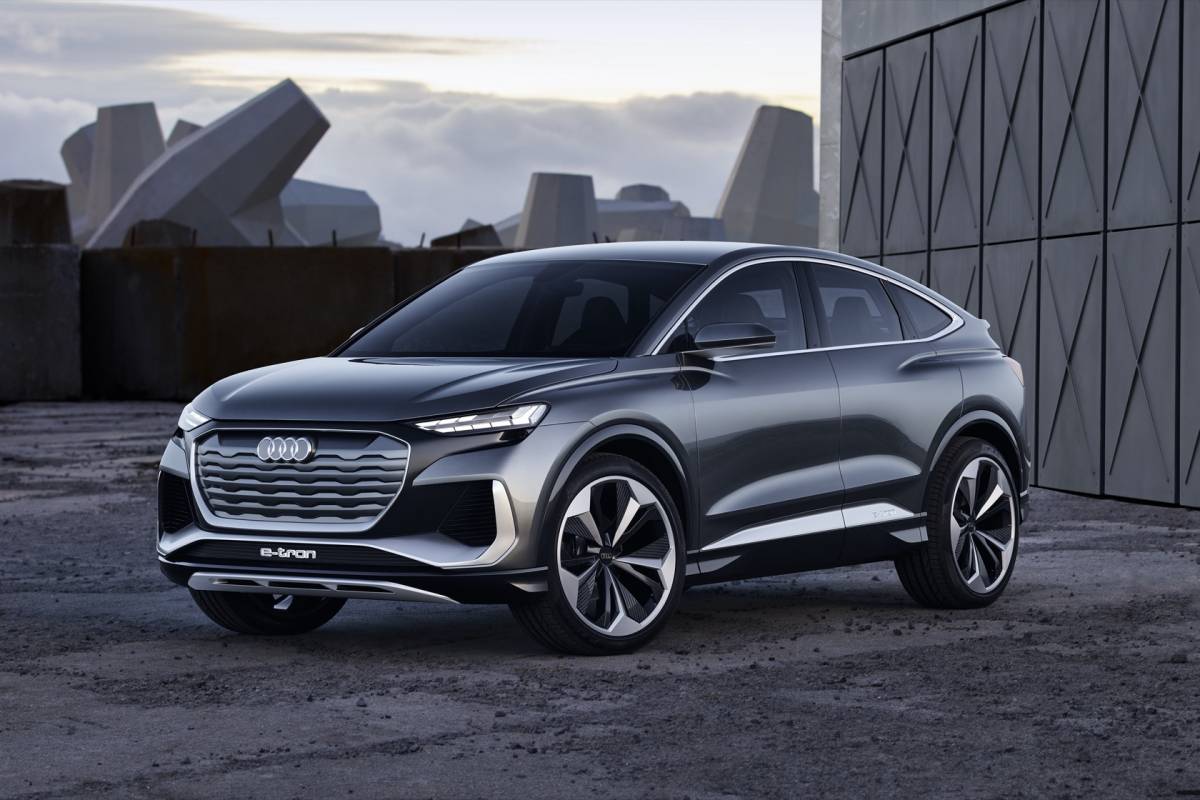 Base prices are expected to start around $45,000 before tax credits, which I suspect is the sweet spot for potential buyers. All I know is, I can’t wait to try it out on the road. “We hope that we can introduce the car already on a Motor Show in spring 2021, but the first markets will really get it in summer 2021,” Schlossmacher concluded. The countdown is on.