Prepare for some Audi badge confusion when you’re next at the dealership, with the German automaker preparing to make a huge change to how its cars are named. The current model names – like A4 and A5, as well as Q5 and Q7 – are staying, but Audi plans to do away with engine displacement as an indicator of power. Instead, it says it has come up with a system that puts all vehicles – no matter the drivetrain type – on an level, and easily compared, footing.

The goal, Audi says, is to better illustrate the power output of each model of its growing line-up. On top of that, it wants to move away from nomenclature that’s more specific to gasoline and diesel vehicles, given the increasing role electrification will play in the years ahead. That means more focus on the power the car has, and less on the engine responsible for producing it.

“As alternative drive technologies become increasingly relevant, engine displacement as a performance attribute is becoming less important to our customers,” Dr Dietmar Voggenreiter, Board of Management Member for Sales and Marketing at Audi AG, says of the change. “The clarity and logic of structuring the designations according to power output makes it possible to distinguish between the various performance levels.”

It’s not a bad intention, per se. One of the lingering issues facing new powertrain types, including electric, is that traditional metrics like engine displacement simply aren’t comparable. Horsepower and torque are the general benchmarks for measuring one vehicle with another, but they don’t take into account the kilowatt rating of EVs. That’s going to be more of a problem for Audi in the years ahead, with the automaker aiming for three in its range by 2020. 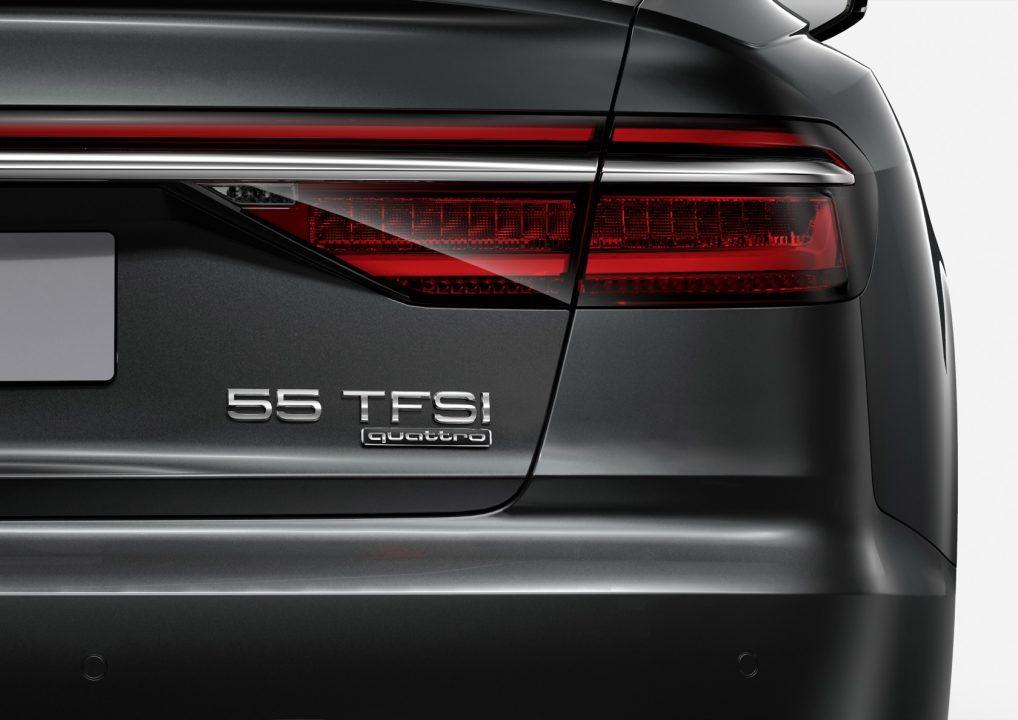 What does that mean in practice? For a start, an end to Audi putting engine size – whether that be “2.0” for a 2-liter, or “4.0” for a 4-liter – on its vehicles. Instead, they’ll have a two-digit number which corresponds to power output in kilowatts (kW).

So far so good, but confusingly that number won’t be the actual power output. Instead, Audi will be splitting the range of kilowatt power outputs into bands, and then associating each band with a number. That number will increase in increments of five.

In addition to the model name, and the two-digit power output band, the engine technology itself will also be included in the badge. That means TFSI for turbocharged gasoline engines, TDI for turbocharged diesels, g-tron for compressed natural gas, or e-tron for electric. Audi will make an exception for its high-end S and RS performance cars, which will keep their existing names, as will the R8 supercar.

From that point on, new cars will automatically use the new naming scheme. Audi plans to change any remaining cars over in time for the new model year changeover, in the summer of 2018.