The folks at AT&T are hitting it off big this week with device after device popping up on their network – the newest of these appearing today is the Samsung ATIV Smart PC, a device that can act as a tablet or a clamshell notebook with Windows 8 onboard. This device will be appearing with AT&T here in the United States sometime between when Windows 8 is unleashed on the 26th of this month and the end of the year – sometime in 2012!

What we’ve got here is a device that we’ve had some hands-on time with in the past – though this final iteration may prove to be a slightly different beast than what we saw back at IFA 2012. This iteration has an 11.6-inch HD PLS display working with an Intel Clover Trail 1.5 GHz dual-core processor under the hood and 64GB of internal memory right off the bat. It’s not yet known if you’ll be able to expand memory with a microSD card as many Android-based tablets are prone to be – we’ll see! 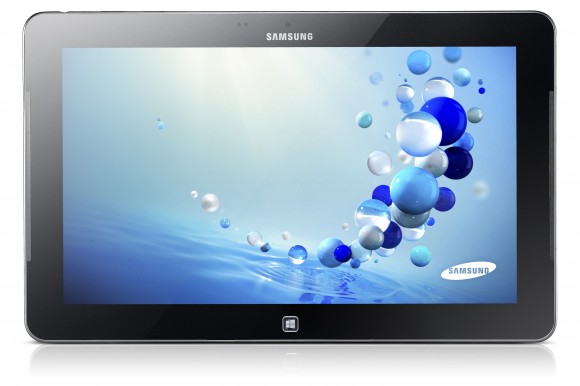 This device works with a detachable keyboard-docking system that makes it into a notebook, not unlike a collection of devices have been doing over the past couple of years – see our ASUS Eee Pad Transformer review (the original) for an early favorite. this Samsung device takes on a form factor that’s not entirely unlike the Galaxy Tab 2 10.1 with its forward-facing speakers and has its very own prevalent Windows 8 icon center bottom for your enjoyment. 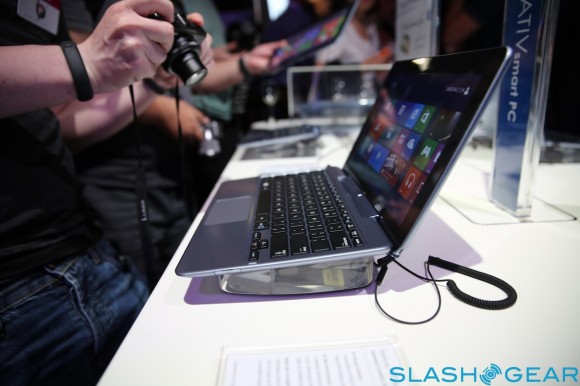 This device will be coming with Windows 8 installed, complete with trail versions of several Microsoft Office 2013 apps for productivity galore. This package includes Microsoft Word, Excel, and PowerPoint as well. Of note is the fact that AT&T does not mention what kind of connectivity this device will have – a good guess would be 4G HSPA+ or 3G nationwide – again, we’ll see soon! This device will likely be coming out either at the end of this month or the start of the next, so stay tuned!