AT&T has been awarded a patent that would let the company track subscriber browsing behavior, assign them a “reputation score”, and then block “high-risk” subscribers from being able to access file-sharing services. The patent is called “Methods, devices and computer program products for regulating network activity using a subscriber scoring system”. In other words, the blocking system could rely on tracking software installed on subscriber computers. The patent was spotted by TorrentFreak and relayed by Gigaom.

In the patent, AT&T describes the blocking methods as “protecting” users from their own browsing habits. This bit of Orwellian language will probably irk true believers in torrents and other peer-to-peer file sharing protocols. Not all file sharing is illegal, in fact much of it is aboveboard. Yet we must concede that intellectual property violations do exist in the wild and woolly world of file sharing.

The method described in the patent would assign a wide variety of scores, ousting the more egregious file sharers from “quarantine” areas on the network. We don’t know how AT&T would select quarantine areas, or whether the company would exercise its wisdom to discern legal from illegal file sharing. The patent seems to be broad enough to let AT&T make those decisions for itself, using whatever data analysis methods it deems fit to apply. 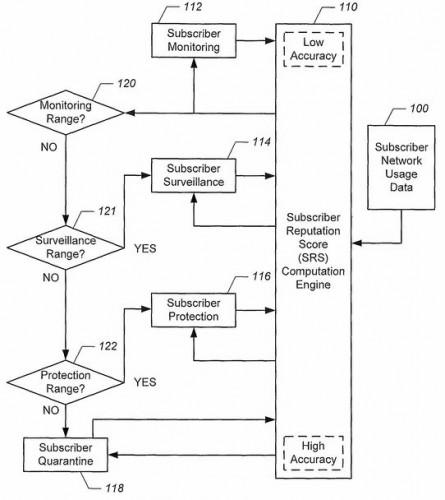 No timeline for activating the patent as a real-world measure is in place as yet. It is safe to assume, however, that AT&T would very much like to roll out the anti-piracy tactic given its track record. The company is especially bent on cracking down on piracy. Witness its earlier patents for tracking BitTorrent and other P2P content and reporting pirates to law enforcement.

AT&T stands to benefit greatly from reducing file sharing, legal or no. Unauthorized file sharing alone, TorrentFreak notes, represents “thousands of petabytes of traffic” each month — a huge drain on network resources. AT&T is hard at work increasing network bandwidth and cutting traffic at the same time by offering gigabit Internet, getting subscribers’ permission to snoop their browsing, and knocking out P2P. Doing it under the guise of being an upstanding law-abiding (and -enforcing) private company looking out for the intellectual property rights of good, honest artists may be a bit on the disingenuous side, but it does have a right to try and make the most efficient use of its networks. Whether that use curtailment will translate into lower costs for non-file-sharing subscribers is doubtful, however.