AT&T has jumped aboard the shared data plan bandwagon, revealing a sextet of new packages that allow up to 20GB to be split between up to ten devices. AT&T Mobile Share plans start at 1GB per month, and the carrier says data costs reduce (on a per-gigabyte basis) the more devices are drinking from the same 3G/4G bucket, when things go live in August.

So, for a 1GB plan on a smartphone, you’d be paying $40 for Mobile Share with Unlimited Talk & Text, and then $45 for the data component. Adding a basic or quick-messaging phone to that would be a further $30 per month, each extra smartphone would be $45, a 3G/4G laptop or data card would be $20 more and a tablet or gaming device would be $10 more.

If you choose a bigger data package, however, the cost for each smartphone decreases. So, if you opt for 20GB of data, at $200 for the base Mobile Share plan, each smartphone is $30 instead of $45. Additional data is priced at $15 per GB out of plan. 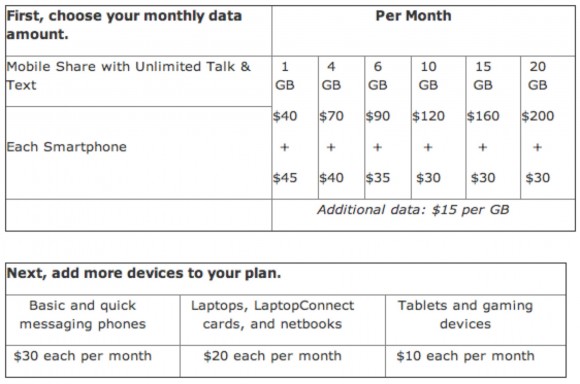