This morning AT&T held a meeting in which the following infographic was discussed – and it’s rather interesting. What we’re looking at here is AT&T’s statistics on how many people were accessing their Wi-Fi spots in both hospitality locations and retail locations. What they’re tracking here, therefor, is not only the amount of “mobile” people in that it’s just people with smartphones and tablets, but anyone accessing data. The statistics are wild, no matter how you look at the situation at hand. 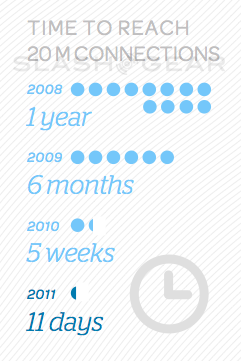 Next you’ll see where the customers are connecting from. AT&T splits this set of statistics up in to two categories: Hospitality Locations and Retail Locations. For the time between the start of the first quarter of 2011 to the time of the start of the second quarter of 2011, connections at hospitality locations tripled in amount. The amount connections increased over that same amount of time at Retail Locations, (such as FedEx and Barnes & Noble,) was 15.7% – indicative of the fact that people are much less likely to connect to an internet with their Wi-Fi enabled device if they’re in an AT&T retail location specifically. 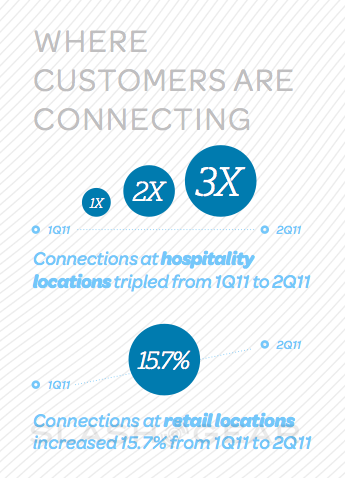 Finally take note of the rapidly jumpy line chart showing AT&T Wi-Fi connections by quarter over the past three years. Starting in the first quarter of 2008 there were a mere 3.4 million people connecting, while the latest figure, quarter 2 of 2011 racks up the numbers with 264.8 million people connecting. What’s more, total connections over the year are increasing at a radically drastic rate. In 2008 AT&T saw a total number of connections in at 10 million, 2009 just 85.5 million, and 2010 all the way up into outer space with 382.1 million. And what’s MORE, connections with AT&T’s Wi-Fi network are already at 443.3 million and counting – that setting the group up for another massive increase over last years total once more. 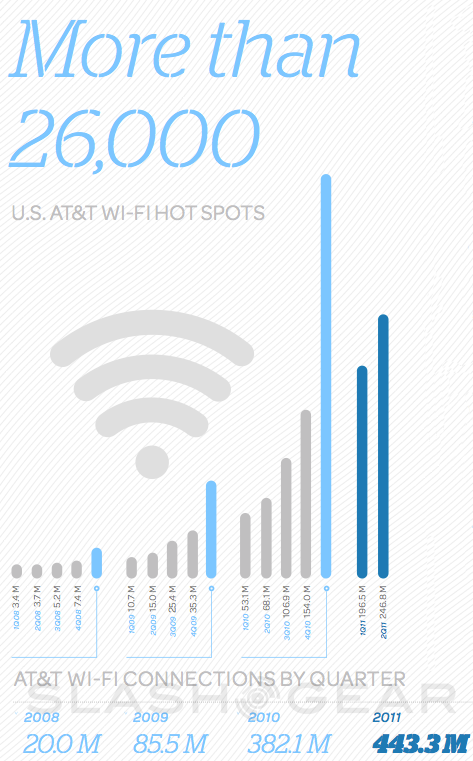 All possible, to one degree or another I suppose, and another important fact to remember is the following: AT&T is prominent in places like FedEx, McDonald’s and Starbucks, and the number of locations they’ve been activated has only increased at more than likely just as dramatic a rate as the numbers you see above. That said, build it and they will come!