Back at MWC 2012, it was revealed that only the European version of the HTC One X would be privy to NVIDIA’s quad-core Tegra 3 chip, while the American version destined for AT&T would instead be fitted with Qualcomm’s latest Snapdragon S4 dual-core processor. Those of you worried that a mere dual-core would be unable to compete with the might of a quad-core need not worry, as benchmarks have been performed on an AT&T HTC One X that made its way into the wild.

An Android Central forum member took the time to put the HTC One X through its paces. First is the Vellamo benchmark, created by Qualcomm to measure browser performance. As you can see, the AT&T HTC One X seems to demolish the competition, beating the quad-core ASUS Transformer Prime by a wide margin. Next was the standard Quadrant benchmark, which offered up an extremely healthy score of 4952. 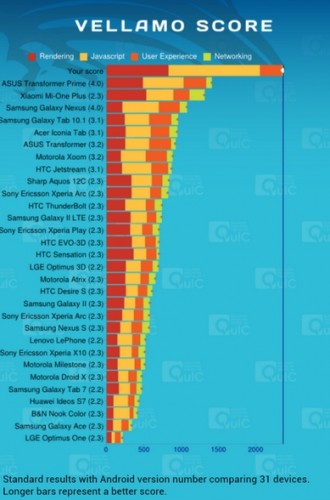 Granted, none of these are running on final hardware or software, so things are subject to change. While performance doesn’t seem to suffer at all, why does the AT&T version of the HTC One X have Qualcomm’s chipset instead of NVIDIA’s? It’s reportedly due to AT&T needing Qualcomm’s LTE compatibility. NVIDIA did announce a partnership with GCT Semiconductor and Renesas Mobile to bring LTE to NVIDIA chips, but right now Tegra 3 requires a separate LTE modem, whereas Qualcomm already have an integrated chipset.

There’s no release date set for AT&T’s HTC One X, although you’ll probably be able to purchase it sooner rather than later if test handsets have escaped the labs. Specs for the handset include a 4.7-inch 720p S-LCD2 display, Snapdragon S4 1.5Ghz dual-core processor, 1GB of RAM, 16GB of storage, eight megapixel camera with f/2.0 lens and 1080p video recording, all running on Ice Cream Sandwich with Sense 4.0.