Is the HTC One the best Android smartphone around, and has the wait for the AT&T LTE version been worth it? We’ve already spent more than 6,000 words on the HTC One, back in our review of the European version, but this was our chance to put the first US-specific variant to the test. To do that we took it out into the wild to put the key selling points – specifically the UltraPixel camera and the 4G speed – on trial at the New York Auto Show, among other places, as well as to see if the non-removable battery is a deal-breaker in the face of the fast-incoming Samsung Galaxy S 4. Read on to find out how the HTC One fared.

We’ve already comprehensively covered the core proposition of the HTC One in our original review. Suffice to say, the appeal of the matte-finish metal handset hasn’t waned since then. Build quality keeps it at the top of the pile of Android devices in recent memory, for a start, and having weighed the One against the Galaxy S 4 at the Samsung phone’s launch, it’s clear that HTC has the edge in design and quality. One mild concern is the tendency of the white polycarbonate inset strip running the edge of the phone to pick up color smudges when we kept it in our jeans pocket, though these usually rubbed off. 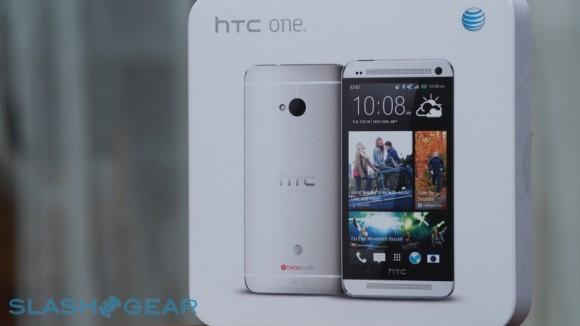 Some of the details stand out after a longer period with the phone. BoomSound has a ridiculous name, but we can’t argue with the audio performance: we’ve found ourselves showing off more video, as well as reaching for the One in preference to other devices when it comes to consuming multimedia from services like Netflix, simply because the front-facing stereo speakers are simply that good. The power from the speakers is also incredibly useful when using the One as a navigation device in the car, while the screen they flank is no slouch either, with a combination of 1080p Full HD resolution and a color balance that’s refreshingly level rather than skewed to over-saturation.

Sense 5 and the BlinkFeed homescreen – which pulls together news, Facebook, Twitter, calendar, and tips from the phone – continues to draw our attention, even with the gloss of newness taken off it. With its Flipboard-style feed of headlines and images, BlinkFeed makes for a great distraction, though we can’t help but wish HTC would hurry up and add offline caching of articles, the ability to add your own RSS feeds, and Google+/Google Now integration. The latter would arguably make the biggest difference; we like the low-noise way the One slots your upcoming appointments into the first page of BlinkFeed tiles each day, and it would make a perfect fit for Google Now suggestions. 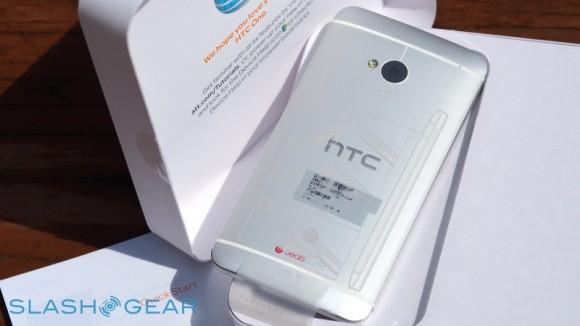 Overall, Sense 5 combined with Android 4.1 performs well, and with the exception of Photosphere we’ve not really missed anything from the very latest version of Jelly Bean. AT&T’s version of the One includes a customized browser, but despite our initial concerns, performance actually improved over the stock phone. In SunSpider, the test of JavaScript performance, the European One scored 1,118.9ms versus the 1,035.1ms of the AT&T version (in SunSpider, faster is better). Overall, we had no issues with the One’s quadcore 1.7GHz Snapdragon 600 processor pulling its weight running apps, and even AT&T’s preloaded software – which includes DriveMode, Family Map, Locker, Navigator, Ready2Go, Messages, myAT&T, Smart Wi-Fi, YPmobile, and Device Help – are neatly clustered into a folder rather than scattershot across the app launcher.

It’s not all perfect, though. A lingering frustration is the black menu bar that often appears in third-party apps, where HTC has followed Android guidelines and dropped a dedicated menu key, but apps aren’t yet putting the three-dot softkey where it should be, tucked out of the way in the corner. That means you lose a stripe of your 4.7-inch screen to a single control (the functionality of which varies widely) but, more annoyingly, the on-screen keyboard shifts up to accommodate it.

That has at times played havoc with our typing, our thumbs not extending sufficiently to avoid the menu key and thus interrupting text entry. Admittedly, it’s not HTC’s fault, but it’s an ongoing annoyance that apps not adhering to the latest Android UI guidelines continue to hit the Play store.

HTC’s UltraPixel strategy has proved divisive, with the company chasing more light instead of more megapixels. We’ve covered how the One uses its 4-megapixels extensively in our review, but we also gave the smartphone its chance to shine out in the wild, taking it to the New York Auto Show last month.

Your average tradeshow is tough going on a camera, whether it’s a DSLR, a point-and-shoot, or on a smartphone. The lighting ranges from ridiculously bright, meaning you get masses of reflections and glare, to moodily dark, making details difficult to pick out and the threat of noise a constant. In-between, there’s all manner of colored lights that can confuse a camera’s sensor. 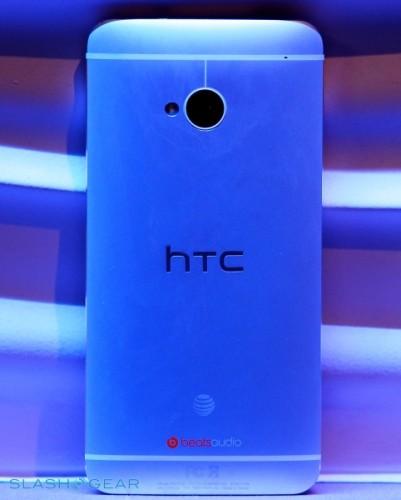 The NY Auto Show was no different, but the HTC One held its own for the most part. All of the photos and video from our coverage of the new Chevrolet Camaro Z28 and the Corvette Stingray was taken using the One, for example, with us also using the Zoe “highlight” feature that creates summary videos based on 3.6s snippets of video and burst-stills.

For the photos, despite the mixed lighting conditions, the quality was surprisingly high. Blur is noticeably absent, the One being able to stick to faster shutter-speeds and lower ISOs thanks to its greater appetite for light, and photos which combine well-lit areas alongside much darker ones are impressively balanced. The phone is fast, too: back-to-back shots are roughly as swift as you can repeatedly tap the on-screen button.

Video, meanwhile, looks great at 1080p Full HD resolution, with the same impressive low-light and mixed-lighting performance as for stills. However, the noisy show floor proved a challenge for the One’s stereo microphones at times, however: you can certainly make out speech compared to background noise, but it lacks the pinpoint clarity you’d get with a directional microphone or a dedicated clip-on mic.

Nonetheless, for immediacy and convenience, the One certainly held its own. At full resolution and in perfect lighting, HTC’s choice of big pixels rather than lots of them struggles somewhat, but in more everyday situations the convenience of being able to take low-light situations in your stride wins out.

The downside with the One – and, specifically, with Zoe photography, which simultaneously grabs 20 stills and 3.6s of Full HD video – remains how multimedia is managed, particularly off the phone. We’ve already highlighted how poorly that plays with auto-upload services, such as those offered by Dropbox, Google+, and Facebook, which basically fill your cloud storage with dozens of nearly-identical shots. The AT&T version is no different in that respect, and HTC desperately needs to step up and address offloading media with its HTC Sync Manager app.

While it’s at it, we wouldn’t argue with more themes and flexibility for the Zoe highlights system: the One’s automatically curated showreels, which come complete with transitions, filters, and background music. We’re still impressed by how neatly the One knits these together, but the option for longer clips (currently it’s 30 seconds only) and the ability to use your own music would make the feature considerably more useful. We’ve found people are much more willing to watch our photos and video when they’re stitched into a highlight reel, and so a greater number of presets (out of the box there are six to choose between) would make it all the more engaging.

One advantage those looking to AT&T for their One will have is capacity. The carrier has the US exclusive on the 64GB version, other networks making do with the 32GB model, and given the amount of data Zoe photography creates, and that there’s no microSD storage option, that makes a big difference. It’s not a cheap way to boost capacity, though: AT&T is asking $199.99 for the 32GB One, or $100 more to double the memory.

HTC’s BoomSound speaker technology means the One has no problems pushing out in-call audio, and happily performance on AT&T’s network matched up with that. We had no problems keeping a signal, even though HTC squeezes the One’s antennas into the tiny polycarbonate notches in the unibody case, and hardly a dropped call, even in areas where coverage was patchy. 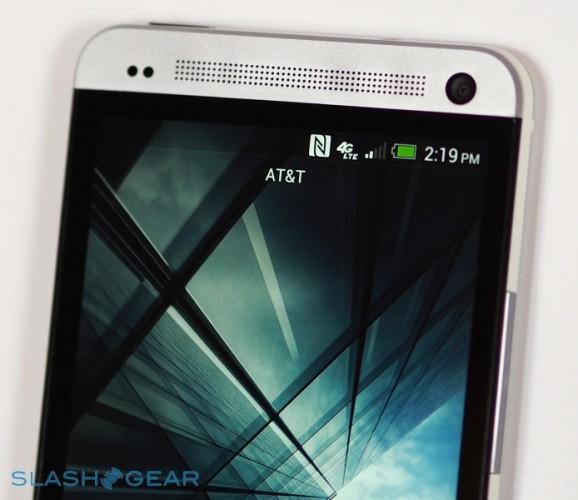 We tested LTE performance in multiple locations where AT&T currently offers service, including New York City, Denver, Wichita, and San Francisco. Speeds ranged from as much as 39Mbps downloads and nearly 19Mbps uploads, location depending, though averaged out at 15.95Mbps down and 7.06Mbps up. In contrast, we saw peeks of 37Mbps down and nearly 11Mbps up on an iPhone 5 using Verizon’s LTE network.

LTE has a reputation for being power hungry, and while the One’s 2,300 mAh battery isn’t small, the fact that it can’t be removed – unlike, say, the battery in Samsung’s Galaxy S 4 – has left some wary of the quadcore smartphone. In practice, we’ve found the One has sufficient legs to last through the day, particularly if its power management systems are turned on. These put data to sleep after periods of extended inactivity, waking them only occasionally to check for new messages and other updates, as well as reducing screen brightness and enabling other frugal systems.

Over the course of a sixteen hour day, then, with a mixture of cellular and WiFi connectivity, we saw roughly 30-percent of the battery left. More patchy use of WiFi saw LTE take a greater toll, with 20-percent left after just over twelve hours. However, even when we forgot to plug the charger in overnight, the One proved frugal, only dropping a few percentage points thanks to the data throttling.

Nothing about AT&T’s version of the HTC One has changed our positive impression of the smartphone. In fact, native LTE support for the US has only improved our takeaway opinion: the One is beautifully constructed, slickly designed, fast, has thoughtful software tweaks – a few third-party app UI glitches aside – and a great, flexible camera. 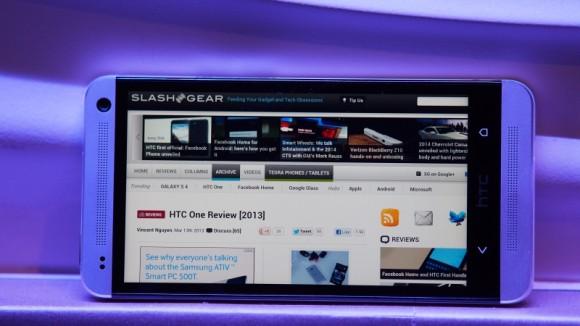 The road ahead for HTC isn’t going to be an easy one. Samsung’s Galaxy S 4 is the specter on the near horizon, and for however much it may offer an evolutionary step up from its Galaxy S III predecessor, it comes with the might of the South Korean company’s prodigious marketing machine (and its equally massive budget). In contrast, the One sees HTC take a far greater risk than it has in recent years – in investment in construction, camera strategy, and software – and, for the most part, that pays off in the quality of the overall device.

The Samsung Galaxy S 4 is, if last year’s model is anything to go by, likely to be the default choice for Android buyers in 2013. However, the HTC One is arguably the more thoughtful choice. In AT&T form, it’s our favorite Android handset of the moment.