A new gadget that warns of potential hot car deaths of babies and pets could cut tragic cases like the Justin Ross Harris indictment last summer, with an AT&T intern already cooking up a prototype. The handiwork of Nancy Dominguez at the carrier’s Foundry innovation center, the sensor uses a combination of motion, carbon dioxide, and temperature detection to spot if a dog or a child has been left in a vehicle, figure out whether conditions are getting too hot inside, and then fire out a warning message if things are getting dangerous. If unaddressed, the system can even call in 911.

Several stages are involved. First off, the carbon dioxide and movement sensors track whether someone or something is actually in the car: by pairing the two, even if a baby is strapped in a car seat and thus can’t be spotted moving, it should still be identified.

A message warning that there’s an occupant would be triggered automatically, and then the system would monitor temperature and alert if heat levels rose dangerously. If the registered caregiver didn’t respond in a timely manner, the alarm could contact the emergency services. 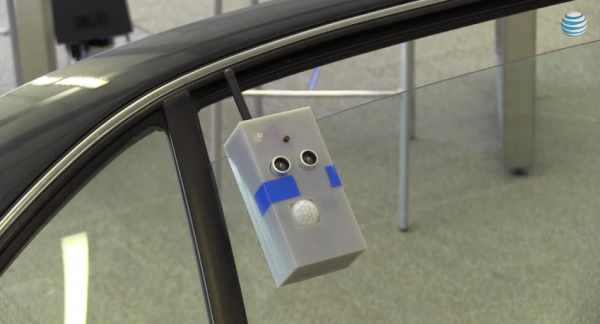 Of course, it’s not just AT&T which could produce a device like this; in fact, as cars become more connected, there’s no reason why they shouldn’t start whistle-blowing on incidents themselves. Many models already have cabin temperature sensors, for the automatic climate control, and adding a carbon dioxide sensor wouldn’t be too great a stretch.

Alternatively, ultrasonic motion sensors normally used for car alarms, or even the seat sensors that activate airbags depending on if passengers are in place, could be repurposed to figure out if the vehicle was occupied.

AT&T suggests that the same technology could be used as a car alarm in its own right, and while there’s no indication of whether it’ll make it past the current prototype stage to a commercial device, there’s certainly scope for retro-fitting older cars.