Atlona Technologies have announced the HDAiR, a wireless USB to HDMI or VGA adapter which allows cable-free connectivity to a display from up to 30 feet away.  Using UWB, up to 720p or 1440 x 1200 resolution video can be transmitted from a Windows XP or Vista PC; unfortunately that means that wireless 1080p Full HD video still isn’t possible.

The HDAiR uses the same Wisair wireless display technology as that company’s own USB Display Adapter, announced back in January.  However unlike the Wisair device, which only output to HDMI, the Atlona Technologies adapter has both HDMI and VGA outputs, offering more flexibility for use with displays, HDTVs and projectors.

You pay for that flexibility, however.  While the Wisair HDMI-only version has an MRSP of $129, Atlona Technologies’ HDAiR is priced at $199.  The companies claim to be working on a range of adapters, such as for printers, input devices and audio receivers, that will be compatible with the existing transmitter. 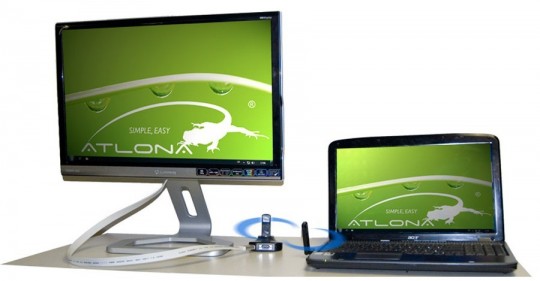