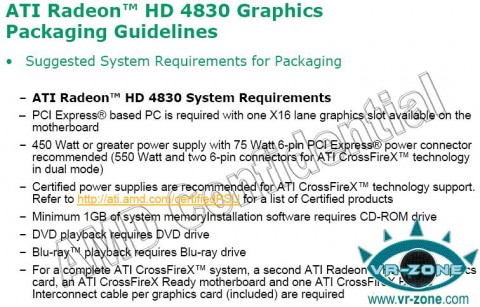 A PCI Express card, the HD 4830 will require a minimum 450W PSU and be compatible with ATI CrossFireX.  It will have built-in HDMI with 7.1 surround sound support and come with a Blu-ray decoder.

The ATI Radeon HD 4830 is expected to launch on October 21st.  Pricing is, as stated, believed to be sub-$150; considering the NVIDIA GeForce 9800 GT retails for around $130, it seems likely AMD would continue the pressure by also aiming for that figure.