ASUS’ dual-screen laptop has had a CES 2021 revamp, with the Republic of Gamers Zephyrus Duo 15 SE keeping the twin displays but throwing in more screen options and faster processors. As before, there’s a 15.6-inch main display on top, with a 14.1-inch secondary display underneath, on a tilting panel just above the keyboard.

That – branded ASUS’ ScreenPad Plus – not only lifts the secondary screen for a more usable experience, it also helps with airflow for laptop cooling. ASUS envisages gamers using the panel for broadcast controls, messaging, toolbars, and other functions, so that the primary display is left clear for maximum gameplay.

For the ASUS ROG Zephyrus Duo 15 SE, however, there’s a new main screen option. Buyers will now be able to choose a 4K panel with a 120 Hz refresh rate and full Adobe RGB color space coverage. Alternatively, there’s a Full HD panel which has a whopping 300 Hz refresh rate and 3 ms response time. Regardless of which you pick, there’s Adaptive-Sync to match panel refresh rate with GPU frame rate. 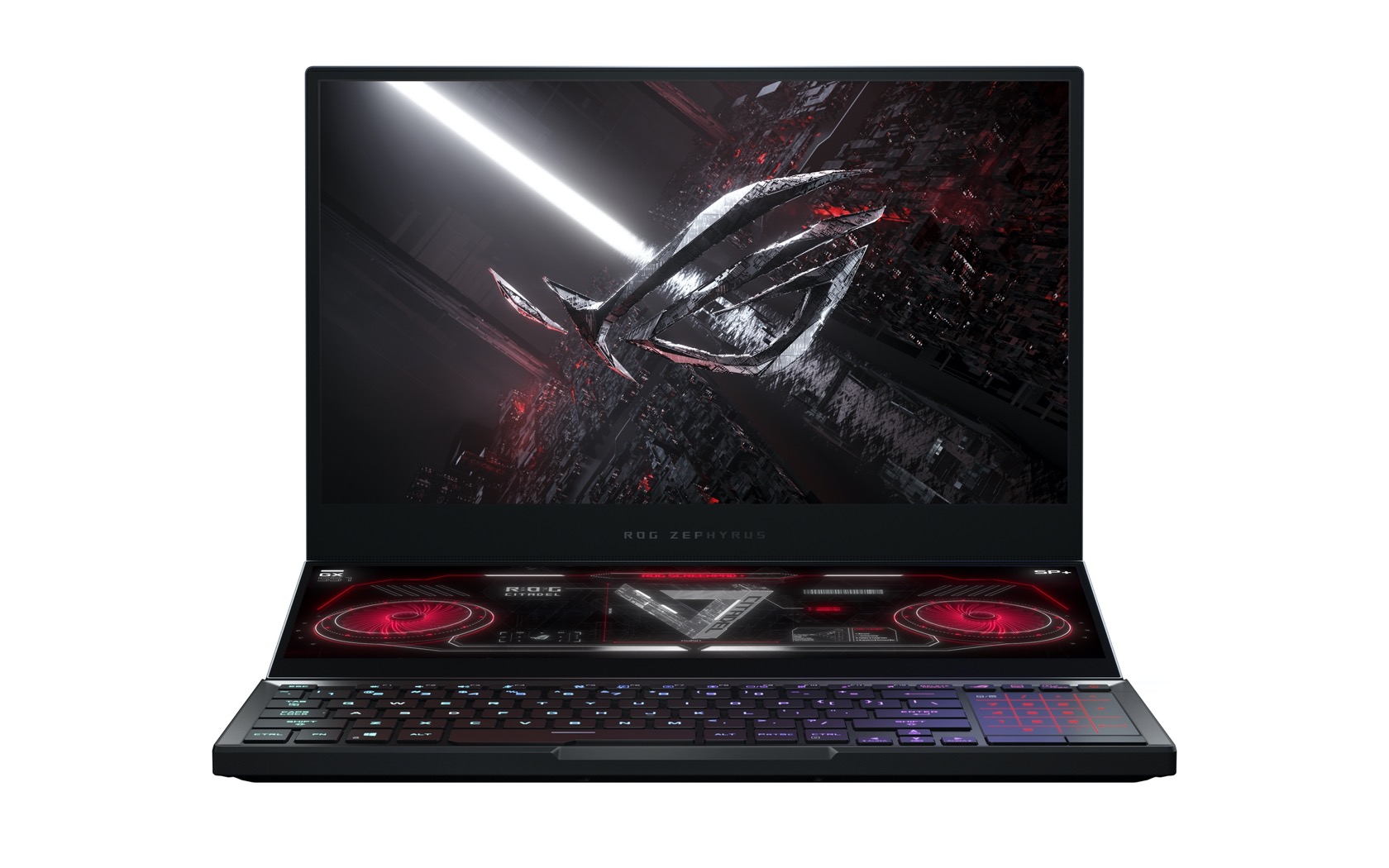 Driving all that is a new set of internal components. There’s the option of up to a NVIDIA GeForce RTX 3080 GPU, with 115W support using ROG Boost, and a further 15W from Dynamic Boost. It can be paired with up to 16GB of dedicated GDDR6 video memory.

As for the processor, there ASUS has looked to the AMD Ryzen 9 5900HX, with 8 cores and 16 threads. It can crank p to 50W of sustained power with the GPU active, or 90W on its own; Turbo mode automatically bumps the clock speed by a further 200 MHz. It’s combined with up to 32GB of DDR4-3200 memory. 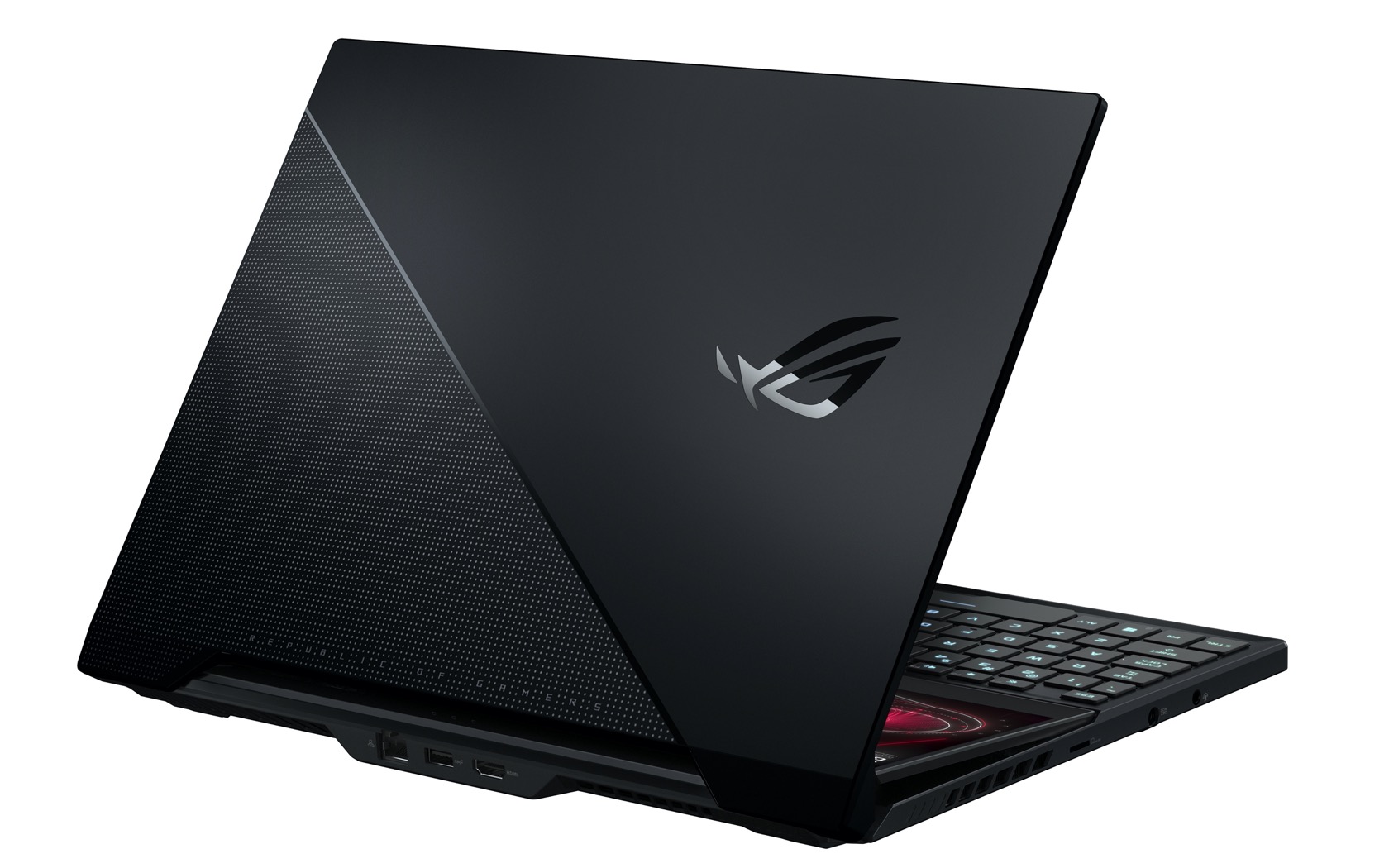 For storage, there are dual NVM Express PCIe x4 SSDs in RAID 0 configuration, with ASUS offering up to 2TB in total. Both drives can connect to the processor simultaneously, without sharing bandwidth, for a maximum 7,000 MB/s transfer rate.

Dedicated volume and microphone hotkeys have been added, and there’s a touchpad that also flips over to digital numpad mode for easier entry. Per-key RGB lighting is also supported. The whole thing tips the scales at 5.3 pounds and is 20.9 mm thick: no, it’s not going to be mistaken for an ultraportable any time soon, but with a 90 Wh battery and fast-charging that can go from flat to 50-percent in 30 minutes, that’s not bad at all for mobile gaming. The laptop also supports up to a Type-C 100W power supply which, though not potent enough to support it at maximum power like the included AC adapter, is still sufficient for throttled use.

ASUS is already taking preorders for the ROG Zephyrus Duo 15 SE, with the notebook priced from $2,899.99.