As it said it would back in September, ASUS just unveiled its smartphone-in-a-tablet PadFone 2 in Taiwan, showing off its sleek design and upgraded specs. This unique tablet/smartphone combo features a smartphone that slides into a slot on the back of its accompanying tablet. The PadFone 2 features many upgrades over the original PadFone, getting everything right that the original fell short of.

The smartphone features a 4.7 inch Super IPS+ 720p display, a quad-core APQ8064 Qualcomm processor, and a 13MP BSI Sony camera sensor, as well as a 1.2MP front camera for chat sessions. Speaking of the camera, it records 720p at a whopping 60fps, which is outstanding, and 1080p at 30fps, and can take up to 100 continuous full-resolution images. The slate itself is much thinner than the original PadFone slate, and lacks the docking bay cover.

Other features include 2GB of RAM, a 2,140mAh (fixed) battery, the same Corning Fit Glass used on the Nexus 7, NFC, and 50GB of Asus WebStorage. Sadly, there isn’t a microSD card expansion slot. As for connectivity, the PadFone 2 has WCDMA 900/2,100MHz radios, and LTE 800/1,800/2,600MHz radios in the global model. According to Engadget, the LTE model will be available for North America, Australia, and Japan. For now, the device runs Android Ice Cream Sandwich, but ASUS says a Jelly Bean upgrade will be available soon. 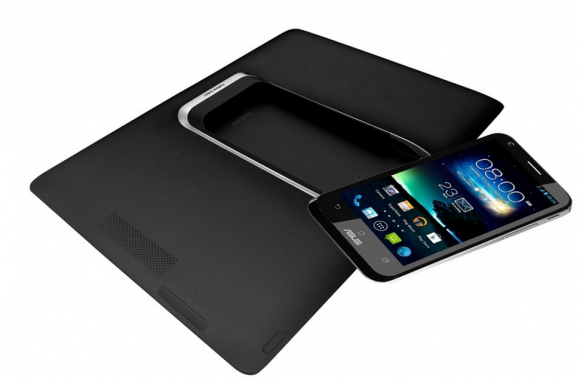 As for the slate itself, it measures in at 10.1 inches with a 5,000mAh battery, and a weight (sans smartphone) of 514 grams. With the smartphone attached, the weight increases to 649 grams, which is over 200g lighter than the original PadFone. The PadFone 2 will be available in Taiwan “as early as next week,” and can be purchased without the slate Station for the USD equivalent of $620 to $750. With the Station, the price jumps another $200 or so. According to Engaget Chinese, Hong Kong will be the launch point of the PadFone 2, with no word on where its headed after that.