ASUS’ next-gen all-in-ones have been spotted at CeBIT 2010 this week, lurking at the company’s booth.  Two new models were on show, the EeeTop ET2010PNT first tipped back in January, complete with NVIDIA Ion 3 graphics, and the EeeTop ET2010AGT with an AMD Athlon II X2 250u processor and ATI Radeon HD 5470 graphics.

Both all-in-ones have 20-inch displays running at 1600 x 900 resolution, as well as optional multitouch-capable touchscreen layers.  The ET2010AGT pairs its AMD processor with up to 8GB of memory and DirectX 11 support, and will be available as the non-touchscreen ET2010AG as well.

As for the ET2010PNT, that has an Intel Atom D510 dualcore CPU together with 2GB of memory (4GB max) and a 500GB hard-drive.  There’s also a DVD burner and WiFi b/g/n, and as with its sibling there’ll be a non-touchscreen version in the shape of the ET2010PN.  No word on pricing nor availability for either machine. 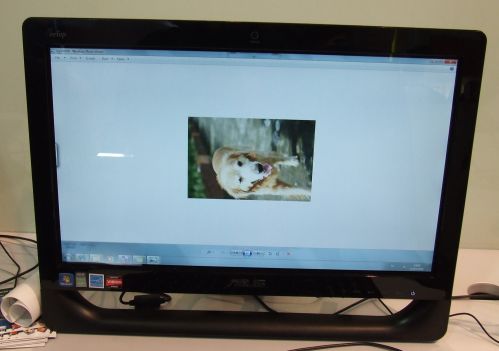