At first glance, ASUS’ Eee Top ET1602 is the epitome of a niche product.  Packing nettop-spec hardware in an all-in-one form factor, with a touchscreen and general design that seem to have stopped by HP’s TouchSmart and the Apple iMac along the way, it’s certainly tough to pin down.  Innovative new segment or just another Eee oddity: SlashGear set to finding out.

In the box, ASUS include a wired keyboard and mouse, stylus and a printed manual, together with recovery DVDs and a microfiber screen cleaning cloth.  Two color versions of the Eee Top are available, white and black, with otherwise identical hardware specs.

First impressions are positive.  Despite the relatively budget price for the Eee Top, ASUS have managed to eke out more than a little style from its plastic casing.  Held upright by a strong, spring-loaded metal leg, the body of the Eee Top is white gloss-finish plastic sitting in a transparent tray.  Stand (and carry handle) aside, the nettop is just 4cm thick; along the back run gigabit ethernet, four USB 2.0, power, microphone, line-in and headphone ports, plus a Kensington lock hole.  On the left-hand side there are a further two USB 2.0 ports, plus a multiformat memory card reader. 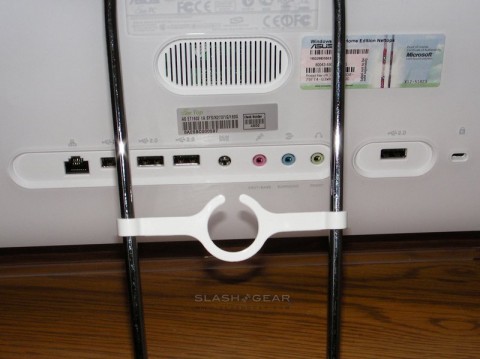 Underneath the touchscreen there are buttons for brightness and volume on the left, while the power and screen toggle are on the right.  LEDs indicate WiFi and hard-drive activity, and in the bottom bezel there are stereo speakers.  A webcam and microphone are at the top above the screen.  The Eee Top has vents running across the top and in the center on the back.

Using the included peripherals and a WiFi internet connection, you can reduce cabling to just two wires: power and one USB for the keyboard.  The mouse, not entirely necessary if you’re devoted to the touchscreen, can plug into a USB port on the keyboard; on the opposite side there’s a pop-out stylus in a spring-loaded bay.  ASUS’ keyboard is surprisingly weighty and pleasant to type on.  It follows the same isolated keys as first seen on some Sony laptops, and although lacking a separate numeric keypad the rest of the keys are full-sized.  Several have Fn-triggered secondary features, including volume and music control, backlighting, sleep and WiFi, launching the webcam app, toggling through performance modes (more on that later) and changing the Eee Top’s blue underlighting.

The mouse is less impressive, a lightweight blue LED model with scroll-wheel.  It’s usable, and the design echoes the white & transparent plastic of the Eee Top’s build, but nothing special.  As for the stylus, it’s a basic 14cm stick of plastic with a tapered nib; the only thing worth noting is the strength of the bay spring, which is enough to launch the pen across the desk.

Despite looking a whole lot more grown up than any netbook (and taking up more of your workspace), the guts of the Eee Top are in fact on a par with any of the company’s more recent budget ultraportables.  That means a 1.6GHz Intel Atom N270 processor, 1GB of RAM and a 160GB hard-drive.  WiFi is b/g/n, but the graphics still use Intel’s GMA 950 onboard chipset and there’s no optical drive.  Of course the primary difference is the 15.6-inch touchscreen display, running at 1366 x 768 resolution.

The display uses a resistive touchscreen, rather than either a capacitive panel such as on recent Tablet PCs from HP and Dell, or an active digitizer as on most other Tablet PCs.  That means the screen responds to any touch, rather than requiring a finger or a special stylus, but only one point of contact rather than multitouch.  Responsiveness in the Eee Top’s case is good, with only a light touch required, and it soon becomes second nature to stab at the screen rather than reach for the mouse.

Of course, the usefulness of finger-input depends largely on software, and here the Eee Top is a mixed bag.  ASUS preinstall Windows XP, the  Home version rather than the Tablet PC edition, which is not known for its touchscreen-friendliness.  To solve that, you get Easy Mode, a large-icon launcher which runs automatically when you start the PC.  Four tabs – Communication, Fun, Work and Tools – give access to the preloaded apps, including StarSuite for office tasks, Skype for VoIP, and both Internet Explorer and Opera.  There are also a number of ASUS-specific apps, including games, and software for on-screen keyboards, handwriting recognition and other touchscreen-control.  Unfortunately there’s no apparent way to add new apps to Easy Mode, nor to change which tab each shortcut is in. 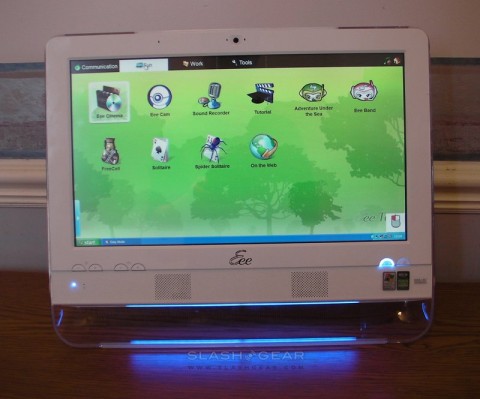 Easy Mode certainly makes loading software straightforward; however the apps themselves vary in their usefulness with the touchscreen.  As is usually the case, the ASUS-specific titles are most user friendly, with large buttons and straightforward drag & drop usability.  Others, such as the calculator, drop you into XP’s standard GUI: controls sized for mouse use.  There’s a sense of ASUS stopping development when Easy Mode was just usable enough: the Eee Memo app, for instance, which lets you drag down virtual Post-It notes and write reminders and messages on them, would make far more sense if the notes were visible all the time.  As it is, leaving a message for someone relies on them starting up the Eee Memo app.

ASUS’ could also do with making common tasks like screen calibration more straightforward.  There’s a “Touch Utility” listed in the Tools tab, but users will have to guess that “9 points linearity” actually means “calibrate the screen for your finger”.  An option underneath that, to test the touch panel, is cryptically labelled “Please drawing”.  Motorola’s SoftStylus is preinstalled, for handwriting recognition and an on-screen keyboard.  The latter works as you’d expect, with a resizeable, translucent window and shortcut keys for things like www.; however the handwriting recognition is barely usable.  Only individual letters are recognized at a time, rather than full words, making for a painfully laborious experience.  We’d much rather have seen XP Tablet Edition, with its surprisingly adept handwriting and voice recognition, though Microsoft licencing issues probably prevented that.

In use, the 1.6GHz Atom processor means the Eee Top is not going to threaten machines with similar form-factors, such as HP’s TouchSmart or Apple’s iMac.  Nonetheless, it’s perfectly capable of sustaining a couple of web browser windows, each with multiple open tabs, without unduly slowing.  The absence of an optical drive means the ASUS is unlikely to be asked to do any serious media lifting; however it happily played back a 720p high-definition video from the hard-drive (anything higher resolution caused stuttering).  Screen quality is fair, although the panel tends to look washed out when viewed from the top.  One point of concern was a pixel-width blue line that appeared down the left-hand side of the display after the Eee Top had been switched on for a while, and which only a reboot would dismiss.  It’s unclear whether this is a graphics problem due to heat build up.

As on their netbooks, ASUS has given the Eee Top three different power modes: super performance, high performance and power saving.  These can be switched between either through the Easy Home interface or by the Fn+Space shortcut.  In practice, there’s little noticeable difference between the three; nothing can disguise the fact that the Eee Top is no media editing or 3D gaming machine.  As a media extender though, with a high-speed network connection, it comes into its own; another of the ASUS apps is Eee Cinema, a media-center style GUI for accessing audio and video.  It’s here you’ll most miss an optical drive, as Eee Cinema even has an option to watch DVDs.  Still, sound quality from the built-in speakers is reasonable. 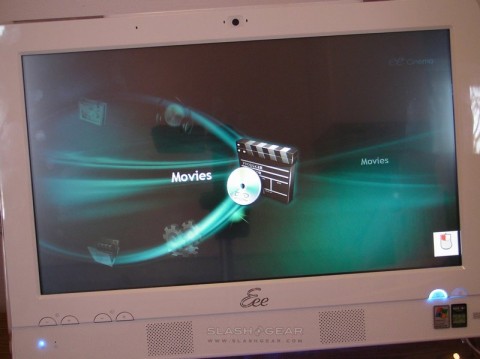 Also preloaded is a webcam app, that lets you record video and take photos using the Eee Top’s 1.3-megapixel camera.  Image quality is as mediocre as you might expect from an integrated webcam, but the app has a number of effects and animated overlays to brighten things up.  These range from frames and color-effects, such as sepia, through Batman-style “Pow!” flashes, to being able to draw onto video and images.

In the end, though, we’re surprisingly impressed by the Eee Top.  The display may be relatively small compared to what many people have on their desktop nowadays, but given you need to be sitting within comfortable prodding distance it’s less of an issue.  It also makes the Eee Top more portable; toting it between rooms is no hardship, and the next-generation model, tipped to have an internal battery, should make that even more straightforward.  Even sucking up your mains power, its frugal 27W demands mean the Eee Top is more economical than a standard desktop PC.

Similarly, as long as you’re not looking for high graphics performance, the Eee Top handles web browsing, office chores and media playback with little complaint.  ASUS, incidentally, are planning a separate ATI Radeon HD 3450 video option in the next-gen machine.  The touchscreen implementation may not be perfect, but it’s certainly usable and the price is far less than HP would ask for a TouchSmart PC.  For the same cost as the Eee Top you could obviously find a higher-spec standard desktop PC, but the ASUS’ design charms, touchscreen and general usability still make it a tempting buy.