While we put the ASUS Eee Pad Transformer TF101 through its paces for the full SlashGear review yesterday, what we didn’t mention was ASUS’ official Sleeve Case with Smart Stand for the tablet. Like the iPad 2’s Smart Cover, the Transformer Sleeve Case promises not only to protect your slate – while adding as little bulk as possible – but prop it up for media playback or on-screen typing. Read on to find out whether we reckon it’s worth the money.

Rather than leather or vinyl, which can be bulky, ASUS has used a rubberized fabric for the Transformer Sleeve Case, finished in dark grey with a flocked inner lining to avoid scratching the rear of the Eee Pad. Of course, without Apple’s array of nifty magnets, ASUS relies on more traditional methods to keep the sleeve in place. The tablet slides into the case at the fold, with a flap of material that tucks in to keep it there. It’s a snug fit, so we don’t have any concerns of the Transformer tumbling out. A tiny piece of Velcro keeps the front cover closed.

ASUS has provided cut-outs for almost all the ports: there’s a slot in the flap for the power/sync cable, notches on both edges for the HDMI and headphones sockets, as well as the power/lock and volume keys. On the back is a hole for the 5-megapixel rear camera, so that you can shoot photos and video without removing the slate, while the front-facing webcam isn’t covered by the case’s bezel. In fact the only things blocked are the microSD card slot and the docking clamp holes along the bottom edge; even the speakers get a perfunctory double-line of holes so that you can hear them. 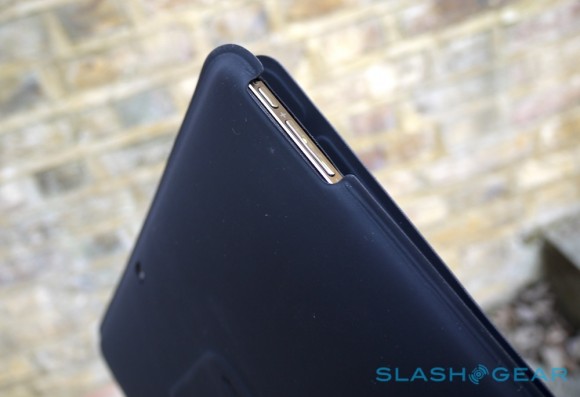 What you can’t do, however, is use the Sleeve Case and the Eee Pad Transformer’s Keyboard Dock at the same time. Even if the slate’s docking clamp ports were open, the case – despite being close-fitting – adds too much bulk to slot in. Now, admittedly we can’t see many people choosing the carry both the Keyboard Dock and the Transformer separately, since you may as well click them together and then drop the ensuing smartbook-replacement into a netbook sleeve, but it does add an extra fumble if you suddenly decide you want to hammer out a longer email.

Still, as with the iPad 2 Smart Cover, the ASUS sleeve props the Honeycomb tablet up at two angles, one of which is intended to make typing with the on-screen keyboard more straightforward. The front panel bends back, folds, and the edge tucks into the flap on the rear of the case. With the resulting wedge at the top, the Eee Pad is held up at a shallow angle for typing; stood up on the wedge, and it’s useful for standalone media viewing. It’s a little more fiddly than the Smart Cover’s magnets, but works reasonably well all the same. 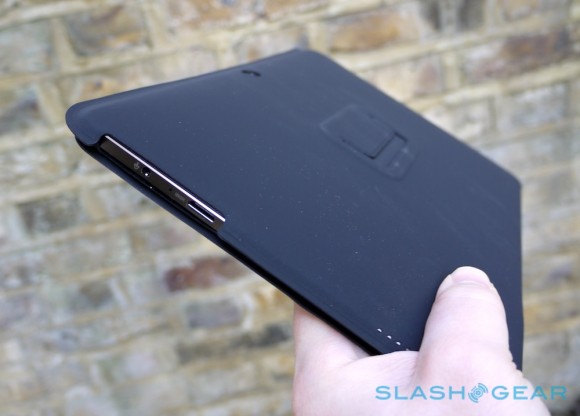 Upright it feels stable, though we were conscious that tapping the touchscreen could make the Transformer rock back in a mildly concerning way. A steadying hand made us feel a little safer. We’d consider the ASUS Sleeve Case more of a scuff-preventer than true all-purpose protection, though given the Gorilla Glass and the generally sturdy build of the tablet itself, perhaps it’s all that’s required for dropping the Eee Pad into a bag.

At $39.99 or £39.99 in the US or UK respectively, ASUS is asking more than Apple does for a Smart Cover. On the one hand, the Transformer Sleeve Case does protect the back and edges of the Android tablet, which the Smart Cover leaves open on the iPad 2; on the other, it lacks the clever magnetic clasp and automatic wake-from-standby that Apple offers. We’re guessing that many will bypass it altogether, given that it seems intended for those without the Keyboard Dock accessory. In the end, while it works as billed, the cost doesn’t seem to line up with the Transformer’s own competitive price tag. The ASUS Sleeve Case with Smart Stand works, but it isn’t the obvious buy that the Eee Pad itself is.

For more on the Eee Pad Transformer, check out the SlashGear review.