We’ve a soft-spot for DIY netbook tablet PC conversions here at SlashGear, so it’s always nice to see a user turn their budget notebook into something a whole lot more interesting.  EeeUser forum member Maine_Coon turned his ASUS Eee PC 900HA into a finger-friendly 8.9-inch slate, flipping the display around and adding a touchscreen layer on top.

Whereas adding a touchscreen to a netbook is something we’ve seen done across various manufacturers and models, fewer owners go the extra step to turn their netbook into a keyboard-free slate design.  Those that do generally start from a 7-inch Eee PC rather than the larger 900HA; however according to Maine_Coon his mod was even easier, by virtue of the display cable being longer and thus easier to twist around.

As for the two-tone casing, that’s because he mixed components from a black 900HA and a white 900H.  The 900HA was the primary donor for its capacious 320GB hard-drive and 2GB of RAM. 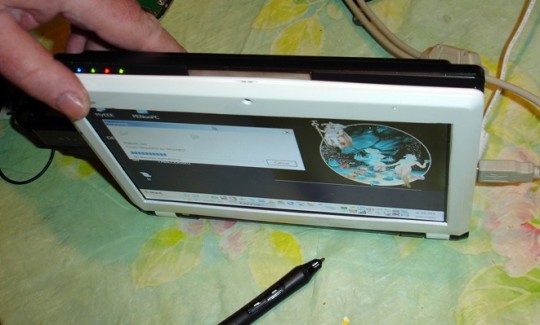 [via Tablets for the Net]