Two new NVIDIA Ion nettops have been unveiled in Taipei, from ASRock and Pegatron.  The ASRock ION 330 eschews the single-core Atom CPU as found in the Acer AspireRevo and instead pairs the NVIDIA GPU with a dual-core Atom 330.  There’s also an integrated DVD optical drive, where the AspireRevo has to use an external USB drive.

As for the Pegatron Cape 7, full specifications are unknown – including which processor the company has used – but it’s a more compact nettop than the ION 330 and closer in appearance to Acer’s machine.  Connectivity includes HDMI, ethernet and at least four USB 2.0 ports, though we’d doubt there’s room for an optical drive of any sort.

There’s no word on pricing or availability, but NVIDIA have previously claimed to have several Ion customers looking to release products using the GPU this year.  Considering early criticism of the Aspire Revo is that its Atom CPU lets down the nettop’s overall performance, the dual-core ASRock ION 330 could well prove to be the better machine. 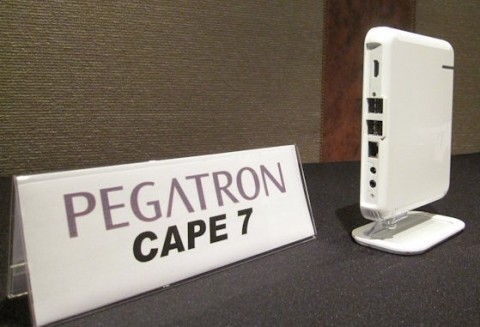