Today the U.S. National Science Foundation announced they’d be initiating deconstruction of a major landmark. The Arecibo Observatory Telescope saw two major cable failures in the year 2020. Because of the cable failures, the structure has been deemed too dangerous to repair, and will be decommissioned in the near future.

The first (auxiliary) cable failed in August of 2020, at which time three engineering firms were hired to access the telescope and the future of the structure. On November 6, 2020, a “main cable break” occurred. This second cable break called into question the structural integrity of the telescope in a major way. 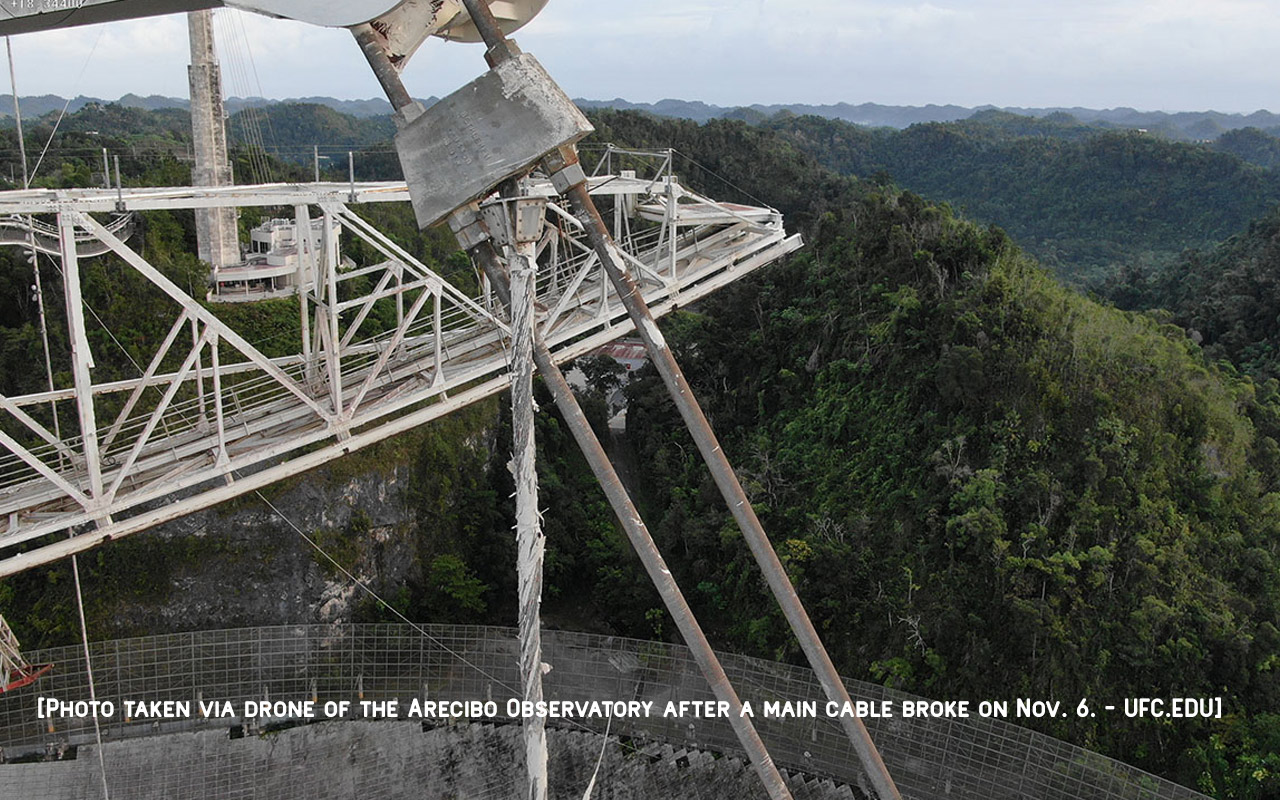 Per UFC.EDU, the cable that failed at the facility in August “slipped out of the socket.” The main cable that broke here in November “broke and fell onto the reflector dish below, causing additional damage to the dish and other nearby cables.” Both cables were originally connected to the same support tower.

The three engineering firms hired to access the first cable failure earlier this year submitted reports to the NSF this month. Thornton Tomasetti, “engineer of record,” recommended that the telescope be decommissioned because the telescope structure was in danger of catastrophic failure.

Per a report today from the University of Central Florida, the two other review groups concurred with the report from the first. All concurred that “pursuing repairs posed a risk to human life.”

“Our team has worked tirelessly with the NSF looking for ways to stabilize the telescope with minimal risk,” said Alexander N. Cartwright, UCF President. “While this outcome is not what we had been working towards, and we are disheartened to see such an important scientific resource decommissioned, safety is our top priority.”

This is not the end for the entirety of the facility and its various scientific tools. Decommissioning includes bringing the telescope down, including the Gregorian Dome and the platform. The plan also includes keeping as many other parts of the facility “intact for future use.”

The NSF intends to restore the LIDAR facility at Arecibo as well as the visitor center AND the offside Culebra research substation in the weeks and months (and possibly years?) to come. “For nearly six decades, the Arecibo Observatory has served as a beacon for breakthrough science and what a partnership with a community can look like,” said NSF Director Sethuraman Panchanathan. “While this is a profound change, we will be looking for ways to assist the scientific community and maintain that strong relationship with the people of Puerto Rico.”